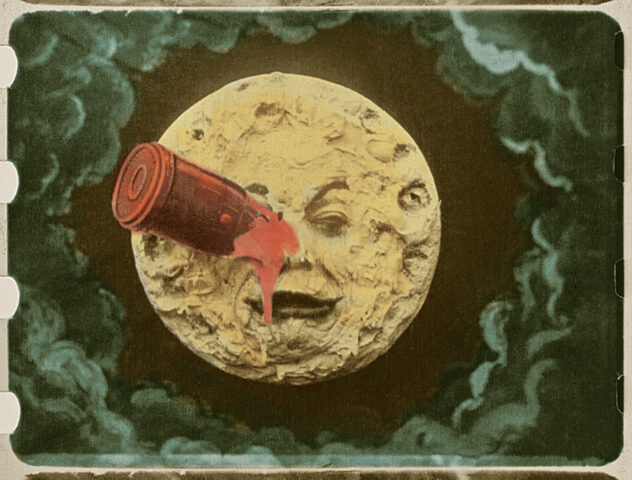 In 1969, the astronauts aboard Apollo 11 made history by becoming the first people to set foot on the moon. Unbeknownst to them, this year also marked the arrival of the first works of art to the lunar surface—The Moon Museum. Covertly orchestrated by members of the group Experiments in Art and Technology, a miniscule ceramic tile bearing reproductions of artworks by six artists was snuck onto the lander. A rare original tile, featuring work by Robert Rauschenberg, Andy Warhol, Claes Oldenburg, Forrest Myers, David Novros and John Chamberlain, will be on view in The Distance of the Moon.

On the occasion of the 50th anniversary of the moon landing, this exhibition examines the moon through the lens of photography and video. From Georges Méliès early film Le voyage dans la lune(1902) to Robert Longo’s striking study Untitled (Moon in Shadow) (2006), the moon has served as an important touchstone and inspired countless works of art and imagined lunar voyages. Utilizing images from exploratory missions to the moon, Nancy Graves created an immersive filmic meditation on surface textures and sonic space. Over forty years in the making, James Turrell has slowly transformed a dormant volcano into an aperture for observing the moon and other heavenly bodies.

Moody nocturnes and celebratory renderings are shown alongside early stereographs of the full moon, made possible by the most advanced photographic technology of the day. Combining historic prints with modern images of the lunar surface taken by NASA on a series of exploratory missions, The Distance of the Moon considers the relationship between artistic impulse and scientific discovery, and our collective fascination with this celestial body.

The Distance of the Moon is organized by the Akron Art Museum with support from the John S. and James L. Knight Foundation, Ohio Arts Council and the Char and Chuck Fowler Family Foundation.