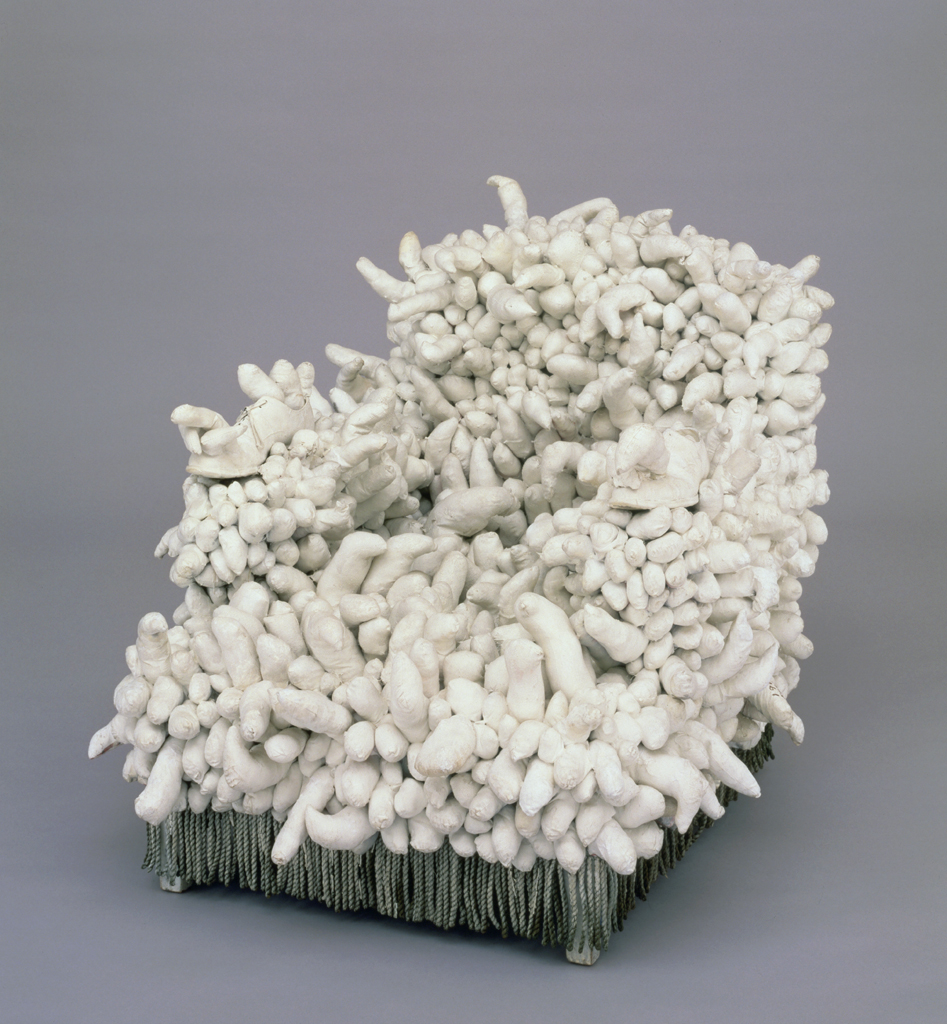 Acrylic on chair, shoes and sewn and stuffed cloth pouches

These are from Yayoi Kusama’s first body of sculpture, which the artist described as “accumulations.” She covered utilitarian objects with masses of phallic stuffed and sewn cloth pouches and painted them either a single color or with polka dots. Symbols of traditional female roles—domestic objects and the activity of sewing—are joined with male protrusions. In Kusama’s work, everyday objects merge with biology gone awry in a surreal world leavened by humor but dominated by obsession.

Yayoi Kusama Arm Chair, 1963 Collection of the Akron Art Museum Yayoi Kusama has had an erratic but distinguished career. She spent eighteen years in the United States, The Netherlands, and Germany, energetically seeking artistic recognition as well as freedom from Japanese constraints on women. Even more disruptive than her sojourns abroad have been her continuing struggles with physical and mental illness, to the point that she lives and works mostly at Seiwa Hospital, where she has her own studio. Besides making paintings and sculptures, Kusama also writes poetry and fiction. In 1992 she was chosen to represent Japan at the Venice Biennale. British critic Herbert Read describes Kusama’s works as “images of strange beauty that press on our organs of perception with terrifying persistence.”1 Her long obsession with repeated forms and grotesque eroticism is well illustrated in Arm Chair. This work is from her first significant body of sculpture, which she originally called “accumulations.” These consist of common household items—chairs, strollers, suitcases, sofas—upon which masses of stuffed and sewn cloth protrusions have accumulated. Akron’s chair is painted a soft white. Many other works are silver; some have brightly colored stripes or polka dots. The use of repeated elements is a key ingredient of Kusama’s intense art. Arm Chair is smothered with phallic forms like metastasizing tumors, creating a visual equivalent of Kusama’s obsessive-compulsive disorder. She accentuates the psychological edge by choosing a domestic object often associated with femininity and security and invading it with aggressive male forms. Paradoxically, these uncontrollable phalluses have been created through sewing, a traditional female craft. Arm Chair updates the precepts of Surrealism, particularly in its revelation of subconscious sexual associations. Kusama’s phallic protrusions, however, are more than personal fetishes. They recall the 1960s fascination with sexual titillation that was an ingredient of Pop Art (especially the soft sculpture of Claes Oldenburg [see pp. 184–85]) and much experimental theater. In New York, Kusama created numerous counterculture “happenings” involving nudity. However, she eschews Pop Art’s frequent references to media and popular culture. Instead, she locates her work in the home, introducing a distinctive feminist vocabulary into the overwhelmingly male world of Pop Art. Baby carriages, strollers, arm chairs, sofas, all produce a nightmarish vision of domesticity gone awry. Tumescent sexuality invades what should be soft, innocent, or comforting. Kusama has said that her formal vocabulary derives from her psychological conditions. She even refers to her work as “psychosomatic art.” Of the phalluses, she explains that she was terrified of men as a teenager yet was also obsessed by sex and thus developed an extreme fear of anything phallic. “As a way of either freeing myself from my obsession or neutralizing it, I obliterate the surface of my works with protruding phallic objects.”2 While Kusama’s art certainly reflects her illness, she orders and channels her compulsions into something that is consciously art, not therapy. If her obsessiveness is offputting, Kusama’s exploration of fear and desire is cleverly tempered by humor. In Arm Chair the shoes resting on the arms of the chair create a visual pun. Kusama exploits the classic alternation between attraction and repulsion: soft materials seem ready to attack; chairs would be destroyed if sat upon; silliness is mixed with sexual threat. She clearly enjoys the opportunity to scandalize. - Mitchell D. Kahan, 2001 1. March 13, 1964, statement by Herbert Read, in Karia, ed., 84. 2. Statement by the artist, in "The Question of Gender in Art," Tema Celeste: Contemporary Art Review 39 (winter 1993): 50. Adams, Brooks. “Proliferating Obsessions.” Art in America 78 (April 1990): 228–33. Karia, Bhupendra, ed. Yayoi Kusama: A Retrospective. New York: Center for International Contemporary Arts, 1990. Tatehata, Akira. Yayoi Kusama. With an interview of the artist by Tatehata and contributions by Laura Hoptman and Udo Kultermann. London: Phaidon, 2000. Zelevansky, Lynn; Laura Hoptman; Alexandra Munroe; and Akira Tatehata. Love Forever: Yayoi Kusama, 1958–¬1968. Los Angeles: Los Angeles County Museum of Art, 1998.