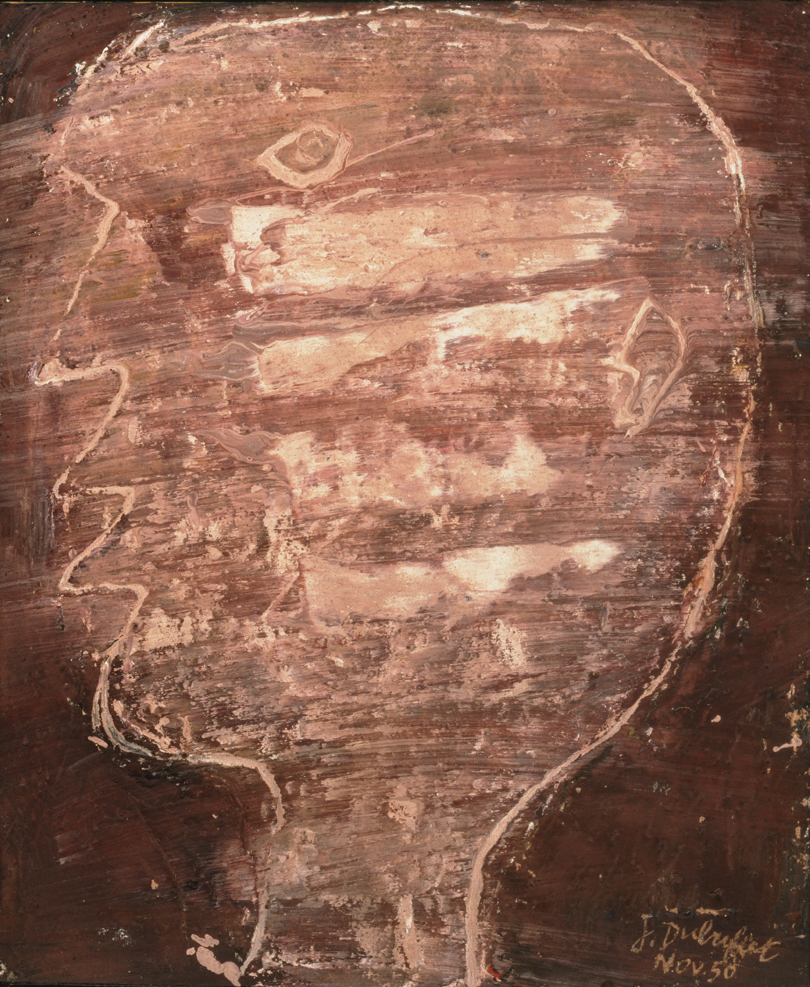 Oil and plaster on fiberboard

Working in post-WWII France, Dubuffet embraced the human figure in a rough, expressive manner. His gestural style of painting and use of materials like plaster resulted in paintings with encrusted, inscribed surfaces. This texture, in combination with the artist’s color palette in this work, evokes both earth and flesh. Dubuffet’s childlike drawing style and harsh lines reflect his interest in children’s art and Art Brut (the art of psychiatric patients or naïve art).

Jean Dubuffet Tête aux quatre râclages (Head with Four Scrapings), l950 Collection of the Akron Art Museum The postwar era in Europe and America witnessed heated debates about the viability of abstraction for a world in conflict. Abstraction dominated in the United States, but many in Europe adopted a humanism marked by the expressive presence of the human figure. The issue was memorably stated by Nathan Rapoport, the creator of the 1947 Warsaw Monument commemorating Jewish resistance to Nazism: "Could I have made a stone with a hole in it and said, 'Voilà the heroism of the Jews’?”1 In this charged atmosphere Jean Dubuffet, a prosperous forty-one-year-old wine-merchant-turned-artist, began to exhibit his art. His purposefully crude, figural paintings received notoriety in the press while being championed by a wide circle of intellectuals and artists. Dubuffet's l947 exhibition of over seventy portraits was greeted by dozens of articles in the French press, in part due to the role many of his sitters had played in the postwar controversy over resistance and collaboration.2 One critic noted the irony of needing guards in an exhibition featuring portraits of writers dedicated to notions of freedom. The identity of the sitters aside, the human face bore witness to the validity of figural works in an era of abstraction. Tête aux quatre raclages was painted several years after this show but at a time when Dubuffet was still producing portraits of controversial authors. By l950 his figures were more generalized and interchangeable, as in Tête. Critics, however, condemned Dubuffet's rough use of materials and crude, childlike drawing, which conjured up the graffiti adorning the walls of Paris. His encrusted, inscribed, earth-colored surfaces and compositions lacking in perspectival space, as in Tête, scorned Western notions of beauty. Furthermore, Dubuffet linked children's and naive art as forms of proletarian art, which is accessible to all. In his quest for an alternative artistic vision, Dubuffet became a proponent of what is now sometimes referred to as "outsider art" (a number of examples of such works are in the Akron Art Museum's collection).3 Also at this time he was amassing and exhibiting his large collection of Art Brut (raw art), a combination of schizophrenic and naive art. Rather than treating the works he collected in psychiatric hospitals as illustrative of disease, Dubuffet presented them as art and the patients as artists. Indeed, parallels between Art Brut and the harsh lines and flat spaces of Dubuffet's art are readily apparent. The artist's attitude toward materials and process are perhaps most significant inTête. In his childlike drawing style, layered impasto, and especially in the "four scrapings"—arguably the subject of the painting—the artist suggests notions of art as an encounter with materials and sets forth his belief that the finished work should retain the marks of that encounter. In this regard Dubuffet's painting recalls the importance of the existential act popularized in the writings of Jean-Paul Sartre in the postwar era. While the painting is about the artist's struggle with materials, it is also a strong testimony to the humanism of postwar European art in its subject, the expressive figure, and in its style, the expressive surface. - Mona Hadler, 2001 1. Nathan Rapoport, interview with James E. Young, February 22, l986; cited in James E. Young, The Texture of Memory: Holocaust Memorials and Meaning (New Haven, Conn.: Yale University Press, l993), 168. 2. Susan J. Cooke, "Jean Dubuffet's Caricature Portraits," in Dubuffet, 20–33. 3. The outsider artists represented in the collection are American and thus not the artists whose work inspired Dubuffet. Nonetheless, the American outsiders share many values and biographical and stylistic traits with European outsider artists. See entries on John William (“Uncle Jack”) Dey (pp. 164–65), Minnie Evans (pp. 138–39), William Hawkins (pp. 210–11), W. D. (“Crazy Mac” or “Mad Mac”) McCaffrey (pp. 226–27), the Philadelphia Wireman (pp. 144–45), Elijah Pierce (pp. 136–37), Ernest (“Popeye”) Reed (pp. 162–63), Anthony Joseph Salvatore (pp. 228–29), Eugene Von Bruenchenhein (pp. 116–17), and Malcah Zeldis (pp. 218–19). Dubuffet, Jean. Jean Dubuffet l943–l963, Paintings, Sculptures, Assemblages: an exhibition. Washington, D.C.: Hirshhorn Museum and Sculpture Garden in association with Smithsonian Institution Press, l993. Wilson, Sarah. "Paris Post War: In Search of the Absolute." In Frances Morris, Paris Post War: Art and Existentialism 1945–55. London: Tate Gallery, 1993, 25–53.