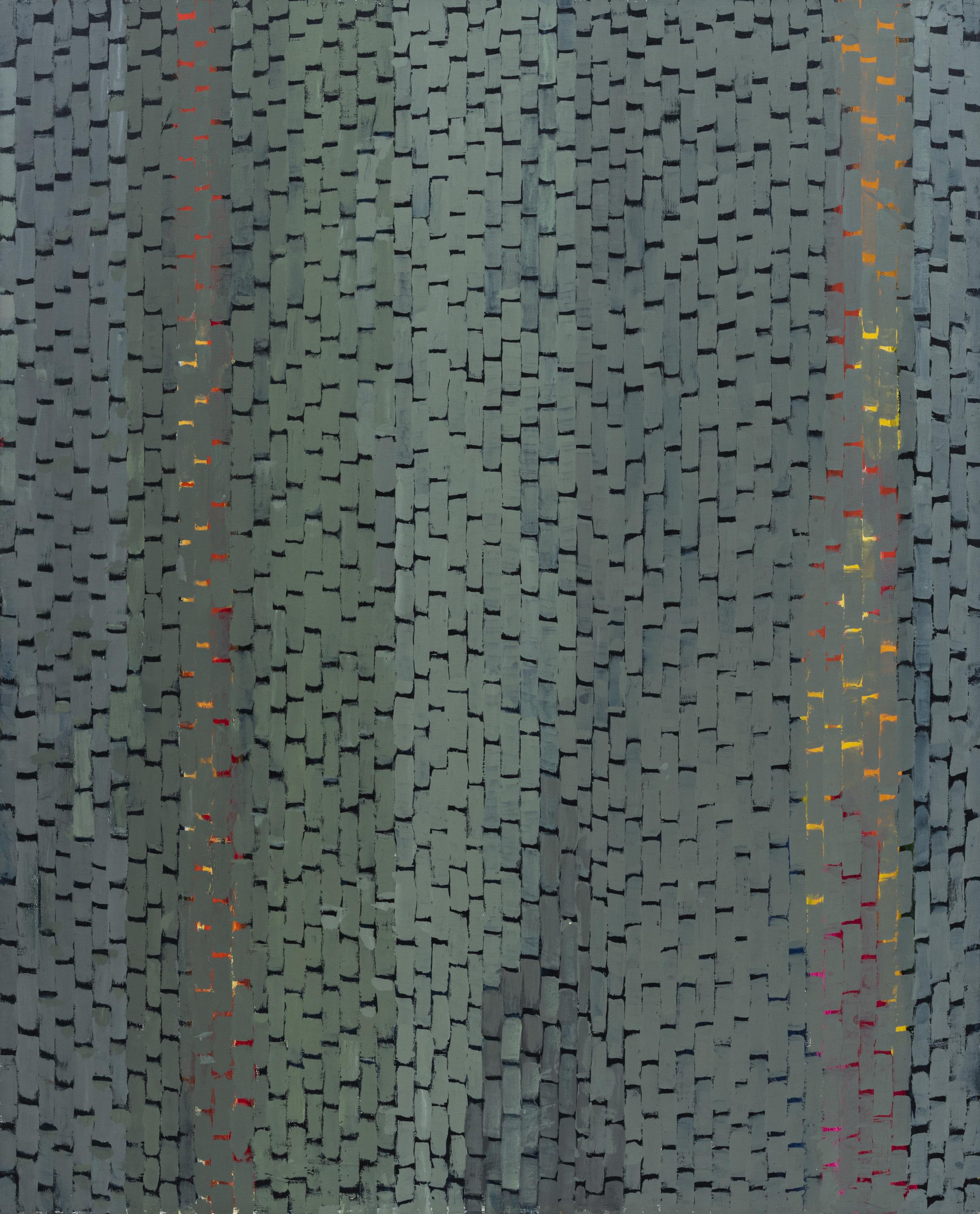 After retiring from her career as an art teacher in 1960, Thomas devoted herself fulltime to making art. Her abstractions, which focus on color and light, are frequently inspired by, and named after, experiences of viewing nature. In the early 1970s, Thomas began to limit the number of colors in her paintings, focusing on color harmonies and contrasts. Here, vivid patches of color peek out through a screen of gray brushstrokes. In 1972, the year she made this painting, Thomas was the first African American woman to have a solo exhibition at New York’s Whitney Museum of American Art.

Alma W. Thomas Pond—Spring Awakening, 1972 Collection of the Akron Art Museum A pioneer of her generation, Alma Woodsey Thomas was an African American who allowed neither age, race, nor gender to become barriers in her pursuit of a career as an artist and educator. In 1924 she was the first graduate of Howard University's art department. Thomas became a strong presence in the art scene in Washington, D.C., where she spent most of her life.1 Among her many accomplishments was the vice-presidency of the Barnett Aden Gallery, the city's first art gallery privately owned by African Americans and notable for its presentation of racially integrated shows. Thomas earned her living teaching art for thirty-five years in the Washington public schools. "People always want to cite me for my color paintings," she said, "but I would much rather be remembered for helping to lay the foundation of children's lives. I tried to develop them culturally and expand their perspectives."2 It was only after her retirement in 1960, at age sixty-nine, that she finally was able to give painting her undivided attention. Thomas garnered national recognition in 1972, when she became the first African American woman to have a solo exhibition at the Whitney Museum of American Art. In the mid-1960s, Thomas began painting impressions of natural phenomena in a highly individualized, abstract idiom. She abandoned oil for the newly developed acrylic paints, which were also the preferred medium of her contemporaries: Washington Color School painters Morris Louis (see pp. 126–27) and Gene Davis. Thomas' s dark, heavily painted abstractions of the 1950s were suddenly replaced with explosions of color formed by irregular dabs of paint organized into regularly spaced strips. In the early 1970s Thomas began to limit the number of colors within a painting in order to further explore color harmonies and contrasts. In Pond-—Spring Awakening vertical strokes of gray paint tinged with faint casts of green and blue are tightly woven to create a soft gray expanse—an unusual color selection for Thomas. Radiating from behind the gray is a mixture of reds, yellows, and oranges that seem to glow. For Thomas, color and light were the foremost elements of her paintings. She often quoted Bauhaus teacher Johannes Itten's text on color theory: "Color is life. Light is the mother of color. Light reveals to us the spirit and living soul of the world through colors."3 Indeed, because of this primacy of color and her preference for geometry and clarity of design, Thomas is often associated with the Washington Color School. However, while the concerns of Louis and Davis were primarily formal, Thomas's work stemmed from another source: nature. The titles of her paintings frequently refer to flowers in bloom, leaves on the trees, or the seasons, but usually not to specific locations or individual plants. Explaining the critical inspiration leading up to her mature paintings, Thomas credited the hollyhock tree outside her kitchen window, which produced colorful patterns and shadows that were transformed endlessly by the sunlight and wind. Washington’s renowned gardens and arboretums provided additional stimulation for her. The desire to present impressions of the beauty and ever-changing moods of nature sustained Thomas' s interest for the rest of her life. Former Akron Art Museum director Robert Doty insightfully summarized Thomas's paintings: "The possibilities of interpretation and association are so strong that her paintings maintain a strategic balance between an arrangement of abstract color shapes on a two-dimensional surface and the imagery of a common but exalting experience."4 - Sachi Yanari-Rizzo, 2001 1. Adolphus Ealey, in A Life in Art: Alma W. Thomas, 1891–1978 (Washington, D.C.: Smithsonian American Art Museum and Smithsonian Institution Press, 1981), 12, recalled Alma Thomas saying, "We artists are put on God's good earth to create. Some of us may be black, but that's not the important thing. The important thing is for us to create, to give form to what we have inside of us. We can't accept any barriers, any limitations of any kind, on what we create or how we do it." 2. Alma Thomas Papers, microfilm, Archives of American Art, Smithsonian Institution. During and after her teaching tenure, Thomas organized extracurricular art clubs for children in which she cultivated an appreciation for art—including African American art—and the rich cultural resources in Washington. 3. Quoted in Recent Paintings by Alma W. Thomas: Earth and Space Series, 1961–1971 (Nashville: Carl Van Vechten Gallery of Fine Arts, 1971), 4. 4. Robert Doty, introduction to Alma W. Thomas: Recent Paintings, 1975–1976 (New York: Martha Jackson Gallery, 1976), not paginated [7]. Foresta, Merry A. A Life in Art: Alma Thomas, 1891–1978. Washington, D.C.: National Museum of American Art and Smithsonian Institution Press, 1981. Munro, Eleanor. Originals: American Women Artists. New York: Simon and Schuster, 1979. Thomas, Alma Woodsey. Alma W. Thomas: A Retrospective of Paintings. San Francisco: Pomegranate Communications, 1998.