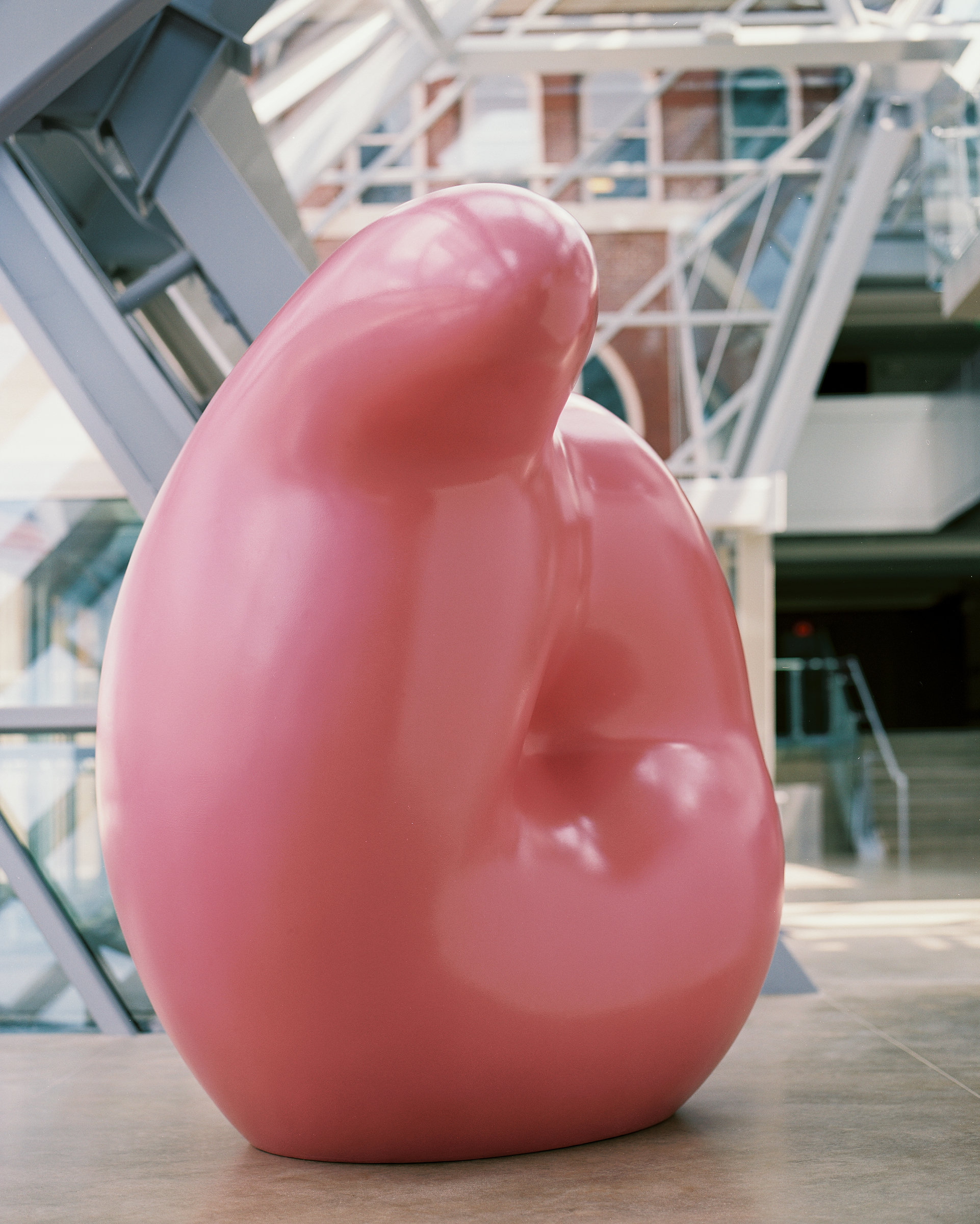 'Inverted Q' was created because in 1972 Mary and Louis Myers invited Oldenburg to propose a sculpture for a park adjoining the downtown library. A letter seemed appropriate for a library, while the Q’s tirelike shape paid homage to the then-dominant rubber industry. Oldenburg, a fan of the giant balloons in the Macy’s Thanksgiving Day Parade, hoped to cast the sculpture in rubber. Two years of collaboration with researchers and technicians at the rubber companies revealed that current technology did not permit the casting of such a massive form in rubber. In 1976, Oldenburg had Inverted Q cast in concrete in an edition of four. By this time, the library had acquired another sculpture for its garden. The Myers purchased the first work in the edition and generously donated it to the museum.

Claes Oldenburg Inverted Q, 1976 Collection of the Akron Art Museum Akron’s former role as a center for rubber manufacturing inspired Claes Oldenburg’s Inverted Q, but it is to Mary and Louis Myers that the work owes it existence. In 1972 they invited Oldenburg to Akron and asked him to propose a sculpture for a park adjoining the downtown library. A fan of Goodyear’s giant balloons in Macy’s Thanksgiving Day Parade in New York, Oldenburg was thrilled by the possibility of collaborating with the rubber companies.1 The artist was already celebrated for his Pop Art transformations of commonplace objects into a wide variety of media, from drawing and watercolor to plaster, steel, and cloth. Born in Sweden, Oldenburg was raised mostly in Chicago, where his father was a consular official. After attending Yale, he studied painting and drawing at the Art Institute of Chicago. Moving to New York in 1956, Oldenburg became involved with “happenings,” a new type of performance art. In 1959 he began to produce sculpture, the medium for which he is now best known. For the Akron project Oldenburg considered three objects: a cap; an alphabet Good Humor bar; and, his final choice, a “Q.” The letter was a perfect fit for a library setting and, with its tirelike shape, was clearly appropriate for Akron and its rubber industry. Oldenburg had first drawn an inverted “Q“ in 1968 as part of a tongue-in-cheek proposal to the City of Los Angeles for buildings and monuments in the shape of colossal letters. “An inverted position seemed necessary,” he wrote, “because a Q with its tail buried wouldn’t be a Q at all.”2 Multiple meanings and oppositions are characteristic of Oldenburg’s images. His Q inverts, enlarges, and metamorphoses what is usually a tiny, common, two-dimensional image into a huge three-dimensional object. Oldenburg wanted the sculpture to appear soft, inflated, and light, even though it would be heavy.3 He felt that Q needed to have “its own meaning apart from the context of its Akron surroundings. For example, its reference to the artist’s body.” (An early sketch is titled Navel—Akron.)4 To some viewers, Q suggests erotic areas of human anatomy or the body of an imaginary animal To arrive at Q’s final form Oldenburg spent over two years meeting with researchers and technicians at Firestone, Goodyear, and other firms; sketching; making clay and plaster models; and even casting plaster in canvas sacks sewn in the shape of a “Q.” In 1975 eighteen-inch models of the final Q were cast at Firestone in a synthetic rubber. Much to everyone’s disappointment, the costs and technical difficulties of producing a six-foot rubber version were deemed prohibitive.5 By this time another sculpture had been found for the library park, but Oldenburg was unwilling to abandon the project. In 1976 he had the large Q cast in concrete and covered with a clear, smooth coating. The Myerses bought the first work in the edition to donate to the Akron Art Institute, which organized an exhibition about its genesis.6 In 1986 after years of exposure to the elements, Q needed refinishing. At the artist’s request it was repainted the same shade of purplish pink that graces the other three works in the edition. The color evokes childhood memories of rubber balls and bubble gum and also enhances the references to the human body. Whether clear or pink, Soft Inverted Q—the sculpture based on the city’s history—has been one of the best-loved works in the museum’s collection. - Barbara Tannenbaum, 2001 1. Information on the sculpture’s genesis and Oldenburg’s involvement with the rubber industry comes from three sources: an interview with Mary and Louis Myers by Barbara Tannenbaum, Akron, September 21, 1986 (typescript); correspondence between the artist, the Myerses, and rubber company scientists and fabricators (museum files); and the most comprehensive publication on the work, a catalogue compiled by the Akron Art Institute’s director, Robert Doty (see below). 2. Claes Oldenburg, “The Letter Q,” in Oldenburg (1975), not paginated. 3. The title of this work at the Akron Art Museum was until recently Soft Inverted Q. This choice was based on correspondence and discussions between the staff and the artist during the work’s creation. In researching this book, the author discussed the title with Oldenburg. The artist feels that since the Q was ultimately produced in a hard material, inclusion of the word “soft” is not really appropriate for the finished work. 4. Claes Oldenburg, “Brief Log of the Soft Inverted Q, 1968–1976,” 10–17, in Doty, 11. Navel—Akron, 1973, is in the collection of the Akron Art Museum, a gift of the artist. 5. The Akron Art Museum owns a black version of the eighteen-inch model, which was a gift of the artist, as well as six drawings, prints, and multiples by Oldenburg. A rigid foam prototype for the six-foot tall version was produced; it was fabricated by moldmaker Bud Lamont of Plasti-Cast Mold & Products Co., Akron. 6. The six-foot tall version of Inverted Q was produced in an edition of four, all of which are now pink. These are owned by the Akron Art Museum; the Städtisches Museum Abteilberg, Mönchengladbach, Germany; the Iris & B. Gerald Cantor Center for Visual Arts at Stanford University, California; and the Samsung Corporation, Seoul, Korea. The latter work is made from cast resin. It was fabricated in 1988 at the same time as a white trial proof (collection of the Wichita Art Museum, Kansas) and an edition of two black Qs (private collection and the Yokohama Museum, Japan). Q’s original six-foot tall rigid foam prototype, which was covered with resin and painted black, is still extant, although its whereabouts are currently unknown. Doty, Robert, ed. Oldenburg/The Inverted Q. Akron: Akron Art Institute, 1977. Oldenburg, Claes. The Alphabet in L.A. Los Angeles: Margo Leavin Gallery, 1975. ———. Claes Oldenburg: An Anthology. New York: Guggenheim Museum Publications, 1995. Rose, Barbara. Claes Oldenburg. New York: Museum of Modern Art, 1970.

signed and editioned on bronze cap at top