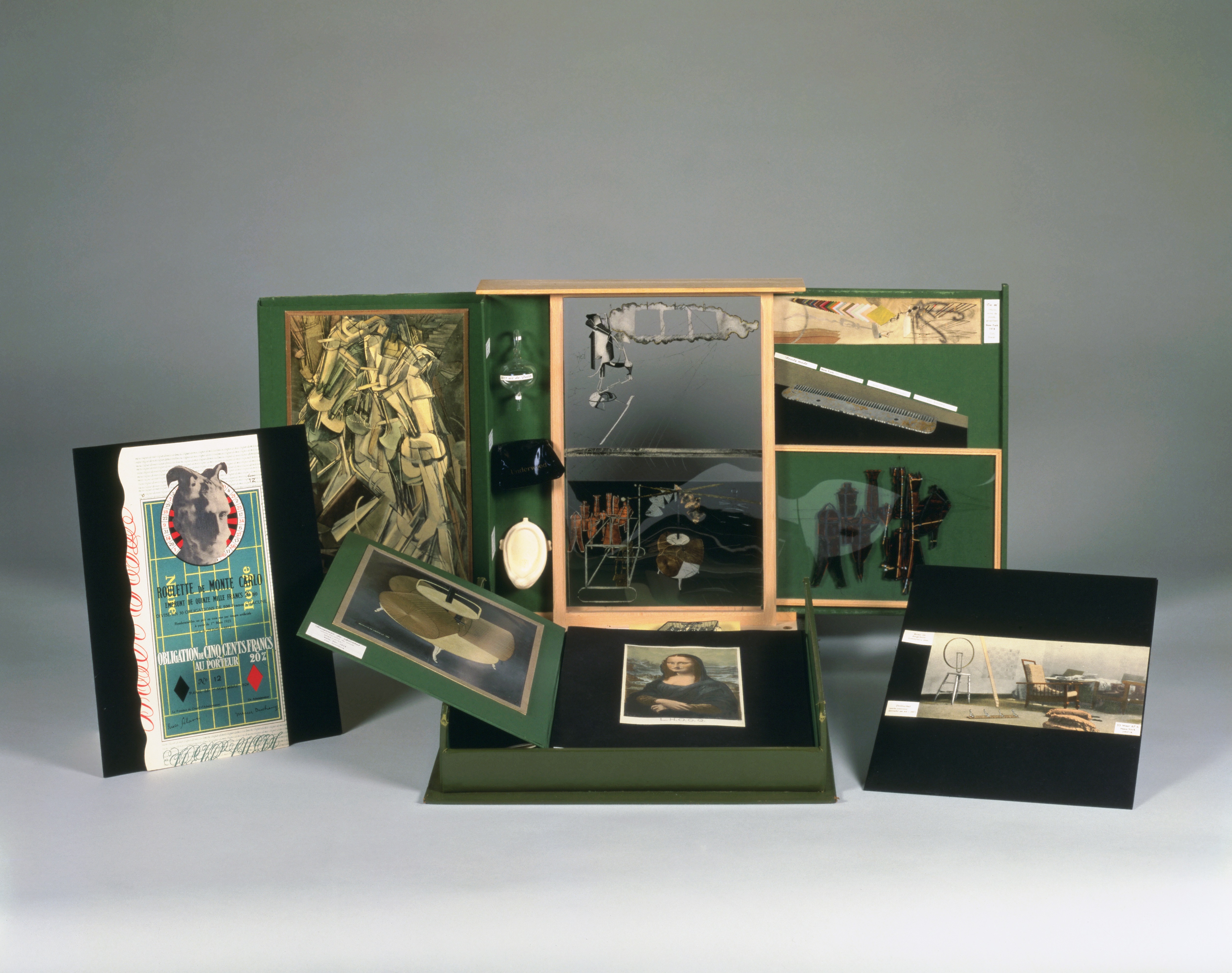 Purchased with funds from The Walter P. and Fama Keith Foundation in memory of Walter P. Keith; the Arts Council; and John Coplans

Declared "a portable museum" by Duchamp, The Box in a Valise, as this work is more commonly known, is a fascinating mini-retrospective of the artist's career. It contains approximately 80 diminuitive replicas and facsimilies of works he created over a forty-year period. Duchamp and his friends produced nearly 300 copies of this box between 1941 and 1968. The Rrose Sélavy referred to in the work's title was a fictional character—a feminine alter-ego Duchamp created in the early 1920s. Many of the works he produced thereafter were signed with Rrose's name.

Marcel Duchamp From or by Marcel Duchamp or Rrose Sélavy (The Box in a Valise), 1941 (1968 edition) Collection of the Akron Art Museum Henri-Robert-Marcel Duchamp claimed to be shy, lazy, and lacking ambition. Nonetheless, this master of irony and understatement emerged as one of modern art's pivotal figures. He did not develop a recognizable style or exhibit his work regularly, yet Duchamp's legacy has profoundly influenced subsequent generations of artists. He believed art could be made out of anything, from air and bottle racks to physics and geometry, for he was convinced that the concept behind an artwork was more important than its physical presence. His view decisively altered notions of what constitutes an aesthetic object. Duchamp produced an imposing number of the twentieth century's masterpieces. They include Nude Descending a Staircase No. 2, 1912, a Cubist-inspired painting that led the artist to abandon traditional artmaking tools; The Bride Stripped Bare by Her Bachelors, Even, 1915–23, a complex web of mechanical imagery, sexual themes, and mathematical references sandwiched between two sheets of glass; and Fountain, 1917, an ordinary urinal Duchamp inverted, signed "R. Mutt," and declared art. From or by Marcel Duchamp or Rrose Sélavy (The Box in a Valise ) contains a diminutive replica of each of these, plus facsimiles of nearly eighty other works produced by the artist between 1910 and 1954. Declared "a portable museum" by Duchamp,1 The Box in a Valise (as it is called) is a fascinating mini-retrospective that anticipates future developments in art and technology. His condensation of vast amounts of visual information into a compact form presaged ideas behind the CD ROM and the Internet, and his decision to have miniature versions of his work commercially manufactured was a radical notion. Duchamp began the initial six-year project of assembling his mass-produced reproductions around 1935. In 1940–41, as World War II raged, he smuggled these components out of occupied France and shipped them to New York, where he immigrated in 1942. The first series of twenty boxes were produced in the spring of 1941. Subsequently, between 1941 and 1968, he produced six series totalling approximately three hundred boxes. Akron's example, from the final series, contains twelve items more than the first box. It is stamped, posthumously, with Duchamp's signature and is signed by the artist's wife, Teeny. The Box in a Valise may be the quintessential Duchampian object: as serious as quantum theory and as entertaining as a child's toy. Duchamp delighted in the union of opposites and reconciliation of apparent contradictions. Nowhere was this tendency more clear than in his creation of Rrose Sélavy, the feminine alter ego mentioned in the work's title as its co-creator. This fictional character materialized in 1920, when Duchamp began to sign his work occasionally with her name. In 1921, Rrose's identity was revealed when the artist donned makeup and a woman's hat and fur and posed for two memorable photographs by Man Ray (see pp. 102–3). “Rrose Sélavy” pronounced phonetically sounds like “Eros, c’est la vie,” or "Eros, that is life," a motto combining the wit, amusing word play and themes of sexuality that informed much of the artist's work. Duchamp's fusion of autobiographical, intellectual, and sexual elements in his work effected a seismic shift in attitudes toward art that still resonates. His denigration of the purely visual—"retinal," as he phrased it—qualities of art influenced the formation of Minimal and Conceptual art in the 1960s. His creation of Rrose Sélavy foreshadowed two primary concerns of artists in the 1980s and 1990s: gender and identity. His willingness, even desire, to make his artistic legacy and personal history immediately accessible through reproductions, as in The Box in a Valise, anticipated the blurring between original and copy and the confessional approach of many contemporary artists. Ultimately, Duchamp's importance must be measured not only in terms of his artistic influence but as a harbinger of social and philosophical changes in contemporary culture. - Jeffrey Grove, 2001 1. James Johnson Sweeney, "A Conversation with Marcel Duchamp, . . . " taped interview at the Philadelphia Museum of Art. The tape was used as the sound track of a thirty-minute film made in 1955 by NBC, first shown on American television in the program Elderly Wise Men, January 1956. Bonk, Ecke. Marcel Duchamp: The Box in a Valise de ou par Marcel Duchamp ou Rrose Sélavy. Trans. David Britt. New York: Rizzoli, 1989. Hulten, Pontus. Marcel Duchamp: Work and Life. Ed. Jennifer Gough-Cooper and Jacques Caumont. Cambridge, Mass.: MIT Press, 1993. Schwarz, Arturo. The Complete Works of Marcel Duchamp. 3d ed., rev. and enl. New York: Delano Greenidge Editions, 1997. Tomkins, Calvin. Duchamp: A Biography. New York: Henry Holt, 1996.