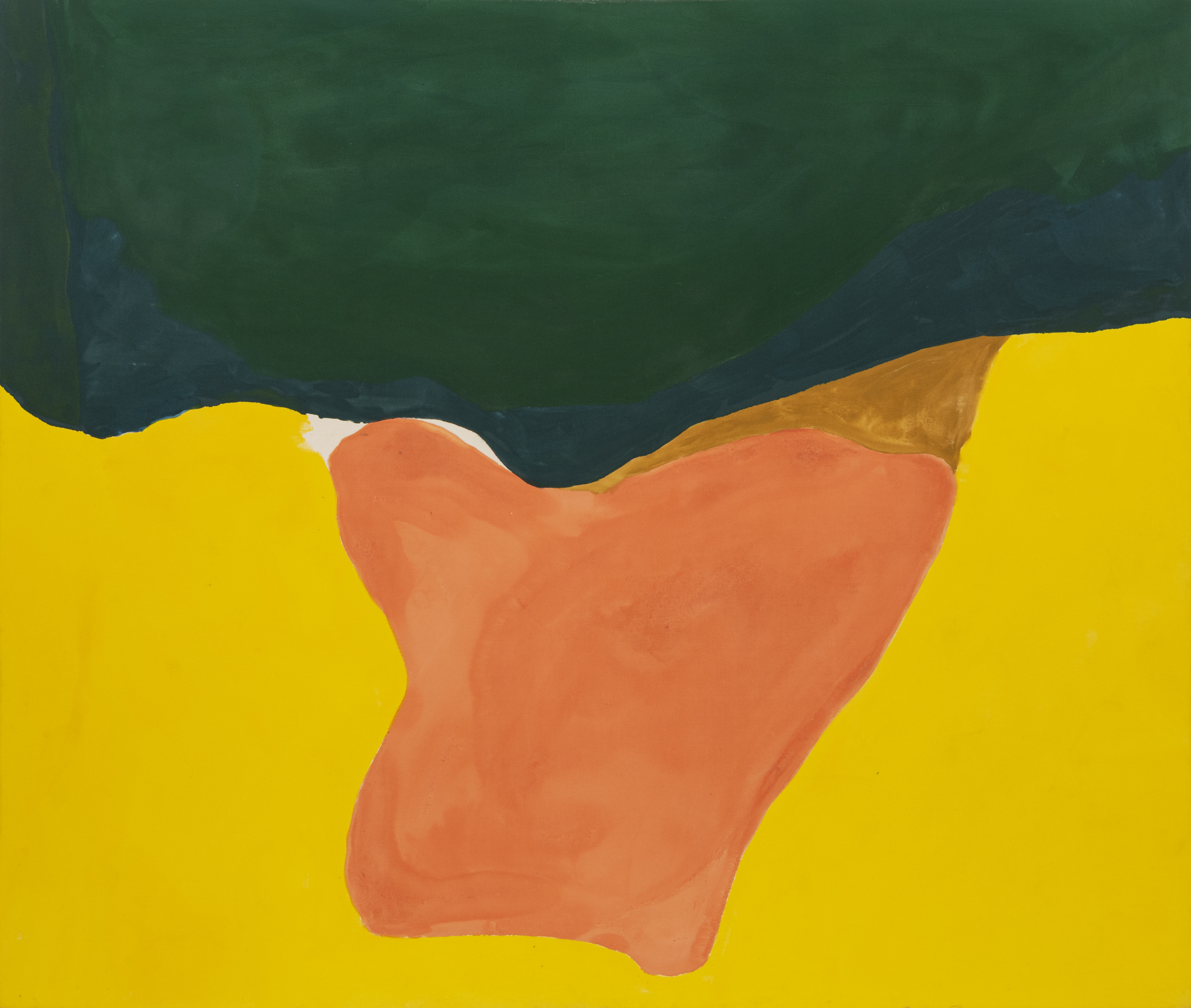 Helen Frankenthaler is considered the originator of “stain painting,” a technique of applying diluted paint onto raw canvas so the color soaks into and becomes thoroughly integrated with the surface. This imparts an unusual richness of color and reflection of light, creating the effect of watercolor painting on a large surface. Frankenthaler never made preparatory drawings; rather, by applying paint first to the central area and then working outward, she allowed forms to emerge. She worked with her canvas on the floor and manipulated the paint using squeegees and other tools. This groundbreaking method of working had a profound effect on her contemporaries, especially Morris Louis (also on view in this gallery) who adopted a similar technique after visiting her studio.

Helen Frankenthaler Wisdom, l969 Collection of the Akron Art Museum Helen Frankenthaler's paintings radiate a powerful atmospheric light. According to the artist, "It's more than light as an element. It's a metaphysical, esthetic light. Every work of art that works, on paper or canvas, happens to have that common denominator. It is a combination of the artist, the medium and the magic—elaborate magic."1 The "magic" of Frankenthaler's art has continued to be the focus of critical acclaim since her major breakthrough in the early 1950s. Her catalytic work, which grew out of Abstract Expressionism, became seminal for the Color Field artists of the 1960s, such as Washington painter Morris Louis. Frankenthaler's father was a New York Supreme Court Judge. Growing up in New York, she was nurtured in a learned and cultivated environment. In the early 1950s she formed a friendship with the prominent art critic Clement Greenberg and was catapulted into the city's heady world of Abstract Expressionism. Frankenthaler's technical breakthrough occurred in l952 in the painting Mountains and Sea. After visiting Jackson Pollock and viewing his technique of pouring and dripping paint on canvas spread on the floor, Frankenthaler laid down a large piece of unprimed cotton duck, thinned her oil paint to the consistency of watercolor, and applied it to the canvas. This "soak-stain" technique was borrowed by a number of her contemporaries, in part because of its unique sense of space. The stained image appears to be neither in front of nor illusionistically behind the picture plane but is literally one with the canvas. Her paintings appear both flat and filled with atmosphere at the same time. Frankenthaler continued to work with the canvas on the floor. Like her Abstract Expressionist predecessors, she formed the image spontaneously during the process of painting and exerted a high degree of control over the medium, making sophisticated judgments in relation to color, edge, and the cropping of the borders. In Wisdom the paint areas appear to flow naturally with curving rhythmic lines, while the central salmon-colored shape descends slowly and asymmetrically into the lower region of the canvas. Organized in three color areas, with subtle variations of primary colors, the painting is clearly controlled. The dominant shape establishes a central focus to the composition. The bold, simplified structural language of the painting relates it to new artistic currents of the times. In the early 1960s Frankenthaler switched from oil-based paints to acrylics, the paint used in Wisdom. Acrylics flood rather than stain the canvas, eliminate the turpentine halos sometimes seen with oil paints, and allow sharper lines and crisper contrasts. Like the Abstract Expressionists, Frankenthaler titles her works after they are finished, using an associative process. That she titles her art suggests that to her content continues to be significant. Often her titles evoke nature, but Wisdom suggests a mental rather than a physical landscape. This title harks back to the psychological and mental content of much Abstract Expressionist and Surrealist art before it. The accidental process, practiced to different degrees by both Frankenthaler and Pollock, has its roots in the Surrealist technique of psychic automatism. Accident, and ultimately abstraction, are in part products of the unconscious. Referring to a l964 painting she said: "It's called Interior Landscape because that's what it is—an interior landscape—an abstract picture."2 The magic of Frankenthaler's radiant canvases is that they attest to the "wisdom" of her art and the enduring meanings to be found in abstraction. - Mona Hadler, 2001 1. Helen Frankenthaler, quoted in Eleanor Munro, Originals: American Women Artists (New York: Simon and Schuster, l976), 220. 2. Helen Frankenthaler, quoted in Carmean, 42. Carmean, E. A. Jr. Helen Frankenthaler, A Paintings Retrospective. New York: Harry N. Abrams, 1989. Elderfield, John. Frankenthaler. New York: Abrams, 1989. Rose, Barbara. Frankenthaler. New York: H. N. Abrams, 1971.