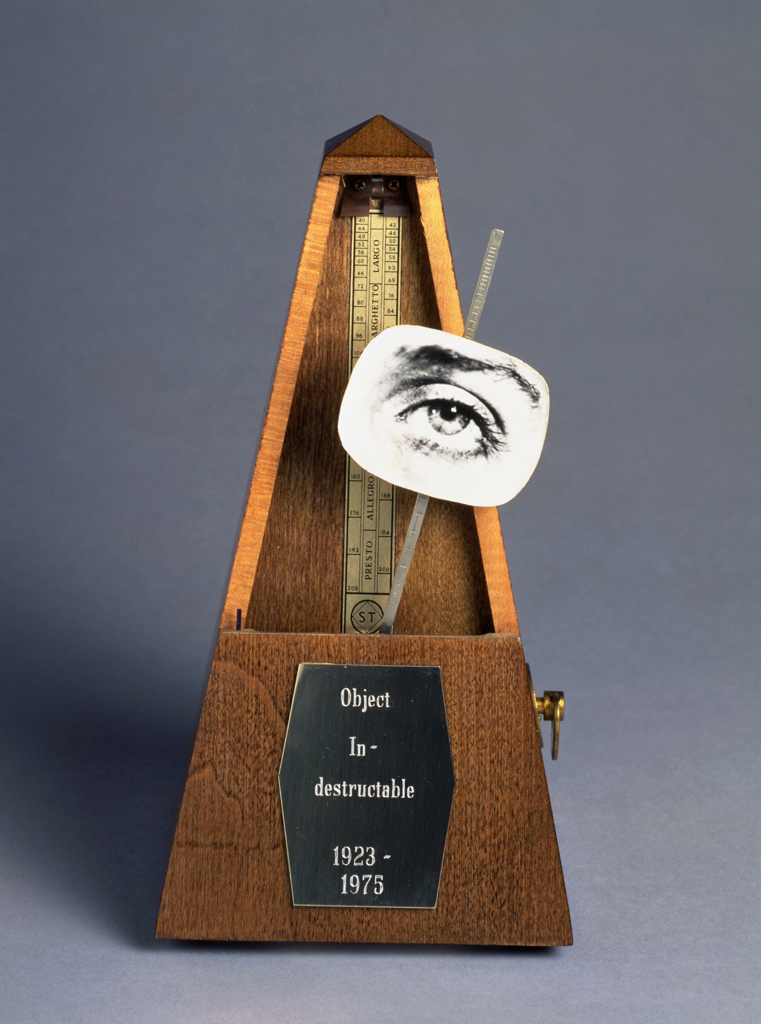 Man Ray began his art career as a "dadaist," altering simple functional objects to form blatantly useless creations. His 'Indestructible Object' was initially entitled 'Object to Be Destroyed', but after a group of angry art students accepted the title's challenge, he re-created the work with its present name.

Man Ray Indestructible Object, 1923 (1975 edition) Collection of the Akron Art Museum Man Ray, a pioneer of Dada and Surrealism, was the only American artist to play a major role in developing those influential early twentieth-century movements. He was born in Philadelphia and raised in New York, but the artist's unusual name—changed from his birth name Emmanuel Radnitzky—and the years he spent living overseas led many to assume he was European. As Marcel Duchamp's close friend and a founder of the Société Anonyme (one of the first American organizations to promote and collect avant-garde art), Man Ray was a vital link between European and American artists from the 1920s to the 1940s. Man Ray began his career as a commercial artist, then worked extensively with collage and painting before turning to photography. His contributions to abstract and fashion photography and portraiture eventually overshadowed his work in other media. Man Ray was forever irritated that he was considered primarily a photographer, an aggravation that was not unwarranted. In 1923 he produced Indestructible Object, a metronome with a photograph of an eye attached. It became one of the most recognized ready-mades in history. Ready-mades consist of everyday, mass-produced objects that attain status as a work of art through selection, slight alteration, and designation by an artist. This common Dada and Surrealist practice, popularized by Marcel Duchamp (see pp. 104–5), often involved investing an object with sexual, autobiographical, or violent significance. Indestructible Object was, in different versions, informed by all of these impulses. Originally titled Object to be Destroyed or Object of Destruction, it has also been known as Lost Object (1945), Indestructible Object (1958), and Perpetual Motif (1971). Regarding the first metronome's genesis, the artist remembered: "A painter needs an audience, so I also clipped the photo of an eye to the metronome's swinging arm to create the illusion of being watched. One day . . . the silence was unbearable and . . . I smashed it to pieces."1 His next interpretation was motivated by the ending of his love affair with Lee Miller, a former fashion model and fellow photographer. In 1932 he replaced the photograph on his metronome with one of Miller's eye. On the back of a drawing of that object, titled Object to be Destroyed, he inscribed: "Cut out the eye from the photograph of one who has been loved but is seen no more. Attach the eye to the pendulum of a metronome and regulate the weight to suit the tempo desired. Keep going to the limit of endurance. With a hammer well-aimed, try to destroy the whole at a single blow."2 The inner rage that propelled Man Ray to imbue this object with intense personal meaning evoked an especially strong audience reaction in 1957 at the Exposition Dada in Paris. There, students demonstrating against Dada and Surrealism attacked and destroyed the sculpture. The artist, in true Dadaist fashion, refused to prosecute the vandals. The insurance company covered the damage despite its suspicion that he might use the money to buy a whole stock of metronomes. The artist recalled: "That was my intention . . . . however, I assured [them] . . . I'd change the title."3 Consequently, in 1958 Man Ray made another version of Indestructible Object. He authorized its production in a limited edition, and the work soon became an icon of modern art. Further editions were issued in the 1960s and 1970s. Akron's metronome, from the final version authorized by the artist, is the classic example. Bearing a photograph of Lee Miller's eye and again titled Indestructible Object, it represents the ultimate, surreal synthesis of Man Ray's artistic and emotional history. - Jeffrey Grove, 2001 1. Schwarz, 205–6. 2. Penrose, 109. 3. Man Ray, Self-Portrait (London: Andre Deutsch, 1963), 392. Baldwin, Neil. Man Ray: American Artist. New York: Clarkson N. Potter, 1988. Foresta, Merry, et al. Perpetual Motif: The Art of Man Ray. Washington, D.C.: National Museum of American Art, Smithsonian Institution, 1988. Penrose, Roland. Man Ray. Boston: New York Graphic Society, 1975. Schwarz, Arturo. Man Ray: The Rigour of Imagination. New York: Rizzoli, 1977.