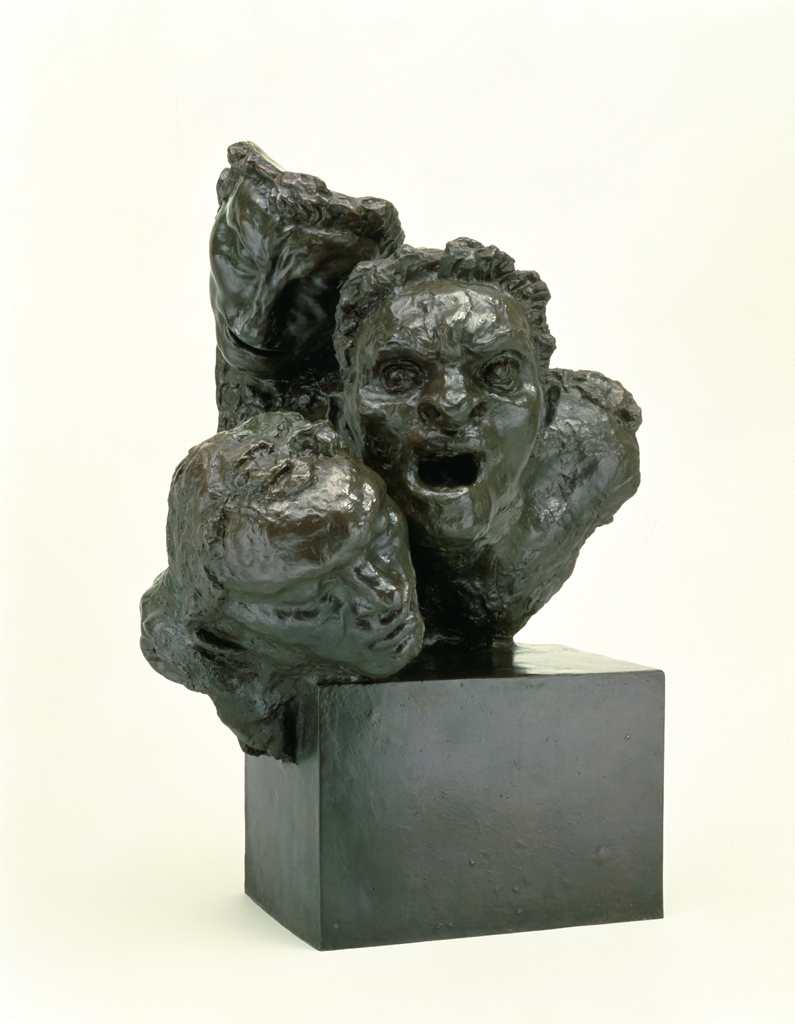 In 1893, Bourdelle’s home town of Montauban asked him to design a monument honoring the defenders of France during the Franco-Prussian War of 1870-1871. 'Figures hurlantes' is a study for the heads of the full-length figures on that sculpture, which was a radical departure from traditional war memorials. Instead of a general on horseback or wounded soldiers, Bourdelle portrayed personifications of rage, despair and brutality. He completed 'Figures hurlantes' in 1899, the same year that the older building occupied by our museum was completed.

Emile-Antoine Bourdelle Figures hurlantes (Howling Figures) (Study for Monument to the Defenders of 1870–71, of 1902), 1894–99 Collection of the Akron Art Museum Exuding passion and violence, Figures hurlantes (Howling Figures) is Emile-Antoine Bourdelle's tragic, romantic, and ultimately heroic remembrance of the losses suffered in the Franco-Prussian War of 1870–71. Captured in richly burnished bronze, Bourdelle's contorted figures convey an emotional tenor exceptional in turn-of-the-twentieth-century French commemorative sculpture. Figures hurlantes (Howling Figures) repeats three heads modeled by Bourdelle for the full-length figures that appear in his Monument to the Defenders of 1870–71. That bronze and granite colossus intended for the town square in Montauban, the artist's birthplace, was a radical update on traditional equestrian war monuments. The banal forms of those representations—somber trumpeters, women with flags, wounded soldiers—were reinterpreted by Bourdelle as passionate, if vaguely abstract, personifications of rage, despair, and brutality. Born into a working-class family, Bourdelle, at age fifteen, won a scholarship to the Ecole des Beaux-Arts in Toulouse, a region whose expressive early medieval art and architecture inspired him. He soon moved on, however, to the Ecole des Beaux-Arts in Paris, but he found the school's academic focus too rigid and left the following year. A working artist in his own right, Bourdelle simultaneously served as Auguste Rodin's studio assistant from 1893–1908. In 1893, Bourdelle was invited to propose a design for the Monument to the Defenders of 1870–71.1 Although his model was approved in 1894, the commission was not confirmed until 1897, and the monument was not completed until 1902. Altogether, the work consumed nine years of his life. Figures hurlantes, first displayed as an independent sculpture in 1899, was cast in an edition of ten; Akron's example was acquired from the artist's widow. It is signed with the artist's symbol, numbered on the base and inscribed "Süsse Fondeur, Paris" (the foundry where it was cast). Bronze, which even in its cast state maintains something of the violent viscosity it possesses in molten form, was the perfect vehicle for realizing these noble and agonized characters. Bourdelle did not attempt to convey likeness or capture individual personality in these visages: instead he strove to indicate mood and temperament. The heads, tightly compressed and set at odd angles to one another, express different emotions. One defiant warrior faces the viewer, nostrils flared, mouth and eyes wide open, while the other two avert their gaze, resigned to fate. These dramatic distortions recall the explosive rhythms and heated passion of the sibyls in Michelangelo's murals for the Sistine Chapel. At the time this monument was created, a rapid transition from realism to abstraction was underway in France. Artists like Bourdelle who looked to classical precedents came to be viewed as conservative or even hopelessly retrograde. Figures hurlantes may have been daring for its time, but by the early twentieth century Bourdelle was considered among the league of sculptors "who accepted conventional symbols of heroism in styles which modernists felt were sterile falsifications of experience and consciousness."2 Nonetheless, Bourdelle's Montauban monument provoked a public outcry. The dynamic tension expressed in the rough-hewn figures aroused heated, contradictory emotions not normally elicited by traditional, commemorative monuments. Bourdelle preferred that his work be installed in public, natural settings. It seems particularly fitting that Figures hurlantes presently resides in the museum's Myers Sculpture Courtyard, an oasis of calm in the heart of a bustling downtown. - Jeffrey Grove, 2001 1. It was customary, in nineteenth-century France, for provincial communities to offer monument commissions to local or locally born artists. 2. Albert E. Elsen, Modern European Sculpture 1918–1945: Unknown Beings and Other Realities (New York: George Braziller, in association with the Albright-Knox Art Gallery, Buffalo, 1979), 122. Adams, Philip Rhys. Antoine Bourdelle. New York: Charles E. Slatkin Galleries, 1961. Cannon-Brookes, Peter. Emile Antoine Bourdelle: An Illustrated Commentary. London: Trefoil Books and National Museum of Wales, 1983. Jianou, Ionel, and Michel Dufet. Bourdelle. Paris: Arted, Edition d'Art, 1965.