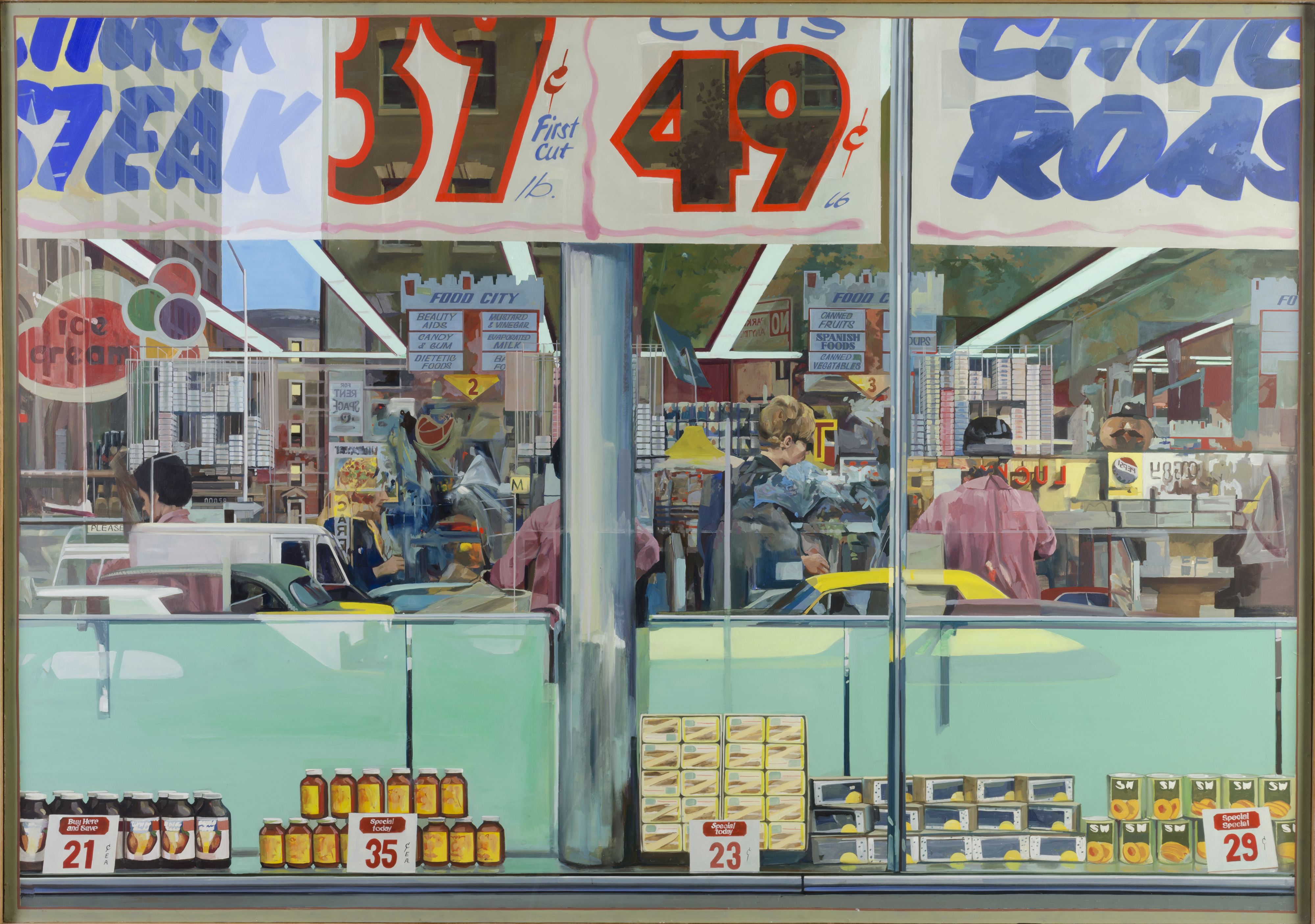 Oil, acrylic and graphite on fiberboard

Purchased, by exchange, with funds raised by the Masked Ball 1955-1963

Richard Estes is a leader among the 1960-70s group of painters referred to as Photorealists because their images are based on photographs, not reality itself. An outgrowth of Pop art, Photorealism shared Pop's focus on consumer goods and popular media. The overabundance of objects seen here—vehicles in the street reflected in the window, rows of food products and garish price banners—reflect both the tedium and energy of urban and retail spaces. From a distance, Estes' painting looks remarkably true-to-life, but on closer inspection, one discovers how artificially constructed the image really is. As the artist described, Food City combines realism and abstraction. He built up different layers of pigment to convey the depth of space and reflective surfaces one sees when looking through a shop window.

Richard Estes Food City, 1967 Collection of the Akron Art Museum Applying modern technology to the traditional realist practice of making studies on site, Richard Estes uses photographs as his source instead of charcoal, ink, or pencil sketches. He first used photographic aids upon leaving art school, having lost easy access to models. By the early 1970s, after working as a commercial artist in Chicago and New York, he had become highly successful—a key figure in Photorealism, a new wave of realist painting derived from photography. Critics interpreted Photorealism as an outgrowth of Pop Art, sharing its interests in consumerism and media. Photorealism acknowledged that information today rarely comes from personal involvement but instead is manufactured or preselected by others, especially through photographic reproductions. Unlike other Photorealists, however, Estes was less interested in commenting on photography than in using it as a tool. "It's silly to work from drawings when I can do better with photographs," he explained with characteristic frankness.1 "We see things photographically. We accept the photograph as real," he asserted.2 His arguments oppose much contemporary theory addressing questions of artificiality in photography. Among Estes's most frequent subjects are the streets and shopfronts of Manhattan's Upper West Side, near his apartment. Food City, from the beginning of his career, displays aspects of traditional realist painting in its visible brushwork. It also points to the artist's later mature style, particularly in the layered reflections and the insistent verticals and horizontals that forcefully divide the painting. Food City originated in photographs Estes took with a 35mm camera and developed himself to achieve better details. To create his composition he intuitively selected parts of each photograph for his preliminary drawing on the surface of the fiberboard. The result, as the artist has pointed out, is a combination of realism and abstraction, because multiple, disconnected forms are "floating around on a flat surface."3 The painting appears to have begun with markings in pencil over which Estes laid a light layer of diluted acrylic paint, like in a wash drawing. Oils were then applied on top of the acrylic, a slower process that likely involved further alterations. Usually Estes then applies a transparent, slightly tinted layer of paint (known as a glaze) to enrich depth and color and to unite the different elements painted on the surface. While Estes’s images are thoroughly contemporary, his technique harks back to painting in the tradition of Jan Vermeer and other great realists from centuries past. He has given us a visual record of New York in much the same way that Vermeer recorded intimate portraits of Delft. And like Vermeer, Estes draws attention to the difference between the way the eye sees and the way a lens "sees." Working from multiple photos Estes can have many areas of the image "in focus," while the eye can focus on only one place at a time. Ironically, Estes abandons the humanistic concern at the core of Dutch realism. "I don't want any kind of emotion to intrude."4 The artist's aloofness is especially evident in the anonymous figures visible through the window. The uniformed, pink image of the cashier is repeated three times, as though a person is as easily reproducible as any of the store's packaged goods. Food City is not beautiful; even the arrangement of items and prices in the display window is banal. But the scene is visually enticing and offers a rich array of images to examine: vehicles in the street, consumer staples, price tags, and a sense of both the tedium and energy in city life. - Mitchell D. Kahan, 2001 1. Quoted in Louis K. Meisel, Photo-Realism (New York: Harry N. Abrams, 1980), 209. 2. Interview with the artist, in Arthur, 79. 3. Quoted in Meisel, 25. 4. Interview with the artist, in Arthur, 26. Arthur, John. Richard Estes: The Urban Landscape. Boston: Museum of Fine Arts and New York Graphic Society, 1978. Meisel, Louis K. Richard Estes: The Complete Paintings 1966–1985. New York: Harry N. Abrams, 1986.