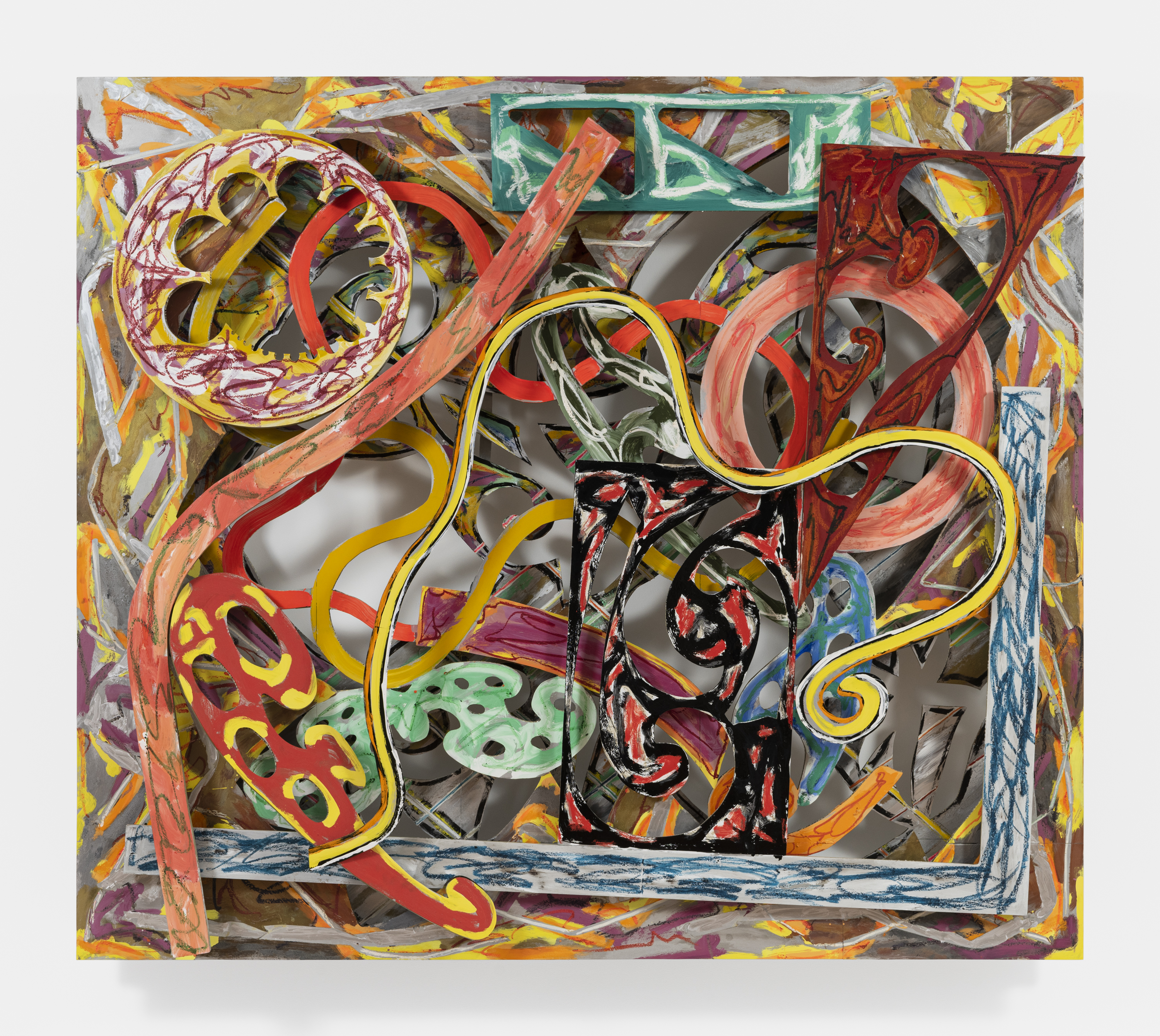 Purchased, by exchange, with funds from the John Lyon Collyer Fund and the Charles E. and Mabel M. Ritchie Memorial Foundation

This work is part of a large series of paintings and prints that Frank Stella named after international circuits for auto races—Diepholz is a German track. While the painting’s frenetic energy may parallel the drama of race-car driving, it is not a depiction of a particular place or event. Its snaking curves derive instead from art tools—ornate drafting templates such as French curves and ship curves used in nautical design. A structure of lightweight but strong honeycomb aluminum allowed Stella to build the painting so that it projects off the wall into the gallery, challenging traditional distinctions between painting and sculpture.

Frank Stella Diepholz, 1981 Collection of the Akron Art Museum Frank Stella, one of the most widely exhibited artists of the late twentieth century, is as perplexing as he is exciting. He refuses to confine paintings to flat surfaces, endowing metal reliefs with an exuberant materialism and overwhelming grandeur. Stella was raised in suburban Boston and first studied art at Phillips Academy in Andover. At Princeton University he took classes with teachers and students who were to become leaders in the art world of the 1960s. Only one year after his 1958 college graduation, Stella was included in the influential Sixteen Americans exhibition at the Museum of Modern Art in New York. Numerous awards and exhibitions have followed. The most prestigious honor was an invitation to deliver The Charles Eliot Norton Lectures at Harvard University in 1983, in which he offered highly creative insights on paintings by old masters as well as contemporary artists. Diepholz is from a series titled Circuits, a group of ninety-five painted metal reliefs and dozens of prints which the artist completed from 1980 to 1984. What Stella described as “the longest and most concentrated streak of work that I’ve ever had” may reflect his intense personal interest in auto racing.1 The individual pieces in the series bear the names of international circuits, or venues, for auto races. Diepholz, named for a course in Germany, is constructed of two layers of honeycomb aluminum to which additional aluminum segments are attached. Begun with drawings and foamcore models, Diepholz was ultimately custom-machined by a laser cutter and fabricated in fifteen separate pieces at Swan Engraving Company in Bridgeport, Connecticut. It was then painted in Stella’s Greenwich Village studio, where the artist works with several assistants. With its French curves, flexicurves, and other drafting forms, as well as shapes left over from cuts for other works, Diepholz conforms to Stella’s longtime insistence on using preexisting shapes that avoid personal meanings. Stella has insisted that “what you see is what you see,” that his art is purely visual without reference to anything else. For a time, such a stance was fairly widely accepted by those who rejected both Abstract Expressionism’s philosophical ambitions and Pop Art’s embrace of everyday life. But it is increasingly difficult to accept Stella’s credo that art is only a visual tour de force. Without meaning, there can be no art, only design or decoration. Although Stella’s works are decorative, which accounts for their ubiquitous presence in corporate lobbies, the artist’s exploration of a painted surface and how it can dynamically erupt into three dimensions is more than an academic exercise. It is art—and its meaning derives from the works' bureaucratic fabrication utilizing assistants and advanced technology, from their overpowering physical presence, and from the way the works are used by collectors. These attributes proclaim the masculine energy of the artist himself and declare art’s ability to confer power, status, and vitality upon those who collect it. If Diepholz offers visual thrills more than content, this triumph of style over substance is not unique to Stella. Rather, the artist and his work serve as a brilliant mirror of our times. - Mitchell D. Kahan, 2001 1. Quoted in William Rubin, Frank Stella: 1970–1987 (New York: Museum of Modern Art, 1987), 156. Stella was commissioned by BMW to paint a racing car. He survived a serious crash en route to Le Mans in 1980. Guberman, Sidney. Frank Stella: An Illustrated Biography. New York: Rizzoli International, 1995. Rubin, William. Frank Stella: 1970-1987. New York: Museum of Modern Art, 1987. Stella, Frank. Working Space. The Charles Eliot Norton Lectures; 1983–84. Cambridge, Mass.: Harvard University Press, 1986.