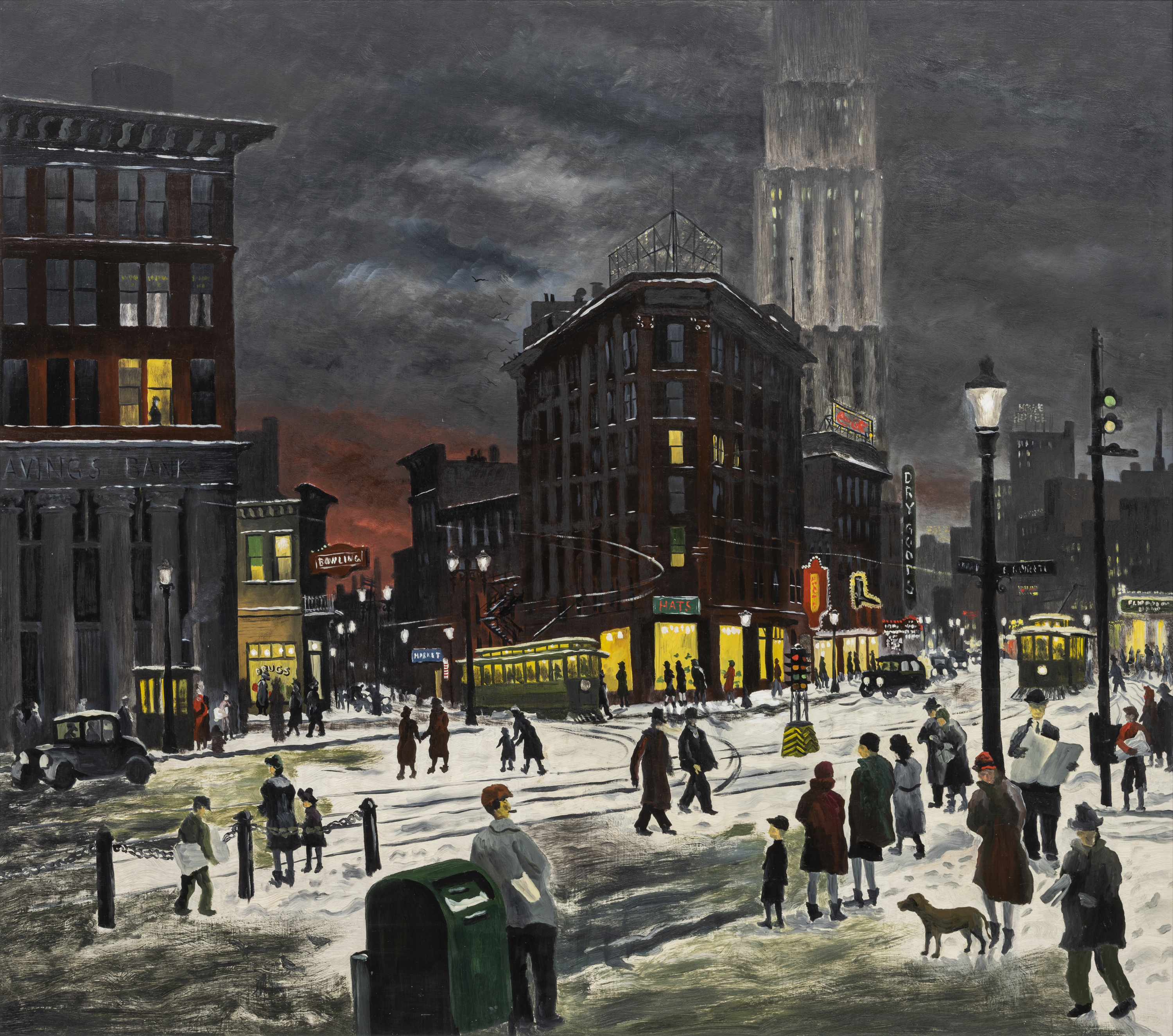 Once known as 'Big Town', this painting documents Akron’s bustling Main Street in the 1930s. Akron and the rest of the nation was suffering an economic depression, but Gleitsmann created a cheery scene by painting animated figures, chugging street cars and patches of bright yellow light radiating from building interiors. Although he received informal art instruction from his friend Paul Travis, Gleitsmann was essentially self-taught.

Raphael Gleitsmann Winter Evening, around 1932 Collection of the Akron Art Museum This scene of a downtown Akron intersection, bustling with activity on a snowy winter’s evening, captures the feel of the city’s Main Street in the 1930s. Now seen as a glimpse into a vanished past, Winter Evening represents an ambitious young artist's effort to show the city he knew best. Raphael Gleitsmann moved to Akron with his family at age six.1 His father, Louis, an architectural engineer and amateur painter, inspired Raphael to pursue art as a career. After graduating from high school, Gleitsmann studied art with Katherine Calvin, an Akron painter, and Paul Travis, an instructor at the Cleveland School of Art.2 Gleitsmann remained essentially self-taught, however, exploring new ideas and materials on his own. Although he favored oil painting, he also worked in watercolor, photography, and other media. Gleitsmann developed his style by looking to those artists he most admired. His strongest early influences were Edward Hopper, famed for his stark scenes from American life, and American Scene painters such as Thomas Hart Benton and Grant Wood, who depicted realistic images rooted in midwestern rural life. Winter Evening also appears to have been influenced by the loose brushwork of an earlier generation of urban scene painters, such as John Sloan and George Bellows. These sources are apparent in many of Gleitsmann's paintings from the early to mid-1930s depicting slightly stylized rolling landscapes, factories, and cityscapes characteristic of Akron and eastern Ohio. Gleitsmann's decision to paint what he knew best was not an effort to reject a larger world. Rather, it was the choice of a young man who had seen little beyond his home state. Winter Evening typifies such works. A mostly straightforward cityscape, it is rendered clearly but without sharp detail. 3 The artist's youth and inexperience show in the rough handling of the figures and structures, but the painting's ambitious scope, sophisticated composition, and overall cohesion transcend its limitations. Working with a palette emphasizing blues and grays, Gleitsmann ably handled the challenge posed by the muted colors of a nighttime scene. He also gave Akron an active, cosmopolitan feeling: the play of indoor and outdoor lights and the almost palpable movement of cars, trams, and people lend the scene a feeling of energy and excitement. Yet such telltale signs as the single tall building —Akron’s first skyscraper, built in 1929–30—and the modest crowds serve as reminders of Akron’s true character, that of a small city. By the late 1930s Gleitsmann's art took on a sleeker, more sophisticated look as he embraced new influences, integrating elements ranging from the hard edges of modernism to surrealist imagery. In 1943 his career was interrupted by World War II and active service in Western Europe. An injury in March 1945 ended his military service, but the violence and devastation of the war continued to haunt him. After returning to Akron, Gleitsmann struggled to put his new feelings and thoughts into visual form. He started painting images of Europe in his prewar style but gradually shifted to expressionistic depictions of imaginary ruins inspired by destroyed buildings he had seen during the war. He achieved significant professional successes with his postwar art, the most notable being first prize at the Carnegie Museum Invitational in 1948, in which he competed against an array of nationally and internationally noted artists. Sadly, however, Abstract Expressionism and other new movements had gained momentum, and as a result Gleitsmann's more traditional work fell out of favor. He virtually stopped producing art after 1954. The Akron Art Museum owns six oil paintings and seventy-nine watercolors, drawings, and photographs by Gleitsmann. - Wendy Kendall-Hess, 2001 1. Gleitsmann's family had dropped the second "n" in their surname to "Americanize" it, but he chose to put the letter back. 2. The school is now known as the Cleveland Institute of Art. Travis, knowing that Gleitsmann could not afford tuition there, invited him to sit in on his lectures at no cost. 3. Gleitsmann took two major liberties with the downtown streetscape, probably for formal reasons: he made both the skyscraper and the twelve-story building on the southwest corner of Main and Bowery appear shorter than they really were. Kendall-Hess, Wendy. Early Works by Raphael Gleitsmann. Akron: Akron Art Museum, 1990. Shinn, Dorothy. “A Wintery View in ’32: How a Rising Young Artist Saw Akron.” Beacon Magazine, Akron Beacon Journal, June 20, 1982, 2–3, 14.