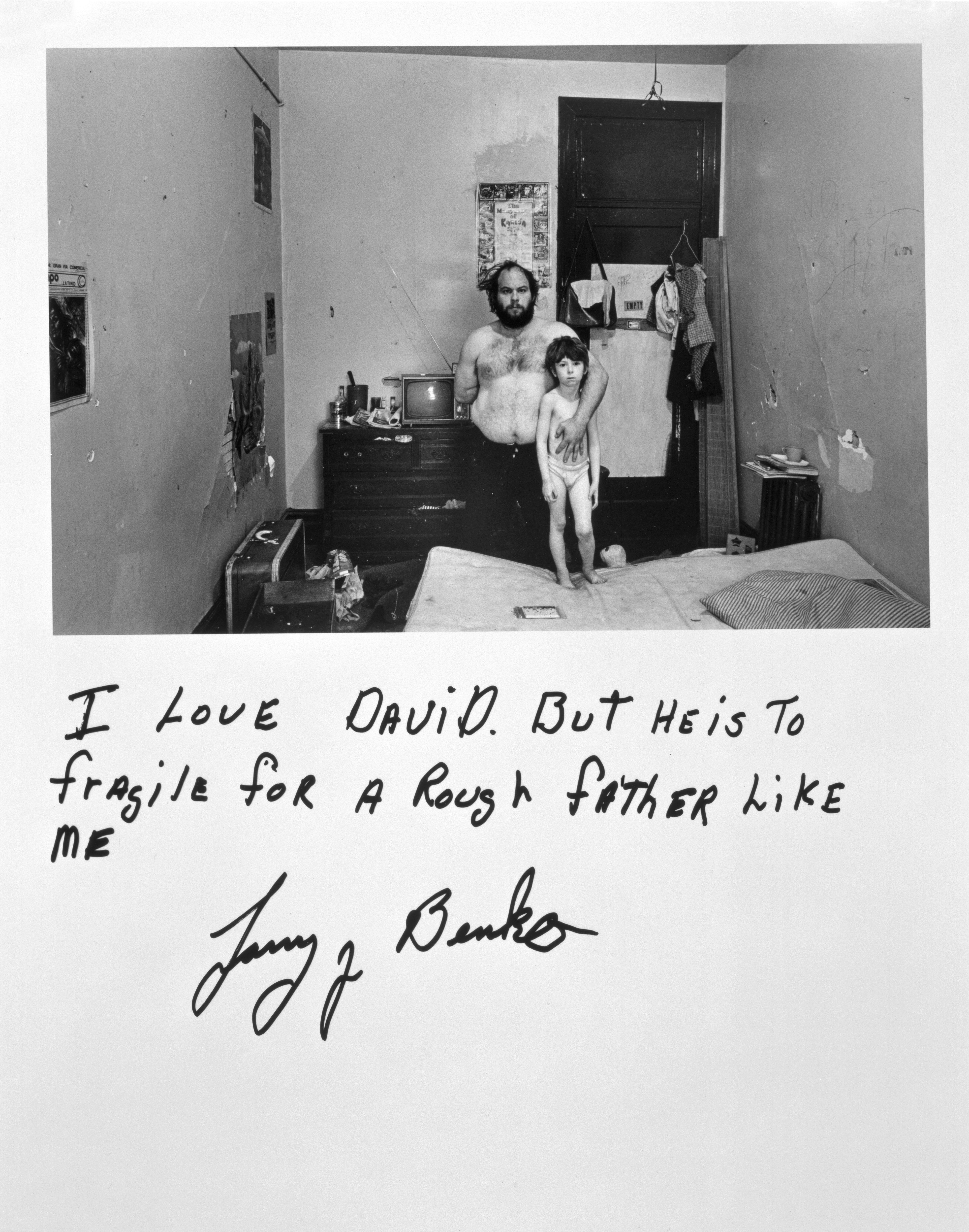 Untitled from the Rich and Poor Series

Jim Goldberg began photographing residents of San Francisco's transient hotels in 1977. He asked his subjects to hand-write their own commentary, and then made prints that combined the images with the handwriting. After a year of shooting in the hotels, Goldberg decided to also photograph the wealthy in their homes using the same interactive process. The series, completed in 1985, yielded some unexpected results, and gives us a view of hope and desperation at both ends of the social spectrum. Rich and Poor attempts to explore the effect of environment and circumstance on the individual. Are the poor, or the rich, really different from you and me? Do we get what we "deserve" in life or is it all a game of chance?

Jim Goldberg Untitled from the Rich and Poor series, 1979 (printed 1985) Collection of the Akron Art Museum "My son, David, always seems to take an amused, philosophical approach to life," wrote Linda Benko on one of three photographs of her family in Jim Goldberg's Rich and Poor series. "He is the kind of son that every mother wishes she had." "But,” writes Larry Benko below a picture of himself with David, “he is to [sic ] fragile for a rough father like me." Reading the words under the photograph of father and son, it is impossible not to think about what has become of this vulnerable child. One of ten photographs by Jim Goldberg in the museum's collection, the image shows the two males standing in the center of the family's home—a single claustrophobic room in a transient hotel. Larry Benko presses his son against him with one arm; the other is bent behind his back, as if he needs to hide it to restrain his actions. Against the bulk of his father's body, David's long, thin limbs look as easy to snap as twigs. When Goldberg began photographing residents of San Francisco's transient hotels in 1977, he hoped to "create . . . a better understanding of a life we either refuse to see or are ignorant of. And I believed that having my subjects write on the photographs would bring . . . a deeper truth.”1 He returned with the portraits and asked their subjects to comment on them. After editing their words Goldberg went back to ask them to write out his selections in their handwriting. As a final step he made photographic prints that combined the images with the handwriting. It is the union of image and words that makes us wonder if David's philosophical approach survived life with his father and a childhood spent in rooms with "dark, slanted floors, smelling of piss, alcohol and cheap food, bare light bulbs."2 Or did he end up like Larry, aware of his flaws but convinced of his inability to change? The Rich and Poor series attempts to explore the effect of environment and circumstance on an individual. Are the poor, or the rich, really different from you and me? Do we get what we "deserve" in life or is it all a game of chance? After a year of shooting in the hotels Goldberg began to find that "my sense of their powerlessness and of my own helplessness to offer them a way out created a pain that was difficult to accept."3 As an antidote, he decided to also photograph the wealthy in their homes using the same interactive process. Since he was pursuing an M.F.A. in photography at the San Francisco Art Institute, he chose his rich people largely from the school's board of trustees. Self-doubt, irony, and an awareness of privilege prevail in their comments; in general, the wealthy seem far more self-conscious and reticent to address major issues than do the poor. By the time Goldberg completed the Rich and Poor series in 1985, it had already begun to renew critical debate about the effectiveness of social documentary photography in our cynical, me-first, image-saturated age. The photograph of David and Larry makes us sad, but does it make us act to help the Benkos and others escape poverty? Will having an understanding of the problems of the rich help solve them? To be fair we must also ask: is there not value in learning about the lives of our fellow humans, rich and poor? - Barbara Tannenbaum, 2001 1. "Afterword," Goldberg (1985), not paginated. 2. Ibid. 3. Ibid. Goldberg, Jim. Rich and Poor. New York: Random House, 1985. ———. Raised by Wolves. In collaboration with Philip Brookman. New York: Scalo, 1995.