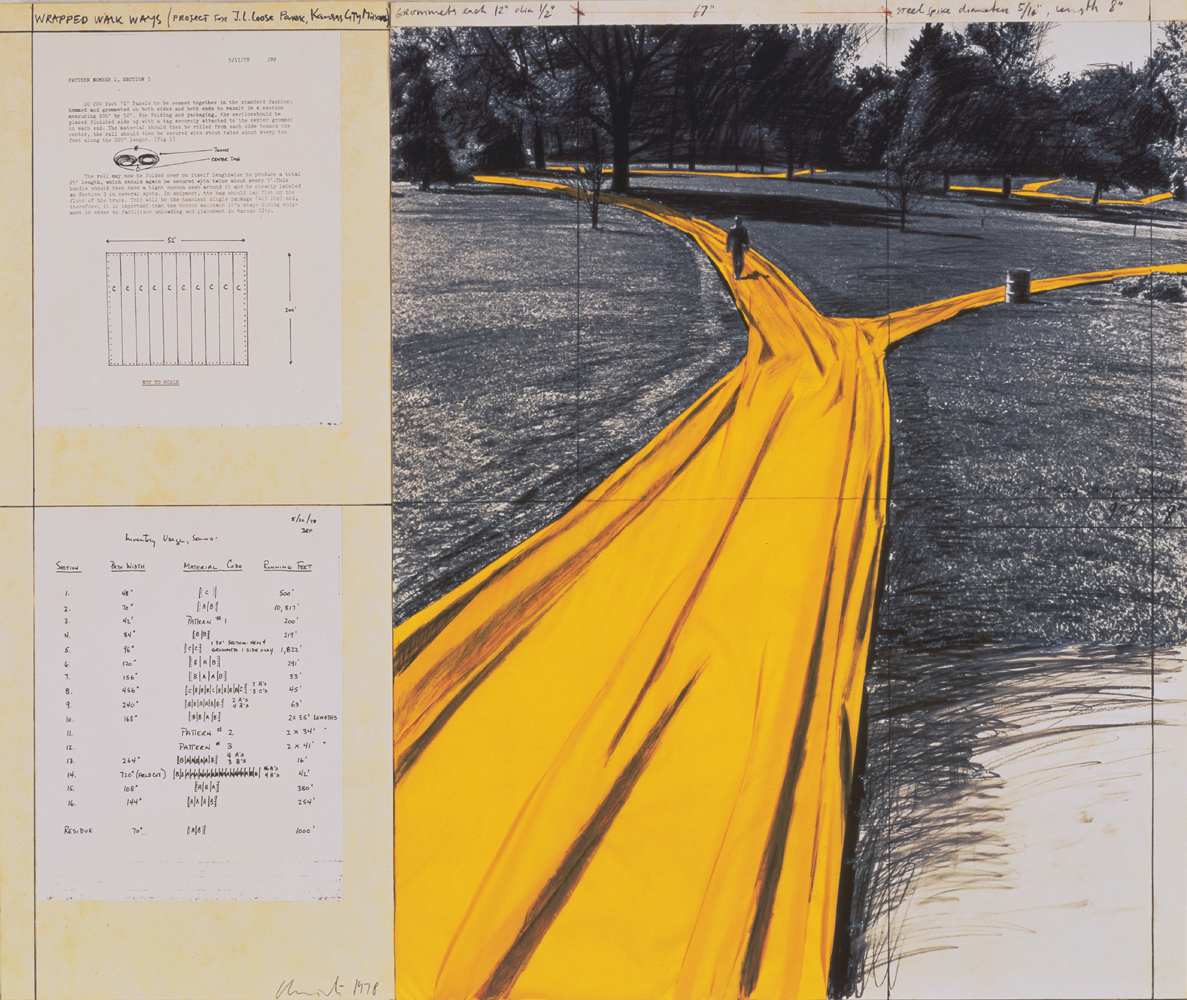 Gift of Harold and Alice Gilbert

Christo alters our experiences of the built and natural environments by temporarily wrapping, veiling or covering them. This work shows preparatory plans for a 1978 project in a Kansas City park. 135,000 square feet of saffron-colored nylon fabric were used to cover 2.7 miles of the park’s walkways and jogging paths. The fabric, which was installed in two days by 84 people, including construction workers and seamstresses, remained in place for approximately two weeks. The material was then removed and recycled, and the park was restored to its original condition.

Christo Wrapped Walk Ways (Project for J. L. Loose Park, Kansas City, Missouri), 1978 Collection of the Akron Art Museum Initially, Christo's two-paneled drawing of Wrapped Walk Ways provided a glimpse at a sculpture yet to be built. The left panel contains specifications for cloth to cover the park's walkways for two weeks in October 1978. The right panel, a collaged drawing with a sample of the cloth used in the park, shows how the artist envisioned the finished work. Almost twenty years later, this drawing and many others, along with photographs and a film, serve as documentation of a work that no longer exists. Christo (who dropped his surname, Javacheff, decades ago) has adapted planned obsolescence to public art. Best known for his 1995 wrapping of Berlin's Reichstag, he transforms a building or site by temporarily wrapping, veiling, or covering it. At the end of a specified time, all traces of the project are removed. The alterations may be ephemeral, but they leave a lasting impact on the viewer. Christo explains, If I live across the street from Loose Park, . . . and jog on its paths every morning for three years, after a while I cease to pay attention. . . . Half awake, panting and sweating, I look but I do not see. Suddenly, on the second of October, 1978, teams of young workers . . . are covering the paths with a loosely draped, luminous saffron cloth. By the fourth all the paths, pavilions and walkways have been transformed into rivers of gold, rippling slightly in the breeze. I notice the curve of a path against the green lawn, the formal rigidity of the garden area with its strict horizontals and verticals. For two weeks I'm awake while running, curious, aware . . . and then it is gone. The change is almost as radical as the initial transformation. I carry the memory of the Wrapped Walk Ways and a deeper appreciation of Loose Park with me every morning as I continue my circuits around the park.1 Christo's monumental outdoor projects can be accomplished only through teamwork involving not just the artist's wife and collaborator, Jeanne-Claude, but also industrial fabricators, engineers, politicians, and a large crew of installers—in Kansas City, eighty-four people. The artist's drawings are more solitary undertakings and demonstrate his exquisite draftsmanship. Christo received a traditional academic education in painting, drawing, and stage design at the Fine Arts Academy in Sofia before leaving Eastern Europe for the West at age twenty-one. Perhaps his theatrical background taught him how to seductively evoke, with simple means, the look and mood of a future creation. In this drawing of Wrapped Walk Ways, Christo puts us on one of the park's paths, with the cloth streaming out from beneath our feet. Ahead, in the distance, we glimpse flashes of the brilliant gold cloth winding through grass and trees. It is crucial that Christo's drawings for projects such as Wrapped Walk Ways be inspiring and alluring as well as informative. Not only are they the means to convey a project's overall look and to convince officials to grant permits for it, they are also the major source of revenue for each project. The artist accepts no subsidies, fees, or grants for his projects, instead supporting their entire cost through the sale of drawings such as this. Since 1968 Christo has used the art market to finance his large-scale sculptures. By purchasing this drawing from the artist, Harold and Alice Gilbert helped pay for a work that neither they nor anyone else will ever own, a work that exists in memory and imagination—sparked by photographs or by drawings such as Wrapped Walk Ways. - Barbara Tannenbaum, 2001 1. Quoted in Barbara Tannenbaum, “Politics, Economics and Personality as Media: The Art of the Christos,” National Arts Guide 2 (January–February 1980): 7. Christo: Wrapped Walk Ways, Loose Park, Kansas City, Missouri, 1977–78. Essay by Ellen R. Goheen, photographs by Wolfgang Volz. New York: Harry N. Abrams, 1978. Laporte, Dominique G. Christo. New York: Pantheon Books, 1986. Vaizey, Marina. Christo. New York: Rizzoli, 1990.