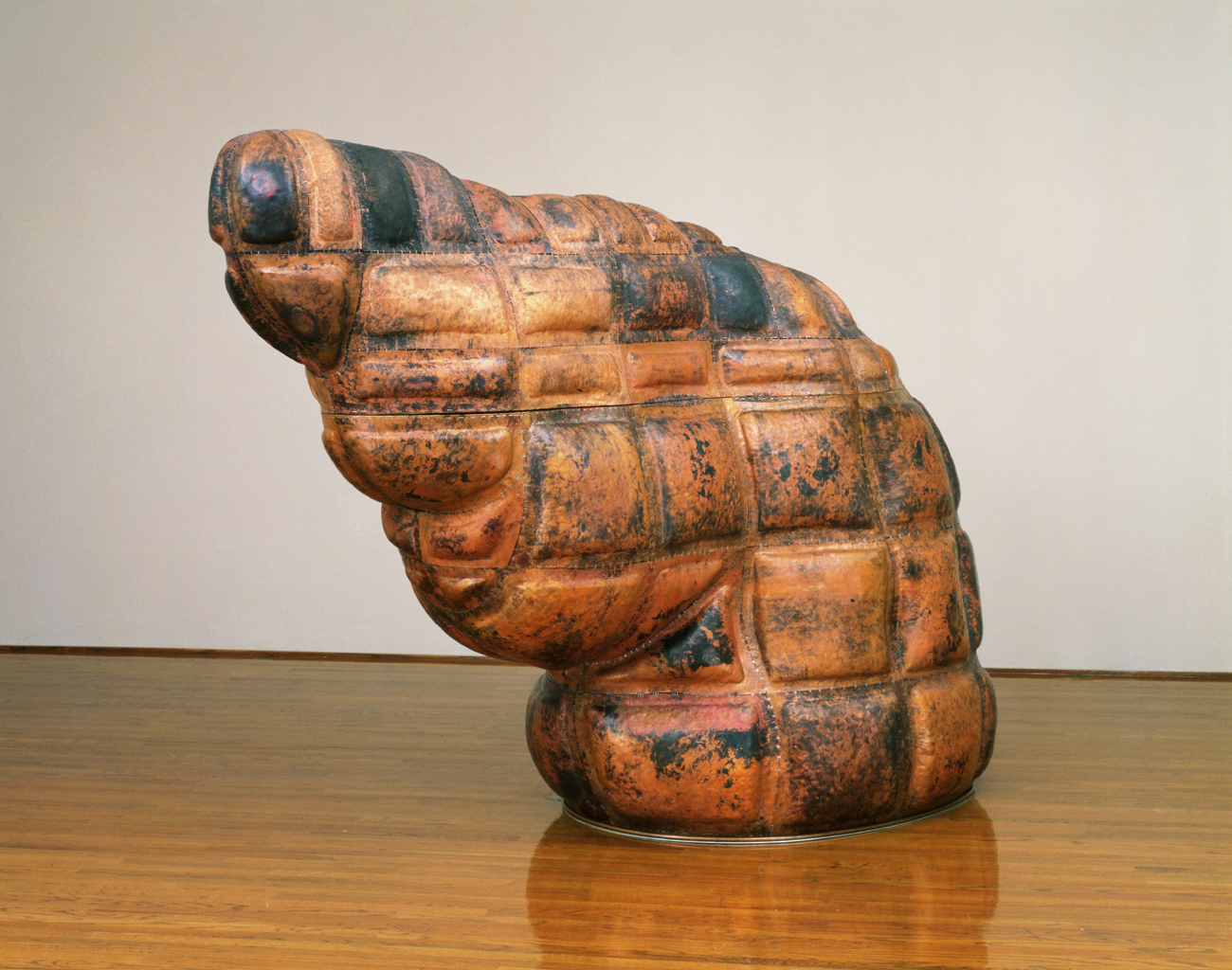 Though Deacon rarely works from sketches, the overall contour of Cover is based on a drawing he made of Laurasia, one of the hypothetical primordial land masses from which our current five continents divided. The bumpy, grid-like skin of Cover brings to mind natural organisms and geological surfaces as well as manufactured objects. Deacon’s ambiguity suggests an unwillingness to believe that there is one “right” meaning, a trait central to much of the art of the 1980s and 1990s.

Richard Deacon Cover, 1990 Collection of the Akron Art Museum Richard Deacon's labor-intensive methods of fabrication focus attention on the innate physical properties of materials, such as the sensual burnished copper of Cover. His sculptures are all unfamiliar abstract forms, without links to any prior experience. Nevertheless rich psychological associations emanate from the shapes and materials. Deacon was raised in Sri Lanka and England; his mother was a surgeon and his father a pilot. The artist began art studies in 1968; he received a B.A. from St. Martin's School of Art and an M.A. from the Royal College of Art. He has taught in London and exhibited throughout the United States and Western Europe. In 1987 Deacon received the Turner Prize, awarded to a British artist for exceptional achievement. "I am a fabricator, not a carver or a modeller," says the artist.1 Like Donald Judd (see pp. 150–51), Deacon uses industrial and construction materials, not media such as clay and bronze that are traditionally associated with art. But unlike Judd and other American Minimalists, whose techniques embrace industrial technology, Deacon works in his studio using hand tools. He proceeds intuitively, each piece taking shape at full-scale without preplanning or small preparatory models. The result is an energetic fluidity and an awareness of the sculptor's touch. For Deacon, no choice is made solely for aesthetic reasons, but each bears the added weight of metaphorical possibility. In Cover, the hammered copper sheets recall armor or sheathing or aged leather. The oxidized surface suggests a natural geological process. Though Deacon rarely works from sketches, the overall contour of Cover is based on a drawing he made of Laurasia, one of the hypothetical primordial land masses from which our current five continents divided.2 That tie to the earth is also seen in the sculpture's gridded divisions, which recall Deacon’s interest in mapping, specifically the markings for latitude and longitude. Implicit inferences about the value of hand labor pervade Deacon's sculpture. The joy of craftsmanship, however, is mitigated by certain factors. Cover seems overbuilt, almost armored. The use of multiple staples to attach the copper sheets to the fiberglass understructure finds a parallel in other works by Deacon that have excessive numbers of screws, brackets, and rivets. This extreme craftsmanship borders on a disquieting obsessiveness. Deacon’s titles are carefully chosen. Art may be visual, but language makes us think about art. “Cover” is a noun and a verb at the same time, suggesting a thing and an activity.3 The word implies that something is hidden. "To cover" is also a term from horsebreeding that means to inseminate. Indeed, viewed from its projecting end, male sexual organs emerge, while from the heavier end, a mountainous, crooked spine summons images of a landscape or beast. Describing several earlier pieces, Deacon made an observation that also applies to Cover: "In all the work the organic, the inorganic, and the human, are somehow combined."4 Appropriately, Cover is somewhat larger than a human figure but smaller than a monument; it is neither anthropomorphic nor architectural but an unsettling presence standing on the floor rather than a pedestal. The sculpture inevitably elicits the question, "What is it?" only to summon uncertain and contradictory responses. Cover is sensual yet threatening, beautiful and ugly, evoking both attraction and repulsion. In a catalogue essay on his wife's ceramic work, Deacon wrote that "a confusion between flatness and depth, invitation and rebuttal, characterizes our dealing with the world."5 His view of life characterizes his own art. Physical attributes are inextricably linked to charged psychological responses. - Mitchell D. Kahan, 2001 1. Richard Deacon, in gallery handout for the exhibition Making Sculpture, Tate Gallery, London, 1983. 2. Michael Newman, "From World to Earth: Richard Deacon and the End of Nature,” in Interpreting Contemporary Art, ed. Stephen Bann and William Allen (New York: IconEditions, 1991), 198. 3. Ibid., 199. 4. Richard Deacon: Talking About “For Those Who Have Ears, No. 2" and Other Works (London: Patrons of New Art/Friends of the Tate Gallery, 1985), 11. 5. Richard Deacon, Jacqui Poncelet—New Ceramics (London: Crafts Council, 1981), quoted in Richard Deacon, ed. Clark, 49. Richard Deacon, ed. Vicky A. Clark. Pittsburgh: Carnegie Museum of Art, 1988. Thompson, Jon; Pier Luigi Tazzi; and Peter Schjeldahl. Richard Deacon. London: Phaidon, 1995.