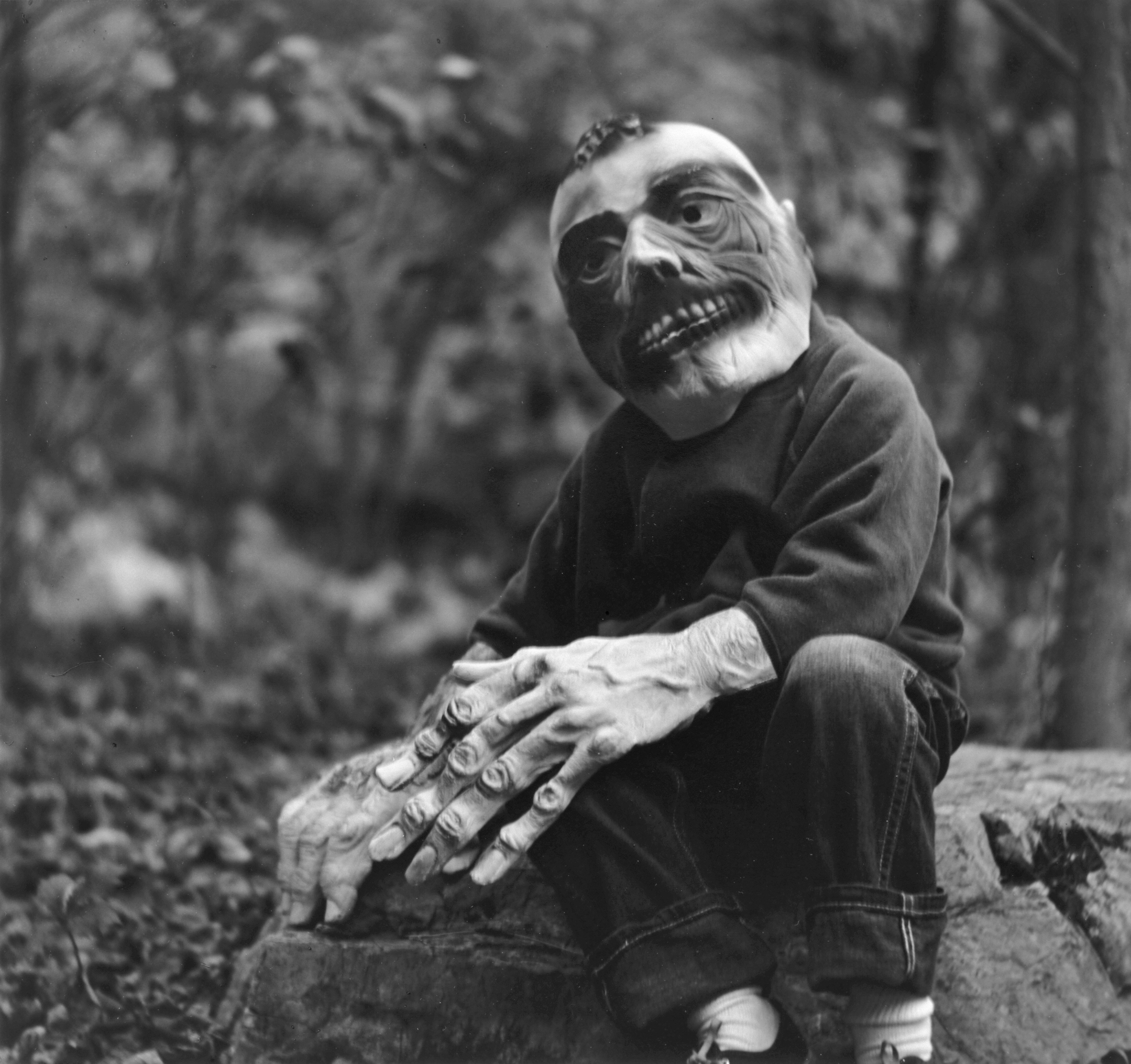 Purchased with funds from Anne Alexander and the Museum Acquisition Fund

Ralph Eugene Meatyard Untitled, 1960 Collection of the Akron Art Museum A few ounces of rubber mask add the weight of the world to the boy in Ralph Eugene Meatyard's untitled photograph about the difficult transition between childhood and adulthood. Although Meatyard made several bodies of abstract photography, it was staged, figurative scenes like this, which he produced regularly throughout his career, that brought him international acclaim. Taking family and friends to meadows, woods, and abandoned houses, Meatyard provided them with props and asked them to stand or move a certain way as he snapped their picture. The resulting images are hardly portraits or snapshots. They are fictions. Like a wizard, Meatyard transmuted the drab banality of ruined houses, rubber masks, and hooded sweatshirts into disturbing surrealist dramas that reveal truths about the human condition. An optician by trade, Meatyard was living in Lexington, Kentucky, in 1950 when he bought a camera to document his firstborn child. He quickly became serious about the medium and began studying with Van Deren Coke at the Lexington Camera Club. He also attended a three-week workshop at Indiana University taught by Henry Holmes Smith, Minor White, and Aaron Siskind (see pp. 124–25). Meatyard soon turned away from the documentary aspects of photography. He wanted not merely to photograph what he found but to transform it, either through the camera’s unique qualities of vision or through the fabrication of a scene at a found location. Masks were among his most frequently used props. Plastic or rubber, from a dime store or magic store, neither elaborate nor precious, these false faces bear idiotic grins, physical deformities, flayed skin, or exaggerated features. On a child at Halloween they might be scary or mocking. In Meatyard's photographs they assume a melancholy yet compassionate air, as in Untitled. The boy sits patiently on a rock in front of some trees or bushes, tilting his oversized pumpkin-like head in a reflective posture. His enormous hands would be folded in his lap, but they are too big, so they hang over onto the rock. His pose brings to mind the physical awkwardness of a teenage boy whose limbs have grown too quickly for the rest of his body to adjust. The wrinkled mask and gnarled hands prophesy his further aging, inevitably to be accompanied by suffering and sadness. Growing old is a morbid joke indeed. This Frankenstein made of mismatched parts—a creature tamed and sadly aware of his own grotesqueness—elicits the viewer's sympathy, not horror. Like many of Meatyard's images, it is ambiguous, combining humor and tragedy to reveal truth rather than mere fact. During his lifetime a number of Meatyard's colleagues were highly critical of his use of posed tableaux and his cultivation of multiple readings. Ironically, these same traits make his work especially relevant to current art practice, including that of Cindy Sherman (see pp. 216–17) and Carrie Mae Weems (see pp. 240¬–41). While the approach of these younger artists usually derives from social and political concerns, Meatyard's preference for fiction and his belief in the legitimacy of ambiguity stemmed from strongly personal sources: his adherence to the Asian philosophy of Zen (with its respect for paradox) and his own innate personality. The masked boy in Untitled is awful to look at but draws our curious gaze; he is at once humorous and sad, a joke and the most serious of statements. - Barbara Tannenbaum, 2001 Hall, James Baker, ed. "Ralph Eugene Meatyard." Aperture 18 (1974). The entire double issue of the journal is devoted to Meatyard and his works. Meatyard, Christopher, ed. Ralph Eugene Meatyard: In Perspective. Tavagnacco, Italy: Art & Edizioni delle Arti Grafiche Friulane, 1996. Tannenbaum, Barbara, ed. Ralph Eugene Meatyard: An American Visionary. Akron and New York: Akron Art Museum and Rizzoli International, 1991.