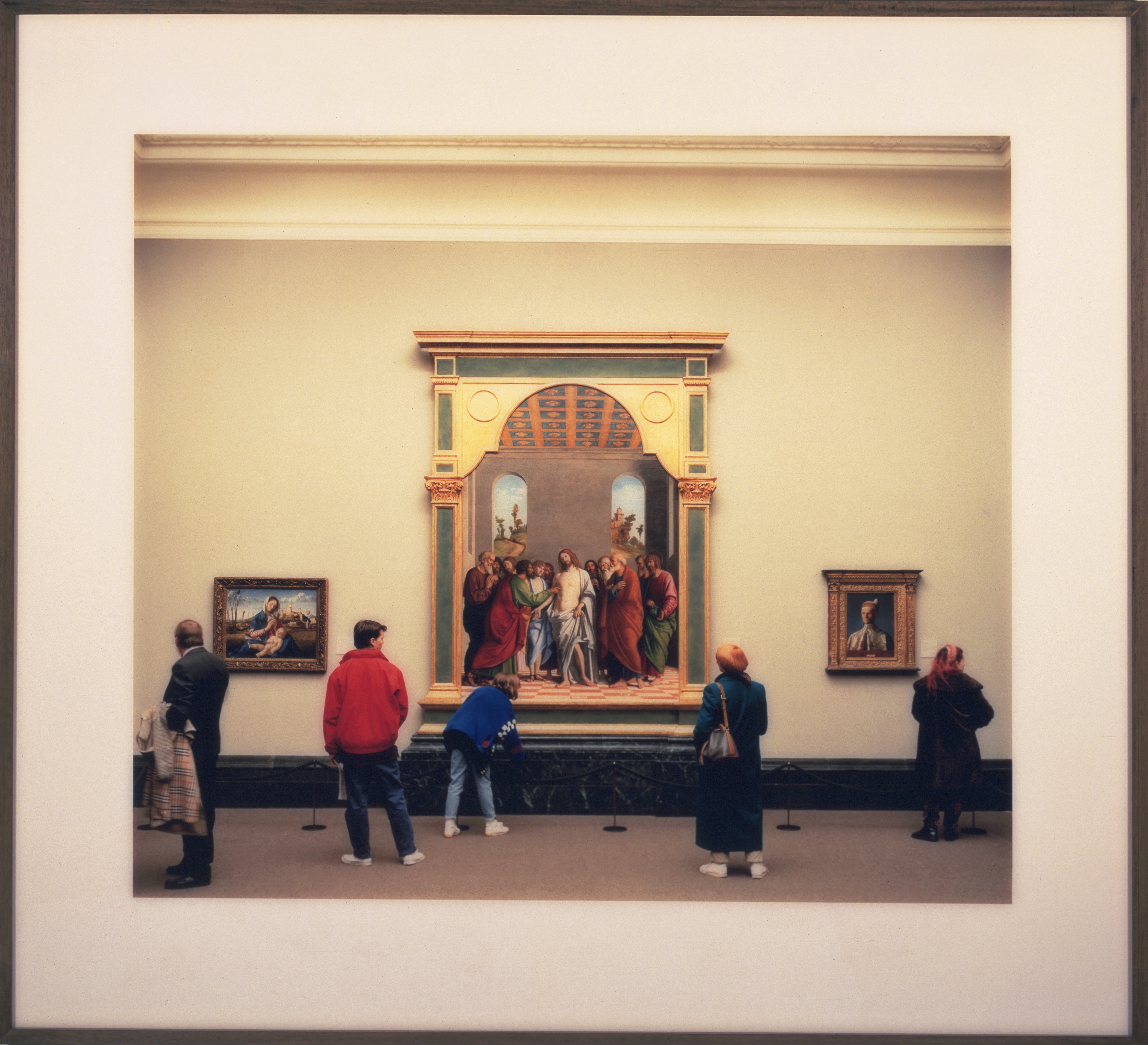 Thomas Struth and other young German photographers forged a new look and scale for photography in the 1980s, one that enabled photographs to compete for visual attention with painting and sculpture. He turned to new technologies: color printing of unprecedented size and a mounting technique that makes the image appear lush and luminous. "I felt a need to make these museum photographs,” says Struth, “because many works of art...have now become mere fetishes, like athletes or celebrities.” In National Gallery I, London Struth clicked the shutter at a moment when the spectators appear to worship the paintings and even echo some of the figures in them. Standing before Struth’s photograph, you the viewer echo its figures in venerating art.

Thomas Struth National Gallery I, London, 1989 Collection of the Akron Art Museum One of a series of images that Thomas Struth took in museums throughout North America and Europe, National Gallery I, London is rich in emotional and psychological content. Struth set up his equipment— a large-format camera mounted on a tripod—in museum galleries, then waited for people to walk in and out of the frame. When the composition suited him, Struth tripped the camera’s shutter. He did not pose museum visitors, but given the camera’s size and lack of mobility, it is hard to believe that most were unaware they were being photographed. From the start, Struth approached his work in a systematic, almost clinical fashion. In the 1970s, he studied with leading German artists noted for their intellectual approach to art—among these, photographers Bernd and Hilla Becher and painter and photographer Gerhard Richter. His first body of photographs were black-and-white images that focused on the urban landscape, particularly unpeopled streets and enormous housing complexes. (The Akron Art Museum owns two of those works as well.) His second series, in color, was a group of family portraits that comment on the intimacy and estrangement that often coexist in families. In his third body of work—the museum photographs—Struth focuses on the ways we perceive art and interact both with the artwork and with others similarly engaged. As lush and luminous as the paintings it portrays, National Gallery I, London shows five museum visitors as they scrutinize three Italian Renaissance paintings.1 Each painting, far removed from its original time, place, and purpose, is presented in a new context. The central painting, for instance, was originally part of an altar in a church, where it served as an object of religious veneration. In the museum, it may again become an object of adoration, now valued more for its aesthetic, cultural, and historical significance than its religious meaning. The works on the left and in the center represent biblical parables; the work on the right portrays a Venetian head of state. This arrangement contrasts secular and spiritual subjects with pointed effect. Discussing the museum photographs, Struth expressed his belief that distinctions separating art, religion, and entertainment have become hopelessly eroded, claiming, “Today museums [are comparable] to the sports field or to religion.”2 Other elements strengthen the idea that art, like religion, has become a form of worship. The young woman in the center appears to genuflect as she views the painting. Further, the photograph itself seems luminescent, as if it were lit mysteriously from within. This curious effect is achieved through Struth’s unusual mode of presentation. He attached the front of the photograph to a sheet of Plexiglas using a clear adhesive. Because there is no protective backing, light reflects off the wall and through the image, giving it a seductive, almost ethereal glow. The sensation is similar to viewing a slide projected on a screen—the way many of us first encounter great works of art in an art history course or lecture. The visitors shown here share the intimacy of a group activity, yet emotionally and physically each remains alienated from the others, silent and alone. Their truest involvement seems to be with the paintings. The pose of some figures and the color of their garments seem to echo those of characters in the paintings. Such details let us know that Struth captured this scene at a strategic moment. Carefully synthesizing his interests in art, architecture, physical space and the psychology of human behavior, Thomas Struth demonstrates his facility as a thoughtful investigator of the social, emotional, and intellectual forces shaping the role art plays in our lives. - JEFFREY GROVE, 2001 1. From the left these are Giovanni Bellini’s The Virgin and Child or Madonna of the Meadow, Ama de Conegliano’s (Cima’s) The Incredulity of St. Thomas, and Giovanni Bellini’s The Doge Leonardo Loredan. 2. “Interview between Benjamin H. D. Buchloh and Thomas Struth,” in Portraits: Thomas Struth (New York: Marian Goodman Gallery, 1990), 39. Belting, Hans. Thomas Struth: Museum Photographs. Munich: Schirmer/Mosel, 1993. Sennett, Richard. Thomas Struth: Strangers and Friends, Photographs 1986. Cambridge, Mass.: MIT Press, 1994. Stack, Trudy Wilner. Art Museum. Tucson: Center for Creative Photography, University of Arizona, 1995.

title signature and edition info on verso LR in pencil