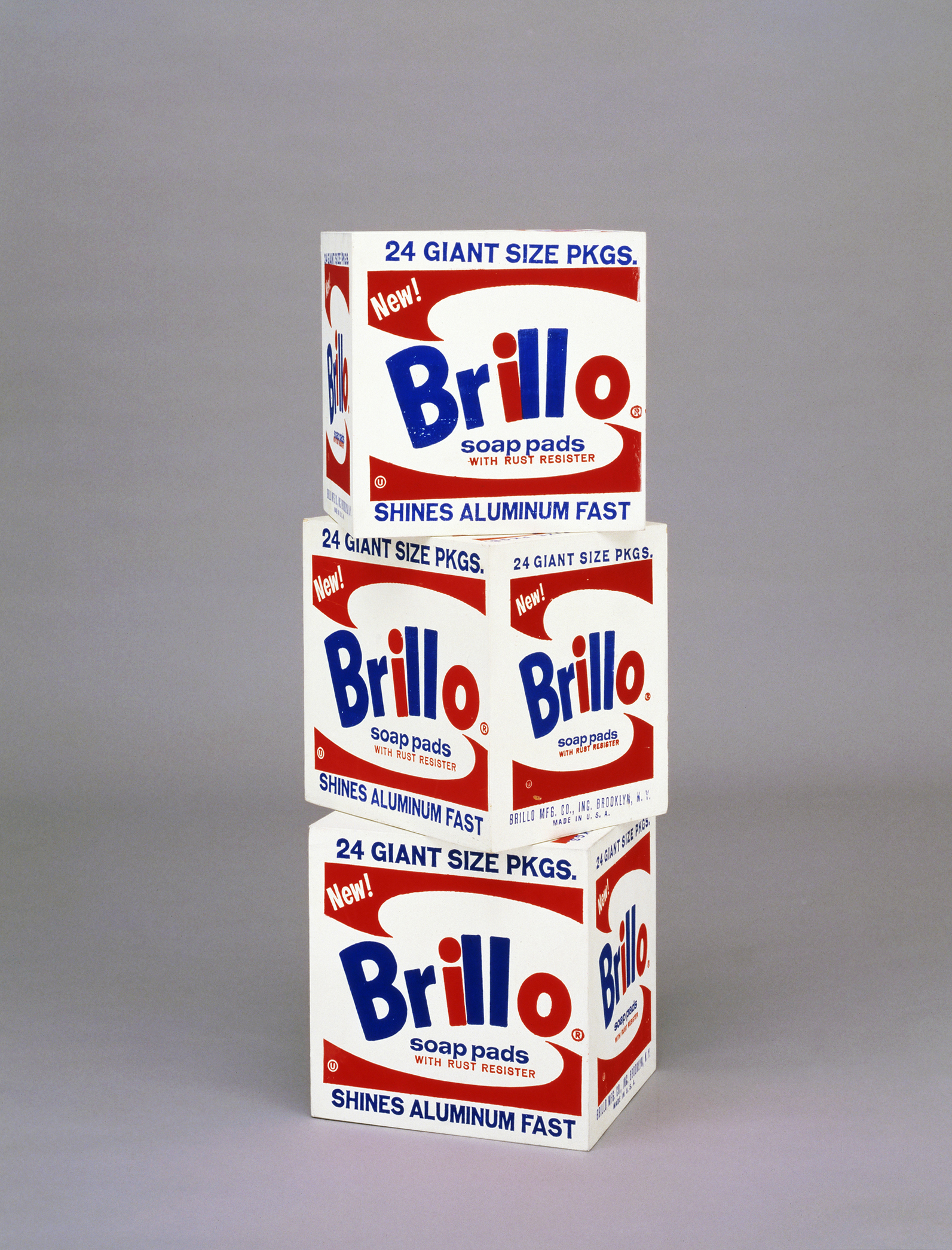 Museum Acquisition Fund in honor of the 80th Birthday of Louis S. Myers and partial gift of the Andy Warhol Foundation for the Visual Arts, Inc.

Though he is not known for his sculpture, in 1964 Warhol created an enormous number of simulated Brillo boxes, along with cartons for Kellogg’s Corn Flakes, Mott’s Apple Juice, Heinz Ketchup, Del Monte Peaches and Campbell’s Tomato Juice. As in his paintings of Campbell’s soup, Warhol elevated consumable products and consumer images to the level of art. The artist often exhibited these sculptures stacked in large groups, mimicking the way they might appear in a supermarket storage space.

Andy Warhol Brillo Box, 1964 (three works) Collection of the Akron Art Museum Whether as artist, filmmaker, or publisher of celebrity gossip, Andy Warhol lampooned fame and success even as he eagerly sought it. Along with other Pop artists of the early 1960s, he brought popular culture into the realm of fine art, turning banal items and images into lasting icons of their time. In addition to the Brillo boxes, the Akron Art Museum owns two paintings by Warhol, Single Elvis and Jackie; two portfolios of prints, Electric Chairs and Mao Tse Tung; and four other prints After majoring in art at the Carnegie Institute of Technology, the young Andrew Warhola moved to New York in 1949 and became Andy Warhol. Over the next decade he became a highly successful commercial artist and illustrator. In 1960 he began his first fine art paintings. Within two years his witty images of celebrities and mundane commodities had helped usurp Abstract Expressionism’s ambition for a spiritual, timeless art. Rebelliously calling his succession of studios “The Factory,” Warhol celebrated the commonplace with a commercialism unprecedented in the realm of fine art. Primarily a painter and printmaker, Warhol rarely produced sculpture. His first attempt was a silkscreened rendering of stacked soup cans on a wooden box, which he found unsuccessful. He then sent an assistant to the supermarket to bring back rectangular cartons that could be duplicated convincingly. The ones chosen were too “arty,” so Warhol himself went to the store to seek the most banal examples: cartons of Brillo soap pads, Heinz ketchup, Campbell’s tomato juice, and Del Monte peaches. “Plywood boxes were made to order in large numbers to the specified sizes, painted to match the color of the cardboard used for each, and then printed by hand from separate sets of screens” copied from the original boxes. 1 The total number of boxes produced may number as many as four hundred, with the largest number depicting cartons of Brillo soap pads. When first exhibited in 1964, these revolutionary and humorous works destroyed the illusion of art’s sacred mission and obliterated the distinction between mass-produced items and unique, handcrafted works of art. Warhol's boxes dramatically proclaimed that anything could become art and that art was infinitely reproducible, not rare or refined. Warhol wholeheartedly embraced photo-silkscreening, a method of mechanical reproduction used at the time for advertising purposes. This repetitive process was perfectly suited for an artist whose self-mocking ambition was “to be a machine” and who claimed, "I like things to be exactly the same over and over again.”2 Paradoxically, photo-silkscreening also depended on messy handwork to squeegee the images onto wood or canvas. The results were not exactly identical because of the uneven pressure of forcing the paint through the screen, errors in registration, and other slips. Unlike contemporary Minimalist sculptors, Warhol did not have his objects entirely made by industrial fabricators. Instead, he combined methods from the factory, the artist's studio and the craft workshop. He constantly explored ambiguities between originality and reproduction, repetition and variation, choice and accident. The artist who said that everyone would be famous for fifteen minutes was as well known as the celebrities he chronicled. Warhol fulfilled his belief that “being good in business is the most fascinating kind of art.” 3 He left an extensive legacy that includes a charitable foundation to support the visual arts and the Andy Warhol Museum in Pittsburgh, the largest museum in the world devoted to a single artist. - Mitchell D. Kahan, 2001 1. Marco Livingstone, “Do It Yourself: Notes on Warhol’s Techniques,” in McShine, ed., 72–73. 2. “Warhol in His Own Words,” selected by Neil Printz, in McShine, ed., 457. 3. Andy Warhol, The Philosophy of Andy Warhol (From A to B & Back Again). (New York: Harcourt Brace Jovanovich, 1975), 92. The Andy Warhol Museum. Pittsburgh: The Andy Warhol Museum, Carnegie Institute, 1994. Kynaston McShine, ed. Andy Warhol: A Retrospective. With essays by Robert Rosenblum, Benjamin H. D. Buchloh, and Marco Livingstone. New York: Museum of Modern Art, 1989.