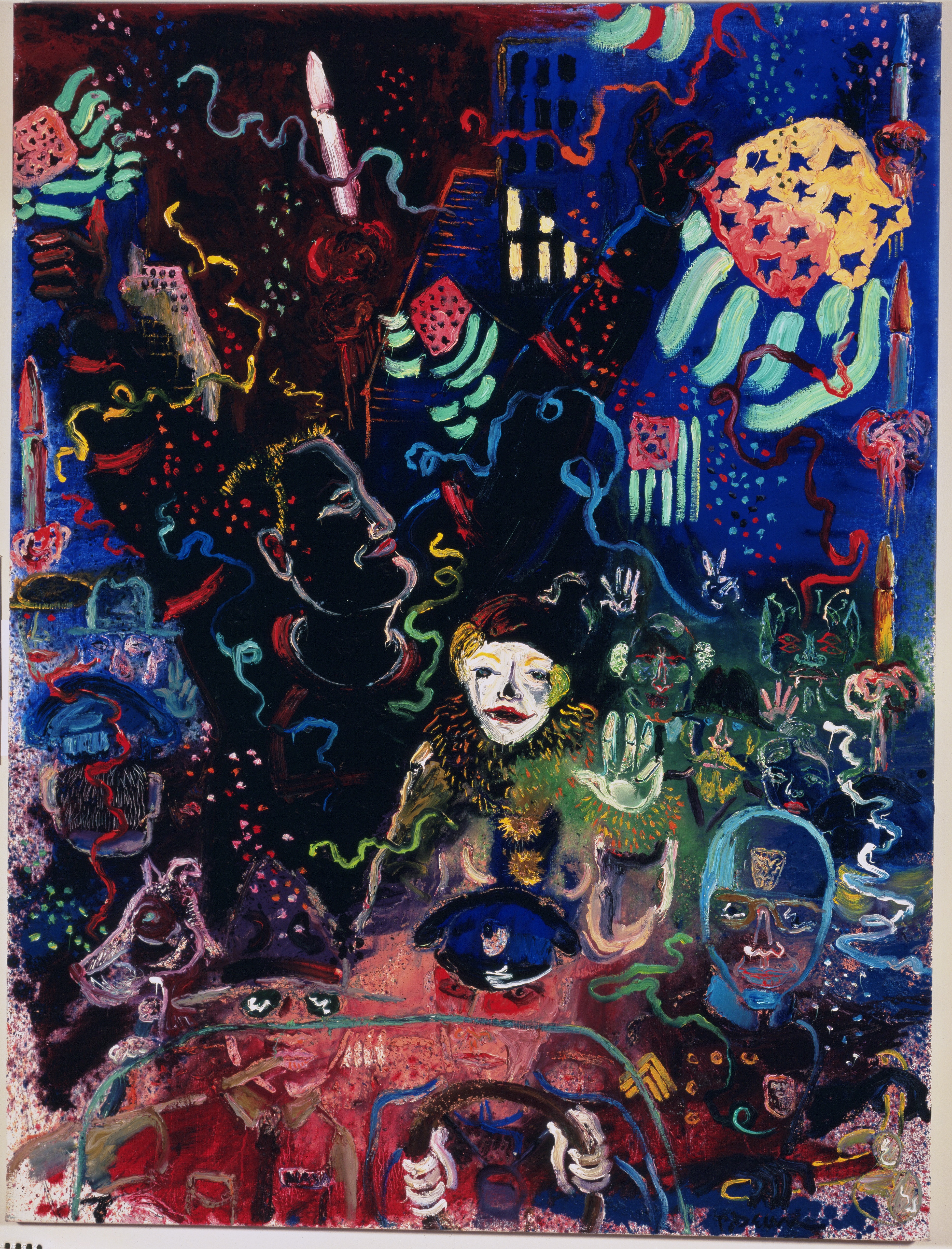 This work is one of a series of paintings by Dean depicting parades. “I love the total madness and confusion of a ticker-tape parade in New York City,” said Dean. “This could be any astronaut but I suppose it’s John Glenn.” Glenn’s wife rode beside him in the parade. Her need to put on a public face may be the reason for the white, clown-like mask. The title does not refer to the astronaut’s race but rather to the dark shadows that surround and engulf him.

Peter Dean Black Astronaut, 1985 Collection of the Akron Art Museum Known for his apocalyptic social satires, Peter Dean described himself as "an interpreter of reality into fantasy and back again”.1 He was brought to the United States by his parents in 1938 to escape the Nazis and raised in New York. As a child he was often taken to art museums. At Cornell and the University of Wisconsin, Dean studied geology, which may account for his lesser known but remarkably intense landscape paintings, such as Doove Kill Poppies (1984), also in the Akron Art Museum's collection. Dean decided to become a painter in 1959, and for the next ten years divided his time between painting and geological work until he could devote himself full-time to art. Dean has produced exuberant fantasies and canvases inspired by specific events, both of which can enter the realms of phantasmagoria and violence. He also adored parades and painted that subject as well.Black Astronaut is one of two paintings of an astronaut enjoying a ticker-tape parade. Both admiring and sarcastic, it celebrates the triumph of a blond, crew-cut, all-American hero, while combining themes of nationalism and technological prowess with traditional notions of personal heroism and masculinity. The yellow profile in the center is that of the youthful John Glenn, the first American astronaut to orbit the earth and later Ohio's longtime senator. Akron's version is a nighttime scene; "Black" in the title refers not to race but to the artistic practice of designating nighttime scenes or dark paintings as "black" works. Dean’s description of a related painting, Astronaut in New York, also applies to Akron's painting: I love the total madness and confusion of a ticker-tape parade in New York City. This could be any astronaut but I suppose it's John Glenn (although I don't know if he had a ticker-tape parade). In the painting he has his dog with him. Rockets are going off here and there. The chauffeur is down front with a big-wig from NASA—he sits there wearing a cowboy hat even though he's an Air Force guy. . . . I wanted a lot of confusing activity in the painting. So I mixed washes with my thick paint and used squiggly lines for the confetti and ticker-tape.2 Glenn did indeed have a ticker-tape parade in New York following his flight. He was accompanied by his wife, whose public face, one presumes, was not the white, clownlike mask so prominent in the painting. Black Astronaut depicts an historical event, but the details are invented, uniting reality and fantasy. Dean was interested in both the emotional and technical sides of art. He enjoyed experimenting with different ways to apply paint—spattering, squeezing from tubes, smearing—and would sometimes use his hands in addition to a brush. His thickly applied paint, and gestural approach reflects a longtime interest in Abstract Expressionism, in particular the painting technique of Jackson Pollock. Black Astronaut celebrates, yet also pokes fun at, male fantasies. Phallic rockets frame the scene, raising the obvious association of military prowess with sexual potency. The astronaut was one generation's American hero; the cowboy hat on the NASA official brings to mind an earlier embodiment of American adventure. Another male role model, the cop, takes on a more sinister tone. Dean’s recurring status as an outsider began when he was born a Jew in Nazi Germany. As an artist, he was a figurative painter of social conscience at a time when analytical abstraction and ironic aloofness reigned. And occasionally he was an art professor—with a science degree.3 Although Dean’s art is not yet widely recognized, his impassioned, almost eccentric vision may one day bring him the stature he deserves. - Mitchell D. Kahan, 2001 1. Quoted by Lucy Lippard, "Builder on the Edge of a Chaotic World," in Alternative Museum, 12. 2. Quoted in North Dakota Museum of Art, text accompanying plate 29. 3. See Frank Lewis, "Reflections on Peter Dean: A Customer of Culture," in Peter Dean: Paintings and Stories (Milwaukee: University of Wisconsin Art Museum, 1992), 10, 12. Alternative Museum. Peter Dean: A Retrospective. New York: Alternative Museum, 1990. North Dakota Museum of Art. Peter Dean. Essay by Carter Ratcliff. Grand Forks: North Dakota Museum of Art, 1989.