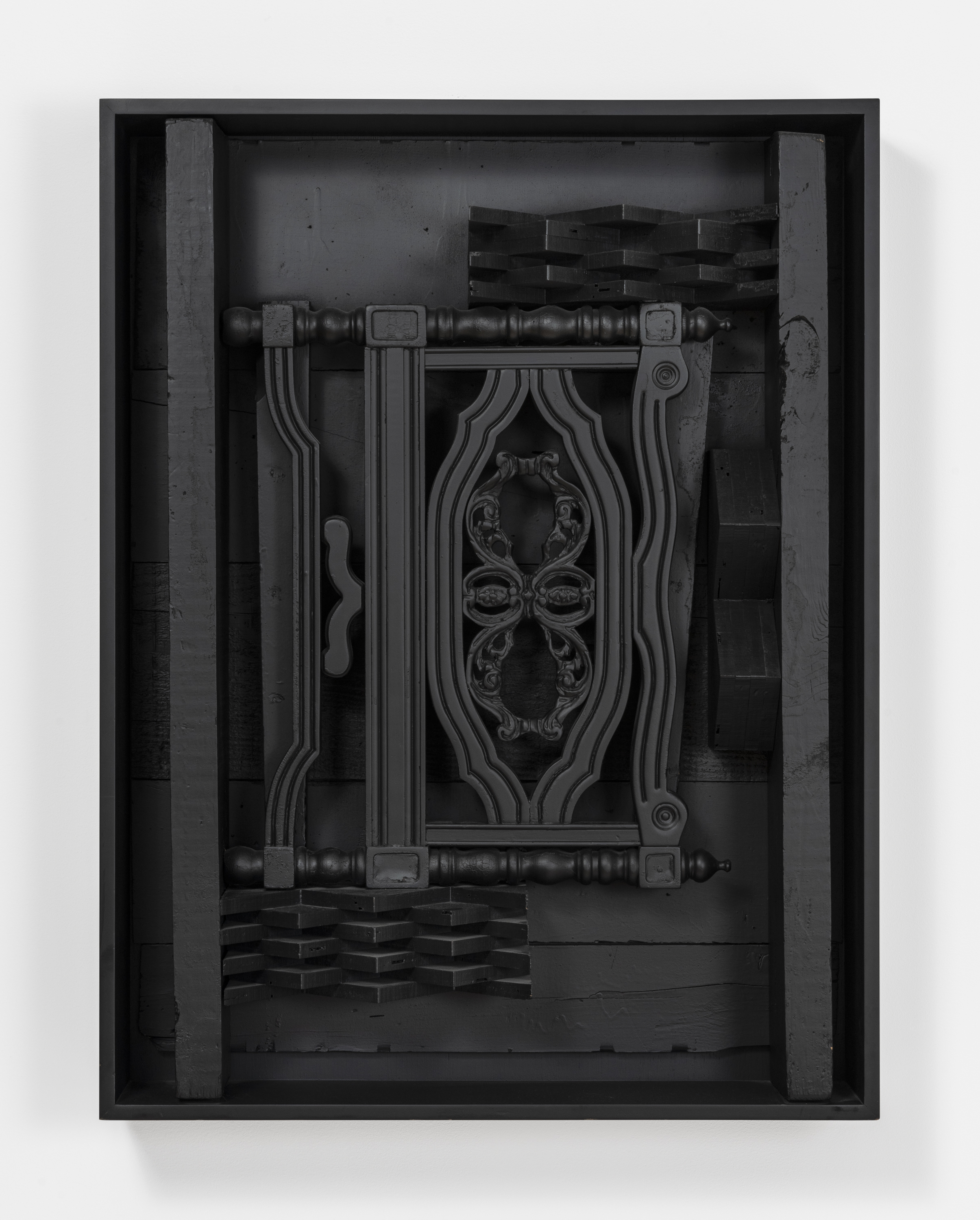 Gift of the American Art Foundation in memory of Louis S. Myers

Louise Nevelson earned international acclaim for box-like constructions she assembled from wood scavenged from her Manhattan neighborhood. Nevelson favored materials that had a history of use and painted her sculptures a single color, here a warm and reflective dark gray. The primary element in The Fugue is the headboard for a child’s bed. Turned vertically, it is bracketed by three sections of zig-zagging plywood and compressed between two rough-cut timbers. For the art critic John Russell, the emotional impact of Nevelson’s work “derives from the tension between the pure formal values … and the capacity of living art to redeem and regenerate what society has discarded.”

Louise Nevelson The Fugue, 1985 Collection of the Akron Art Museum In the late 1950s, after decades of obscurity, Louise Nevelson burst upon the New York art world with her stunning totemic sculptures painted matte black. Fashioned of wood, they were as unforgettable as their formidable and flamboyant creator. Nevelson's trademark look of tunics, pants, turbans, furs, layers of jewelry and two pairs of false eyelashes glued together was as exotic and mysterious as her art was dark and theatrical. Born Louise Berliawsky in Kiev, Russia, Nevelson grew up in Rockland, Maine, a member of one of the few Jewish families in town. Feeling isolated, she married young to escape her surroundings. After several years as a wealthy New York matron and young mother, Nevelson left her shipping magnate husband, defiantly refused alimony, and toiled without recognition as an artist for the next twenty years. During that time she studied at the Art Students League in New York with Hans Hofmann, acquiring the principles of collage and Cubism. Throughout the 1940s and 1950s Nevelson worked through a succession of styles influenced by Cubism, Surrealism, African, Native American, and pre-Columbian art before cultivating her mature voice. In 1958 the artist debuted Moon Garden Plus One, a sculptural "environment" that transformed the entire art gallery into a work of art. It brought her instant acclaim. Moon Garden's dominant element, Sky Cathedral, was a room-size installation composed of stacked boxes filled with fragments of carved wood and found objects such as chair backs, furniture legs, spindles, and sections of architectural ornamentation painted a single color. The Fugue, created nearly thirty years after her breakthrough, consists of the same types of forms Nevelson used in the 1950s. Like her contemporaries, the Abstract Expressionist painters, Nevelson worked without preliminary drawings or models: she allowed the abstract shapes to dictate the form of her box-shaped compositions. Depending on their arrangement, her sculptures might appear brooding and ominous, or quirky and humorous. Whether an individual box was hung upon the wall, like The Fugue, or grouped with others in complex architectural assemblages, Nevelson's sculptures had an archaeological quality. The unifying coat of black paint did not erase the history or distinguishing characteristics of the diverse elements, but at the same time, the personality of an individual component never threatened to overwhelm the whole. In The Fugue, the primary element is a headboard or frame for a child's bed. Turned vertically, it is bracketed by three sections of zig-zagging plywood and compressed between two rough-cut, two-by-six timbers. Not exactly black, as black is the absence of tone or light, The Fugue is painted a warm and reflective shade of very dark gray. What could have been a riotous cacophony of oppositions—antique and new, rough and smooth, baroque and modern—was tamed by the artist into a harmonious composition. Musically, a fugue is a composition of two or more parts, each with an independent melody, which harmonize and gradually build into a complex form having distinct voices. The Fugue could not be more appropriately titled. Louise Nevelson was a pioneer. Perhaps unwittingly, she struck an early blow to the authority of New York's male-centered art world. Her sculpture, today so familiar, then stood in radical contrast to the type of abstract, open-form, welded metal sculpture dominating the art scene in 1950s America. A chronic collector, Nevelson recycled society's discards, transforming the overlooked and abused detritus of daily life into art. In doing so, she created sculpture that challenged the premises of what constituted fine art in the 1950s and prefigured the dominance of installation and environmental art in the 1960s. - Jeffrey Grove, 2001 Albee, Edward. Louise Nevelson: Atmospheres and Environments. New York: Clarkson N. Potter in association with the Whitney Museum of American Art, 1980. Lisle, Laurie. Louise Nevelson: A Passionate Life. New York: Summit Books, 1990. Nevelson, Louise. Dawns + Dusks: Taped Conversations with Diana MacKown. New York: Charles Scribner's Sons, 1976.