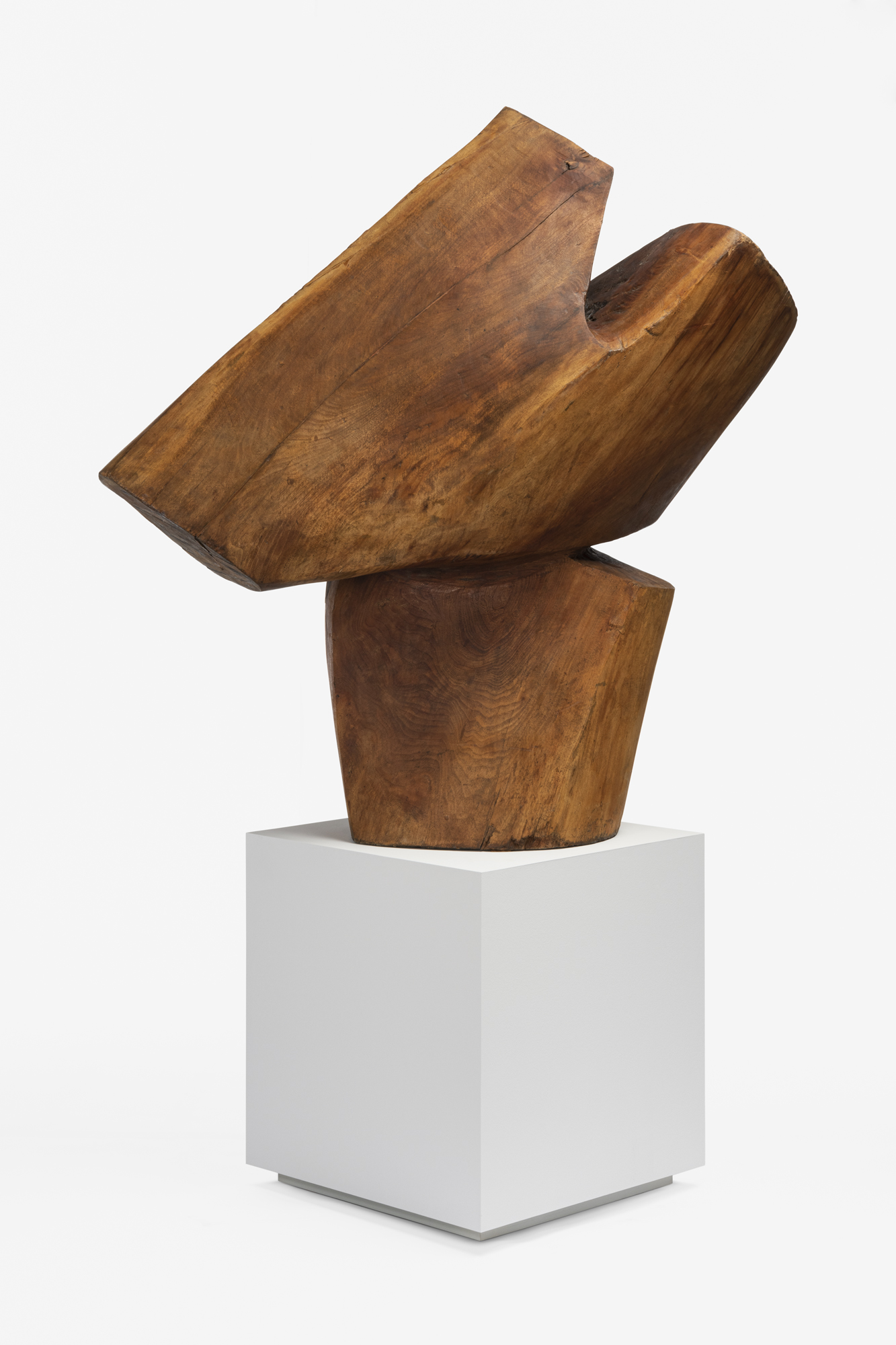 The Mary S. and Louis S. Myers Endowment Fund for Painting and Sculpture

Hague, who lived in rural New York State, drew materials and inspiration for his sculptures from the landscape around him. He titled his wood sculptures after the location where he found the log used to make them, followed by the type of wood. This work probably refers to a river – Angel Mill Brook – near his home. Hague made this sculpture by cutting deeply into the trunk of a single walnut tree. Although he dramatically reshaped the log, Hague’s goal was not to produce a perfectly smooth, man-made shape but instead to let the struggle between man and nature show.

Raoul Hague Angel Millbrook Walnut, 1964 Collection of the Akron Art Museum Angel Millbrook Walnut was carved more than forty years after Raoul Hague left Turkey to study art in the United States of America. Hague attended Iowa State University, then transferred to the School of the Art Institute of Chicago. While in Chicago he formed a vaudeville act with a young Italian dancer who prevailed upon him to change his name for the sake of the act: Haig Heukelekian, of Armenian descent, became Raoul Hague, of indeterminate origin. In New York in 1925, he studied at the Beaux-Arts Institute of Design and the Art Students League. Around 1925, Hague met John Flannagan (1895–1942), a self-taught stone sculptor who espoused direct carving rather than the traditional Beaux-Arts system in which the artist first models the piece in clay, then translates it into stone through the mechanical practice of “pointing.” In direct carving, the resulting work is uncompromised by intermediate steps. Flannagan associated the technique with pantheistic urges to reveal the sleeping subject within the rock by stripping away excess material. Hague became a practiced hand at direct carving in stone and wood in the 1930s, creating portrait heads, upright and reclining female torsos, standing figures, and primitivistic totems. After World War II he settled into a cabin in Woodstock, New York. Because the local rock (bluestone) was unpredictable and difficult to carve, he became committed to working exclusively in wood. He carved local woods including chestnut, poplar, cottonwood, butternut, and walnut, and named each sculpture for the wood and the place of its origin.1 Initially he used found wood, dragging logs and fallen trees from swamps and forests. Later, when timber in the area was being harvested, Hague would reserve a tree, then rush off by motorbike to confirm a preferred chunk for purchase. He chose his wood for mass, density, and weight: “I’ve got to have . . . girth. At least 42 inches in diameter. I’m interested in height also. I can’t handle more than six foot four and one-half inches in height [in my studio]. I’ll take . . . either [a] drum shape or a crotch. . . . In spite of what people think, I do not see the graining at all. I am not choosing the wood because of its graining.” 2 He favored walnut because “it doesn’t check very much and it cuts evenly. . . .You can make space in the wood; go in…. I cut the mass into fragments and I move in it. One can orchestrate in the wood. . . . You make a cut. From then on it follows. Like the jazz musician, music comes out of you.” Until the late 1950s, critics insisted on finding female torsos, reclining figures, and references to classical sculpture in his work, but Hague’s forms became increasingly independent of figuration. He cut into 800-pound chunks to find abstract forms and relationships. He balanced negative (cut away) spaces by undercutting and shaping opposing positive faces of the wood. Angel Millbrook Walnut is a “crotch shape” that has been upended. From one side it reads as a balanced composition of three closely related forms, and from its opposite side, as a downward-thrusting monolith. As Hague grew more knowing, he carved his sumptuous woods into ever more seductive abstract forms by rhyming elements, pooling shadows, and shaping reflecting bosses to cast light on complex forms. Hague’s sculpture embraces wood’s nature and its natural references. It is profoundly handmade, deeply felt, and enduring. - Gerald Norland, 2001 1. There is no documentary evidence for the source of the wood for this sculpture and thus for the name Angel Millbrook Walnut. Given Hague’s method of assigning titles, the sculpture may have been named after Angel Mill Brook, a stream about seventy-five miles southeast of Woodstock, in Sullivan County. There is a Millbrook, New York, but it has no feature in or near it with the name “Angel.” 2. All quotations in this entry are from “Raoul Hague interviewed by Paula Giannini,” Art International 24 (August-September 1981): 8–25. Hess, Thomas B. “Raoul Hague.” In Twelve Americans. New York: Museum of Modern Art, 1956, 44–50. Raoul Hague. With an introduction by Dorothy C. Miller and an essay by Gerald Nordland. Washington, D.C.: Washington Gallery of Modern Art, 1964. Raoul Hague. (Includes a reprint of Paula Giannini and Raoul Hague, “An Interview,” Art International 24 [August/September 1981]: 8–25.) New York: Raoul Hague Foundation, 1999. Steinberg, Leo. “Torsos and Raoul Hague.” Arts (July 1958). Revised and reprinted in Other Criteria: Confrontations with Twentieth-Century Art. New York: Oxford University Press, 1972, 272–76.