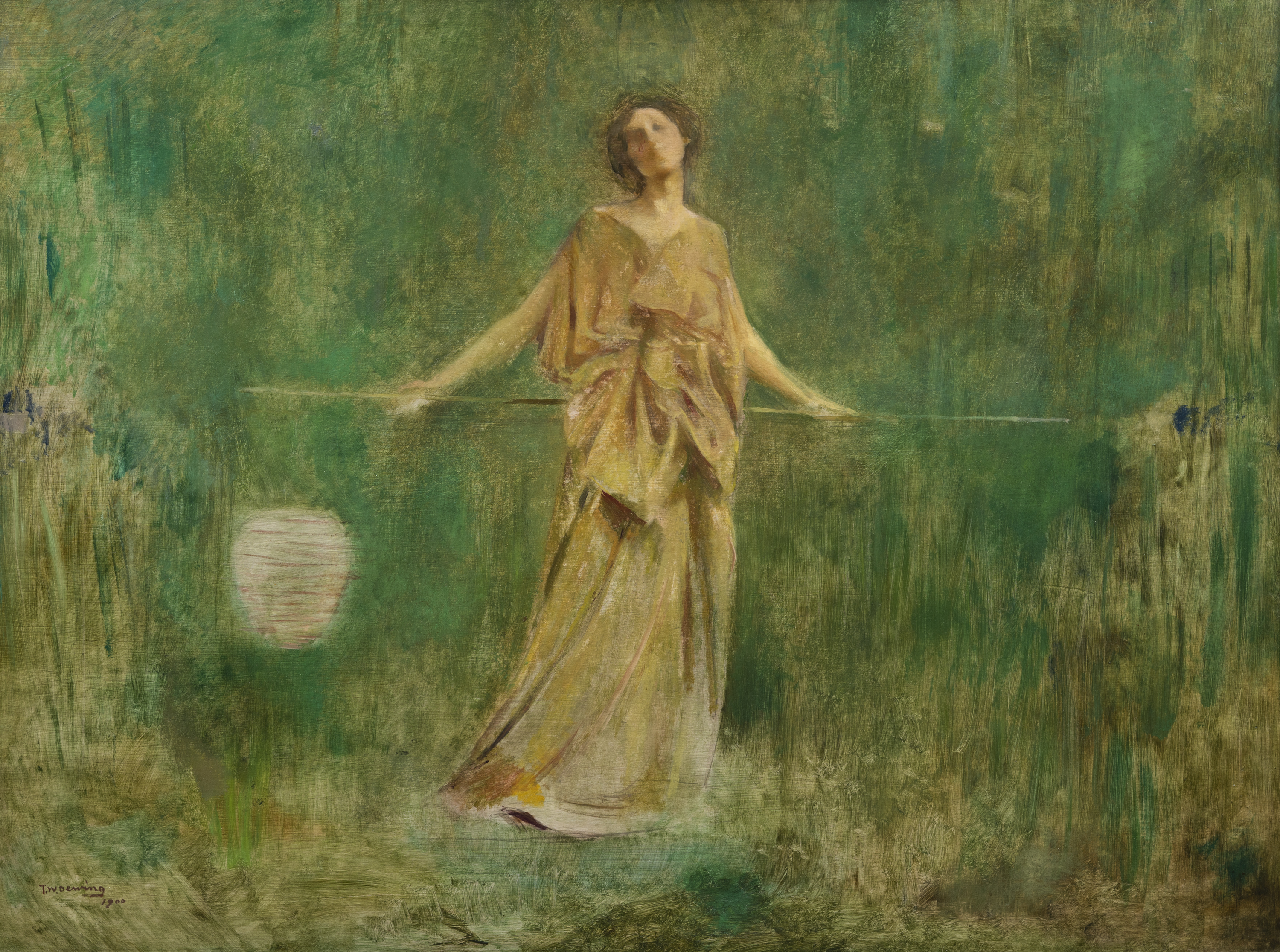 Symphony in Green and Gold

This major work by Dewing reflects the pastimes that the painter enjoyed during summers in Cornish, New Hampshire, where he and other artists developed an elite art colony inspired by cultures of the past. The colonists performed plays in “Greek costume” and used Japanese-style paper lanterns, like the one shown here, to light the paths around their homes. The painting’s limited color scheme and daringly sketchy brushwork were partly inspired by American artist James McNeill Whistler, whose work Dewing admired.

Thomas Wilmer Dewing Symphony in Green and Gold, 1900 Collection of the Akron Art Museum Symphony in Green and Gold belongs to a group of landscape "decorations" that Thomas Dewing painted during his summers at the renowned artists' colony of Cornish, New Hampshire. Dewing valued these outdoor themes because they were less easily understood than his interiors, and because they appealed to those "choice spirits," as he termed them, who were his most discerning clientele.1 When Akron art collector Edwin C. Shaw purchased this painting, Dewing wrote him, "the Green and Gold that you bought . . . is as fine as anything of my decorations."2 The lush Cornish terrain, reached after a day's journey by train from New York, offered its inhabitants a respite from the city where they spent most of the year painting. In Cornish, Dewing and his friends created an environment for themselves inspired by the art of the past. They built Italianate villas with vine-draped porches and planted formal gardens, which they furnished with high-backed, semicircular wooden benches reminiscent of ancient Greek and Roman seating. Dewing introduced gardening and elegant dinner parties. He also staged theatricals with Greek and Roman themes similar to the one he depicted here. While the Cornish colonists enjoyed dressing up in "greek costume," as Dewing put it, they also may have found another source of inspiration in third-century Tanagra figures.3 Discovered during the 1870s in archaeological digs near Athens, these tiny statuettes with their elegant drapery and dainty poses captured the imagination of many artists. Symphony in Green and Gold is related to a series of screens that Dewing executed in Cornish. The wooded environment surrounding the chiton-clad figures in the first of these, The Four Sylvan Sounds, was inspired by that of the art colony. A subsequent commission, Classical Figures, depicts this landscape as a mere billowing mist. The jewel-toned background in Symphony is even more abstracted, its emerald curtain of color referring perhaps to the ravines that punctuated the Cornish terrain. As in Dewing's earlier Classical Figures, the model for this painting was probably Mollie E. Chatfield, whose likeness can be recognized in the distinctive high cheekbones of the finely modeled head. Her pose recalls other works of the same year—as for example the figure at the right in The Garland, painted just before Dewing worked on Symphony. At that time the artist wrote that he considered his latest picture "new" and "better," a reference perhaps to the increased size of the figures.4 Accordingly the artist featured a single large image in Symphony, balancing its verticality with a horizontal bamboo pole and lantern. This lantern had appeared earlier in Dewing's landscape decoration Before Sunrise. Here, however, it is central to the composition, seeming to emanate from within the primed wood panel itself. The glow signals the picture's Cornish theme, for after late-night dinner parties the artists sometimes walked home along a pathway illuminated by a lantern such as this. For Thomas Dewing the purpose of art was to evoke memory and imagination. With its classical theme and clear reference to the exotic aspects of Cornish, Symphony pays homage to the cultivated and fanciful world of the art colony that had inspired his art for more than two decades. - Susan A. Hobbs, 2001 1. Thomas Dewing to Charles Lang Freer, February 16, 1901, Letter 110, Freer Gallery of Art Archives. 2. Dewing to Edwin C. Shaw, September 9 (ca. 1920), Edwin C. Shaw Papers, Archives of American Art, Smithsonian Institution. 3. Dewing to Freer, January 10, 1894, Letter 40, Freer Gallery of Art Archives; Kathleen Pyne, "Classical Figures: A Folding Screen by Thomas Dewing," Bulletin of the Detroit Institute of Arts 59 (spring 1981): 10. 4. Dewing to Freer, September 14, 1899, Letter 100, Freer Gallery of Art Archives.