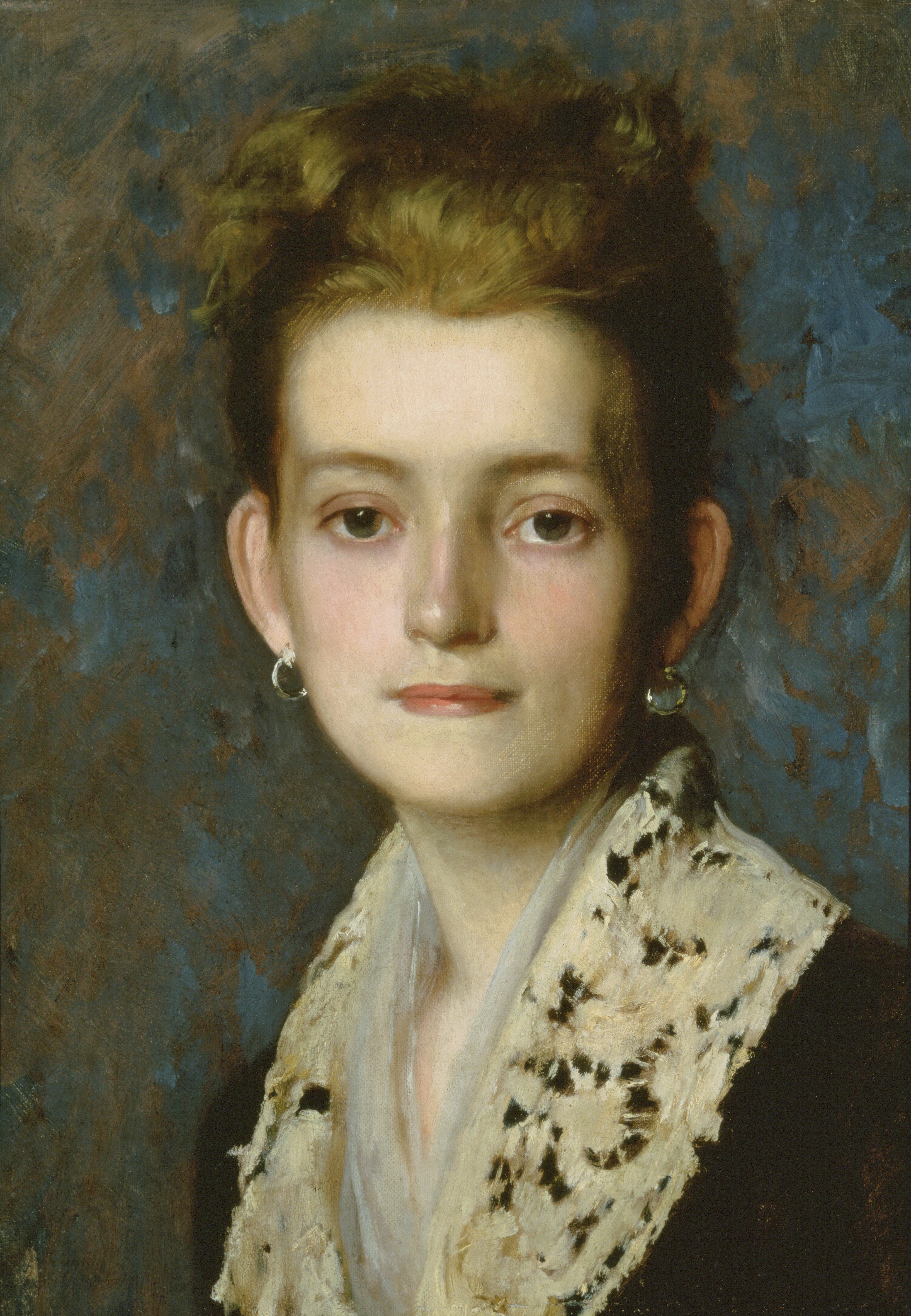 Duveneck’s younger sister Molly, a free-spirited woman, caused a scandal by having an affair with an older married man in conservative 1890s Cincinnati. Duveneck’s refined brushwork, evident in Molly’s silky hair, translucent skin and delicate lace and chiffon collars, is balanced by the young woman’s open expression and direct gaze.

Frank Duveneck Miss Molly Duveneck, around 1888–90 Collection of the Akron Art Museum Frank Duveneck—popular painter, respected teacher, and a distinguished Ohio artist—has been praised as "one of the most talented artists America had ever produced."1 Yet the critic who conferred that honor in 1926 chose to title his essay "The Problem of Frank Duveneck," in part because only seven years following his death, the artist was already nearly forgotten. One of the reasons for Duveneck’s lack of renown may have been his choice to live a quiet life in Cincinnati, away from the world’s art centers. It was to that city, rather than New York, that he returned following extended periods of studying and teaching in Europe. As a teenager in Covington (just across the river from Cincinnati), Duveneck worked as an assistant to a German church decorator from whom he learned carving, gilding, and the rudiments of painting. He first went to Germany to study at the Royal Academy. Following a brief time back in Ohio, he returned to Europe to teach painting in Germany and Italy. In the 1870s, Duveneck established his reputation through portraits and figure studies. Like his friend William Merritt Chase (see pp. 62–63), he was a leading exponent of a realist painting style developed in Munich that was characterized by quick, bravura brushwork and transparent, spontaneous color. In the early 1880s a neoclassical, or Italianate, style began to emerge in Duveneck's art, distinguished from his earlier work by the appearance of brighter color, more thinly applied paint, and carefully blended brushwork. Figures were defined with crisp, linear silhouettes, and the jarring color combinations of his Munich style were replaced with creamy, delicately hued modeling. The portrait Miss Molly Duveneck is a masterful amalgamation of the lessons Duveneck had learned. From a distance the canvas reflects his later, smoothly applied, Italian style, but a closer inspection also reveals the quickness of handling typical of his Munich period. Through these distinct qualities the artist captures the simple beauty and psychological complexity of his subject. Duveneck’s sister Mary (known as Molly) was one of the youngest children in a brood of ten. Frank, as the eldest, assumed a protective role when their father died. Molly was a vivacious, free-spirited woman who never married. She flaunted social convention, causing a social scandal in the 1890s through her affair with a married man. This portrait was painted around the time Molly was twenty years old; already she was projecting a powerful fire and an icy attitude. The veil of innocent childhood is still there, yet the determination of a strong-willed young woman shines through. Following the deaths of Duveneck's wife and his mother, Molly became the artist’s constant companion and devoted housekeeper. Less than forty years old when he died in 1919, she became stricken with grief and died twelve days later. In recent years Duveneck's “problematic” omission from the histories of American art has begun to be corrected. For its compelling beauty and astonishing technical virtuosity, Miss Molly Duveneck makes a powerful argument for the artist’s inclusion. - Jeffrey Grove, 2001 1. Frank E. Washburn Freund, “The Problem of Frank Duveneck,” International Studio 85 (September 1926): 39. Duveneck, Josephine. Frank Duveneck: Painter-Teacher. San Francisco: John Howell Books, 1970. Neuhaus, Robert. Unsuspected Genius: The Art and Life of Frank Duveneck. San Francisco: Bedford, 1987. Quick, Michael. An American Painter Abroad: Frank Duveneck's European Years. Cincinnati: Cincinnati Art Museum, 1987.