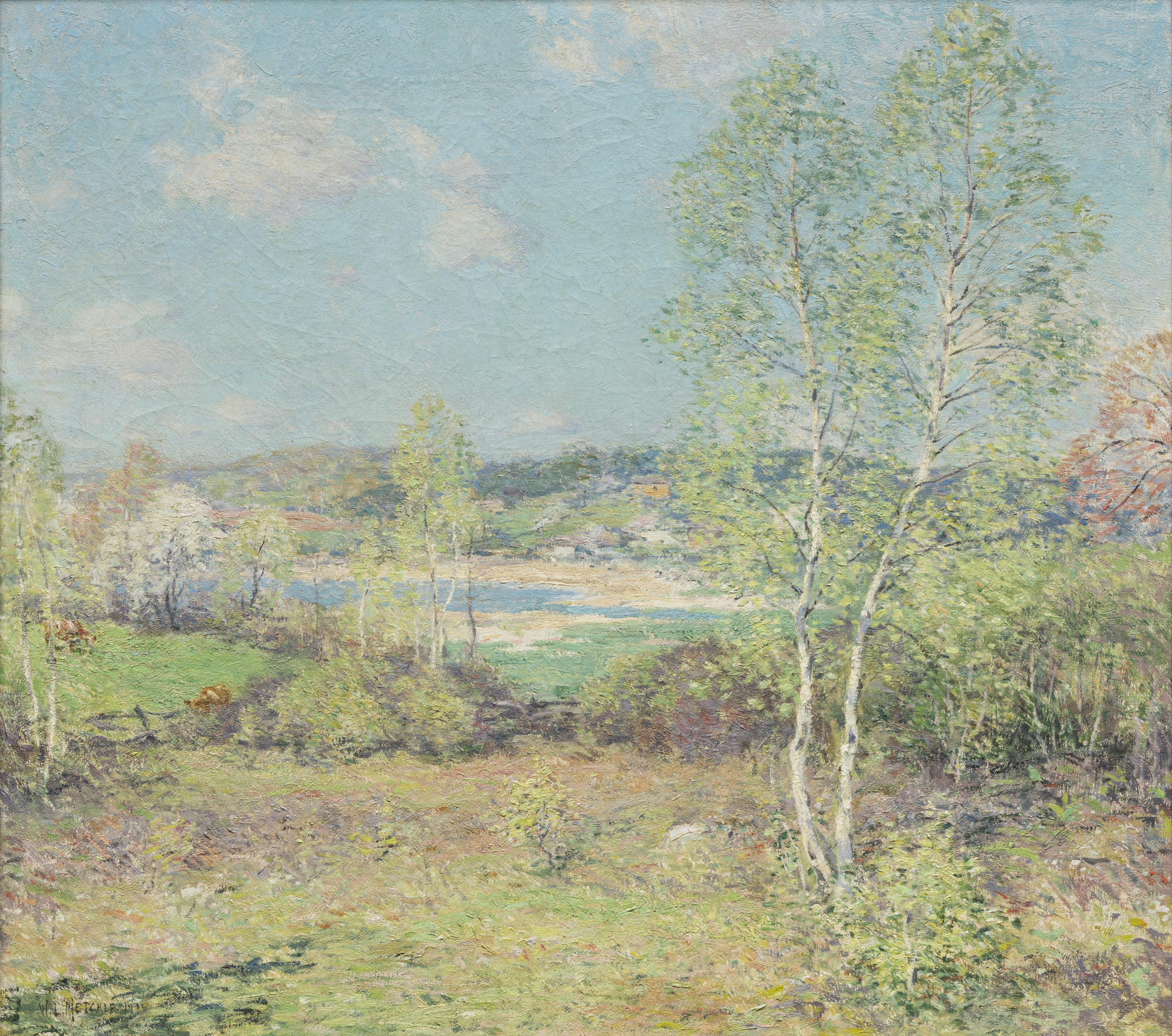 "Maytime," wrote Metcalf, “has always been a favorite of mine, in as much as I felt that I had succeeded in getting some of the elusiveness of that beautiful spring morning.” This painting exemplifies Metcalf’s ability to render the character of the individual seasons through careful observation in nature. Assigning a transcendent quality to Metcalf’s paintings, one critic explained, “He would do more than paint the portrait of a place. He would so interpret it that it disclosed the essence of our countryside everywhere.”

Willard L. Metcalf Maytime, 1909–14 Collection of the Akron Art Museum Maytime, wrote Willard Metcalf, “was painted at Leete’s Island, Connecticut, in the spring of 1909. . . . This canvas has always been a favorite of mine, in as much as I felt that I had succeeded in getting some of the elusiveness of that beautiful spring morning.1 Begun six years after the artist gave up a career as a New York illustrator to pursue plein-air painting, Maytime exemplifies Metcalf’s ability to render the character of the individual seasons. Tacking holes in the canvas reveal that he probably painted the work while out of doors, where he would have been able to observe firsthand the transitory effects of light and color. The artist’s facility in rendering the essence of spring in this work earned him the praise of critics when he first exhibited it in January 1910 at the Montross Gallery in New York. One critic claimed that “Maytime is one of the most poetic interpretations of the swift, tense mood of the New England spring that I have ever seen.” Metcalf's broken brushwork and bright palette reflect the influence of French Impressionism, which the artist had absorbed as a student in Paris in the 1880s. Blues and yellows predominate; shadows are rendered in violet and other hues preferred by the Impressionists over the black and gray shadows of academic painting. However, like other American artists, Metcalf merged this foreign style with a more traditional, realist approach in which the forms of objects do not dissolve and spatial relationships are clearly defined. In MaytimeMetcalf produced a highly ordered composition using the square format for which he is known. Dividing the canvas in half by a center horizontal line, he employed a series of diagonals to lead the viewer back into space. For example, a strategically placed opening in the center of the canvas reveals a view across a marsh and beyond to a yellow house perched on a distant hill. Having successfully captured the color of foliage and the quality of light associated with a spring morning in Maytime, Metcalf later that year began a series of snow scenes exploring the traits of color, light, and mood associated with winter. He was not alone in his interest in the New England countryside, for at the turn of the century a number of other artists also found the region to be rich in subject matter. Metcalf, however, was singled out from his fellow painters as the artist who could best celebrate nature; one critic wrote of his ability to render the “truth to the very soul of the American landscape.” Metcalf painted Maytime in the spring of 1909 and made changes to the work in 1914, covering large portions of the light gray-blue sky with a brighter cerulean blue while adding greenish grays to the foreground. He also altered the date in the lower left-hand corner from 1909 to 1914. Why he made these modifications is unclear. He painted few pictures in 1914 and, despite earlier critical acclaim, his sales were extremely low. Perhaps in an effort to make Maytime more saleable Metcalf reworked the canvas. These alterations seem to have been successful: the painting went to a Milwaukee art dealer in 1917 and was sold that same year to Akron collector Edwin C. Shaw. - Jack Becker, 2001 1. Letter from Willard Metcalf to Thomas Dunbar, March 15, 1917; Edwin C. Shaw Papers, Archives of American Art, Smithsonian Institution. 2. Review in Evening Mail and Express, January 6, 1910, not paginated; Metcalf Papers, Archives of American Art, Smithsonian Institution, roll N70–13, frames 516–20. 3. Royal Cortissoz, “Willard Leroy Metcalf,” in Commemorative Tributes of the American Academy of Arts and Letters, 1905–1941 (New York, 1942), 511. De Veer, Elizabeth, and Richard Boyle. Sunlight and Shadow: The Life and Art of Willard L. Metcalf. New York: Abbeville, 1987. Gerdts, William H. American Impressionism. New York: Abbeville, 1984.