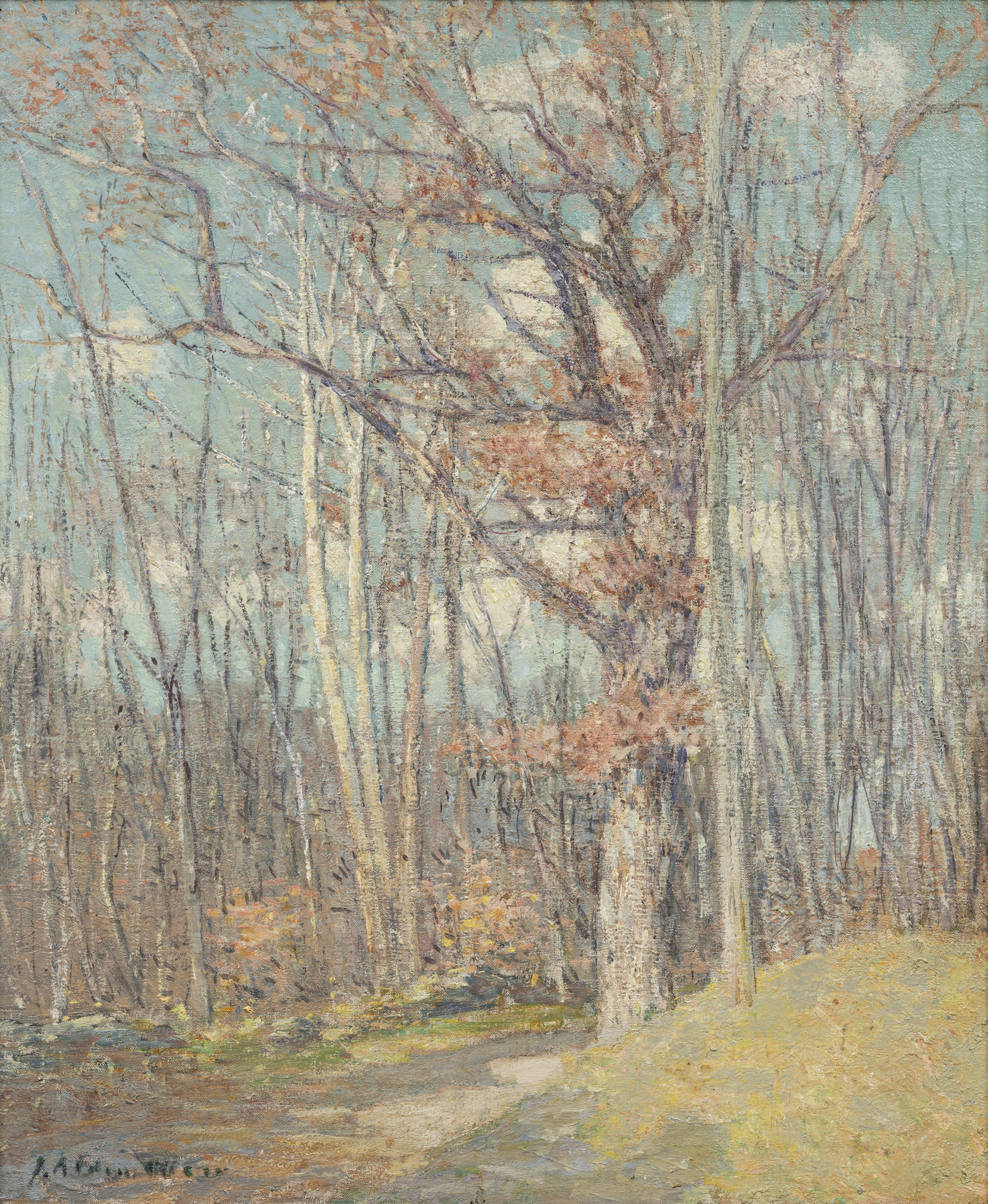 Weir made this painting near the Windham, Connecticut home owned by his in-laws. Early in his career, he worked in an old master style. In the 1880s, he adopted the energetic brushwork of the impressionists because it allowed him to express the vital life force he perceived in nature. He reminisced: “I had been trying to see through the eyes of greater artists, trying to render things I did not see, and so I was unable to get at the things that really existed.”

Julian Alden Weir White Oaks, 1913 Collection of the Akron Art Museum Julian Alden Weir’s poetic rendering of a woodland scene exemplifies the artist’s nearly forty-year interest in the Connecticut landscape. After his 1883 marriage Weir purchased a farm near Branchville, Connecticut, which would be his summer home until his death in 1919. New York artists such as Albert Pinkham Ryder, John Twachtman, and others were also attracted to the area, and the countryside around Weir’s farm inspired some of the most memorable images in turn-of-the-twentieth-century American painting. White Oaks portrays the Connecticut landscape on a late autumn day.1 A dirt path in the foreground quickly disappears from view in the dense woods. Tall slender trees, absent of leaves, create a pattern of vertical forms against a blue sky speckled with small round clouds. A giant oak tree, which retains some of its leaves, occupies a dominant spot in the right foreground of the composition. Weir chose not to present the traditional view of autumn—a forest rendered in bright golds, oranges, and reds—but rather to portray a clear day in late autumn when the leaves have fallen from the trees and the blue sky can be seen through what is usually dense with foliage. His unconventional approach focuses upon the intimate qualities of the rural landscape rather than the drama of bold color changes associated with the season. Painted during the last decade of his life, White Oaks conveys Weir’s fascination with the American landscape and with creating his own Impressionist style in order to capture the transient beauties of the countryside and the passing seasons. He applied paint directly onto the canvas with a rapid wet-in-wet technique so that the creamy whites of the clouds behind the central oak tree mix with the delicate pink and rust colors of the leaves. Using varied brushstrokes, Weir produced thick creamy areas of impasto (thickly layered paint). Contrasting with these heavily painted areas are places such as the foreground, where the light gray ground (the first layer of paint covering the canvas) shows through. Although Weir adopted the Impressionist practice of creating shadows with blues and light gray-violets rather than blacks or browns, he emphasized the contours of individual forms and did not entirely dissolve objects in an Impressionist manner. The year that White Oaks was painted Weir suffered a heart attack. Perhaps as a consequence, in his later works, including White Oaks, he shunned the pure hues and brighter colors of his earlier paintings, preferring a delicate pastel palette.2 Descended from a family of distinguished artists, Weir mastered figure drawing and traditional methods through study at the National Academy of Design in New York and the Ecole des Beaux-Arts in Paris. Friendships with French realist painter Jules Bastien-Lepage and American expatriate James McNeill Whistler influenced the direction Weir would take as a painter. Although he embraced French Impressionism later than many of his colleagues, he made a significant contribution to the style's acceptance by American audiences. White Oaks reveals how Weir merged a subdued Impressionistic palette and technique with his interest in the rural countryside to create a unique and vital American landscape art. - Jack Becker, 2001 1. Letter from Dorothy Weir Young to Edwin C. Shaw, 1922, Edwin C. Shaw Papers, Archives of American Art, Smithsonian Institution. 2. After his heart attack Weir’s brushwork also became less controlled; see Exhibition of Paintings by Julian Alden Weir (New York: Montross Gallery, 1914), not paginated. Bolger Burke, Doreen. J. Alden Weir: An American Impressionist. Newark: University of Delaware Press, An American Art Journal Book, 1983. Gerdts, William H. American Impressionism. New York: Abbeville, 1984.