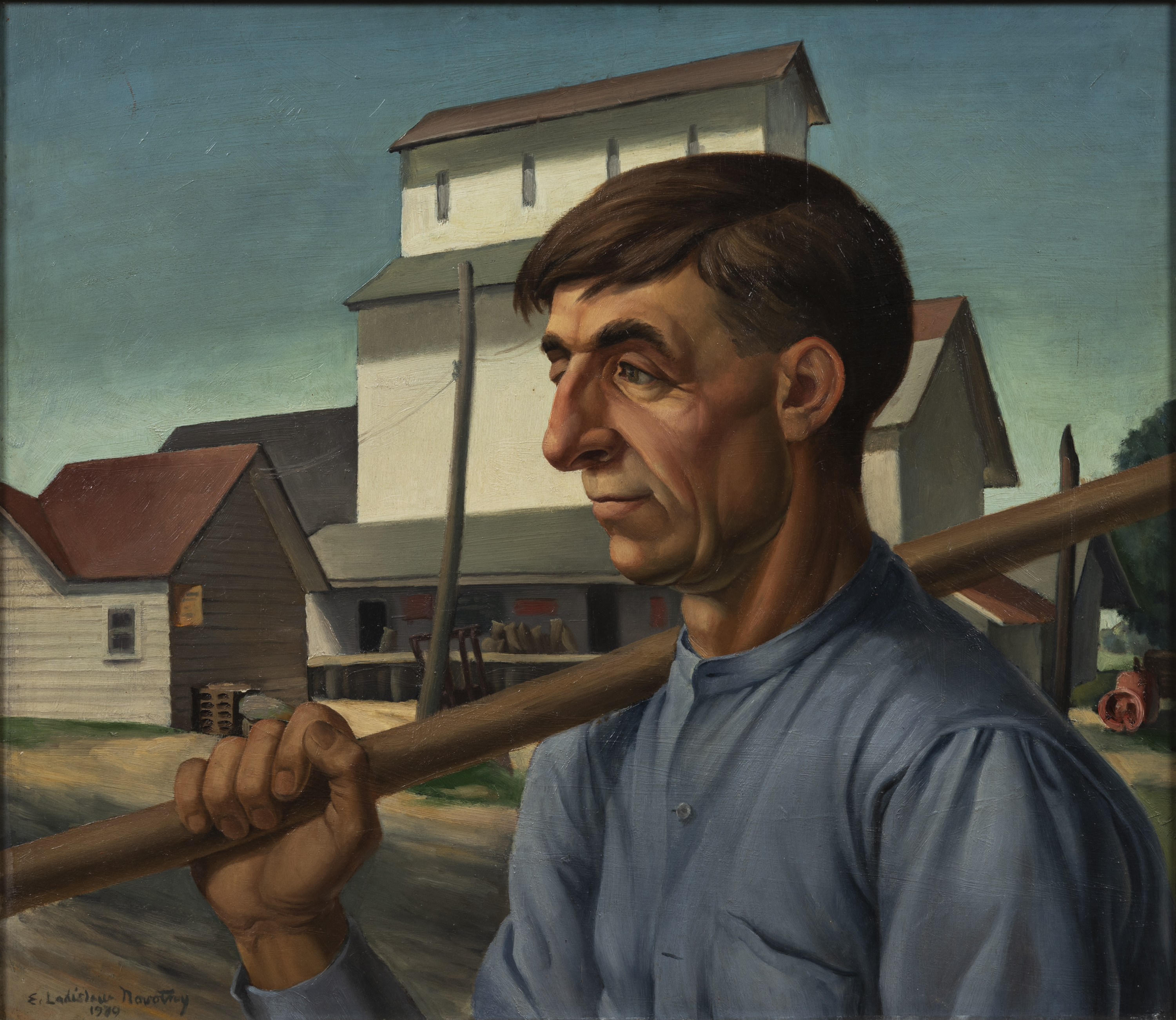 Gift of the artist in memory of Mrs. Janet Schulman

Novotny, who taught art at Kent State University for nearly 40 years, embraced portrait painting traditions that call for the illumination of a sitter’s character or personality. This figure’s weathered face, beefy hand and simple work shirt suggest a man of industry, conviction and integrity. Posed in profile, the man is also reminiscent of Renaissance-era portraits in which the sitter is shown from the side to lend a sense of dignity or nobility. Novotny painted the mill in the background of this image while visiting the lumber town of Onsted, Michigan, but added the figure in his Ohio studio.

Elmer Novotny Citizen of Onsted, 1939 Collection of the Akron Art Museum A portrait and landscape painter, Elmer Ladislaw Novotny remained a traditional realist throughout his career, resisting the revival of abstraction after World War II. Though they possess only a regional reputation, his emotionally powerful and technically superb paintings from the 1930s deserve a wider audience. Novotny’s first paintings were done under the direction of his father, an amateur artist. At age thirteen, the precocious son completed the first of over three hundred portrait commissions created throughout his career. He attended the Cleveland School of Art (now Cleveland Institute of Art) on scholarship and, with awards and support from Cleveland patrons, traveled to London and Zagreb for further study. After receiving degrees from Western Reserve College and Kent State University, he obtained a teaching position at Kent. He remained there for four decades, retiring as chairman of the School of Art in 1974. Both the Akron Art Institute and the Butler Institute of American Art mounted solo exhibitions of his work. “I’ve always considered portraiture a fine art and not a commercial venture,” Novotny explained, citing the vast number of old master portraits hanging in museums. “I truly hope my portraiture is still a high art form.”1 Citizen of Onsted fulfills Novotny’s ambitions. An arresting profile of a worker in a Michigan logging town, it also serves as an icon of America during the Depression. The mill was painted on site, which partially accounts for the modest size of the painting. The figure, however, was added in Novotny’s studio in Ohio, a practice recalling that of earlier landscape painters who combined various outdoor sketches into finished compositions in the studio. The rural subject and the tightly rendered naturalism of the painting ally Novotny with the American Scene movement. This artistic development, which had its heyday in the 1930s, was a reaction against the currents of technology, modernism, and abstraction typically identified with major cities on the East Coast and in Europe. American Scene painting's relationship with European art, however, was complicated. Like Grant Wood’s famous American Gothic, Novotny’s subject is identifiably American and rural, but the European old masters hover in the background. Novotny’s realism recalls Dutch and Flemish naturalism; his unusual choice of casein (similar to tempera in using egg as a base instead of oil) points to an interest in the centuries-old practice of handmade paint. A revival of such esoteric painting techniques was common among American realists in the 1930s and 1940s as an antidote to mechanization and mass production. Updating older European practices into an American dialect was not merely a technical choice. It suggested an artist’s identification with traditional values—that is, individualism and capitalism as opposed to communism or socialism, and sometimes a preference for isolationism as opposed to internationalism. Nevertheless, a close look at Akron’s painting reveals the impact of modern art. The close-up cropping of the farmer’s figure recalls both the compositions of modernist photography and the dynamic angularity of certain images by Toulouse-Lautrec and Degas (who were also influenced by photography). Regardless of its artistic antecedents, Citizen of Onsted is most notable for its emotional appeal. In the dignity and determination of his subject, Novotny, an artist raised in the city, has created a paean to America’s heartland. - Mitchell D. Kahan, 2001 1. Quoted in “Portrait of a Realist,” by Robert Downing and William Bierman, in Beacon Magazine, Akron Beacon Journal, July 21, 1974, 9. Robinson, William H., and David Steinberg. Transformations in Cleveland Art, 1796–1946: Community and Diversity in Early Modern America. Cleveland: Cleveland Museum of Art, 1996.