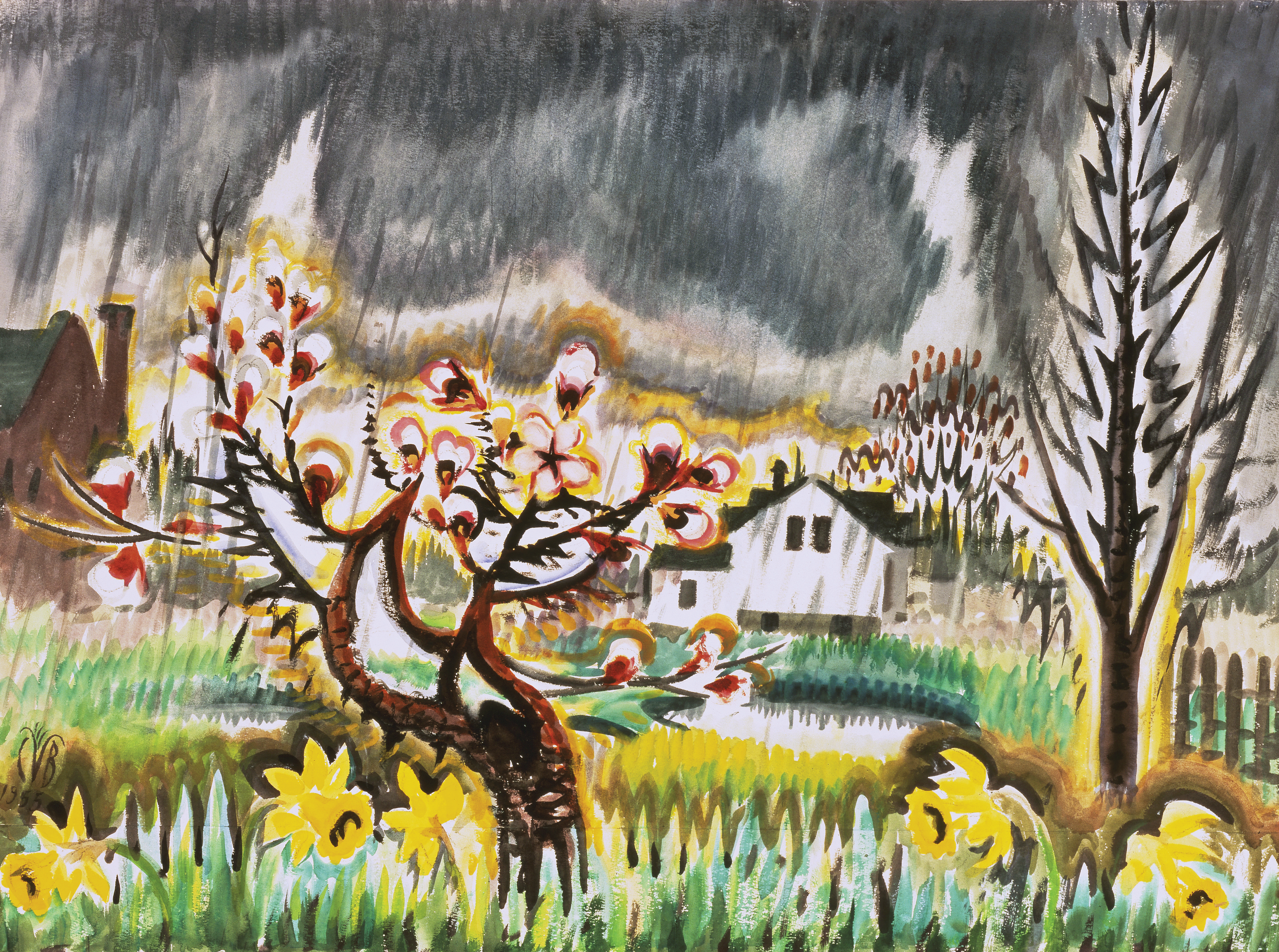 Watercolor and charcoal on paper

This painting represents Burchfield’s preferred subject matter, the landscape. It is likely one of the artist’s many depictions of his own backyard near Buffalo, New York. Using watercolor, his signature medium, Burchfield sought to communicate the energy of the natural world. He does not attempt to replicate nature but instead expresses his personal experience of a storm. Active, slashing brushstrokes loosely define the forms of trees and grass, while gray streaks coalesce into a stormy sky and a supernatural yellow glow permeates the scene. Burchfield often wrote poetic phrases on the backs of his works, and on this painting he inscribed, “It almost seems as if the thunder-clap caused the peach tree to burst into bloom.”

Charles Burchfield Spring Thunderstorm, 1955 Collection of the Akron Art Museum Charles Burchfield's one great inspiration was nature. Unlike the French and American Impressionists who preceded him, Burchfield made it his goal not simply to record nature but to invest each image with a resounding emotional and visceral impact. Raised in Salem, Ohio, by his widowed mother, Burchfield was already producing watercolors of flowers and trees in high school. Graduating as valedictorian in 1911, he secured a scholarship to study at the Cleveland School (now Institute) of Art. Only a year after graduating from art school, and while working full-time in Salem, he was producing watercolors that qualify him as one of the century's finest practitioners of the medium. Burchfield moved to Buffalo in 1921 to work as a designer for a wallpaper company. He married and later moved to the suburb of Gardenville, where he raised a family and remained until his death. By 1929 Burchfield was able to devote his energies entirely to art. He occasionally taught, including two summer appointments at Ohio University in the 1950s. Eventually he achieved the status of a senior American artist, with numerous awards and major surveys of his work. Except for a middle period of moody realism, Burchfield's art consisted of evocative, abstracted watercolors of nature. Spring Thunderstorm is typical of his later work, which tended to be large in size and fashioned from several sheets of paper pasted down side by side. This method allowed the artist to expand his working surface according to compositional needs, independent of the standard sizes of watercolor paper. Such works were often preceded by numerous pencil sketches, but during the mid-1950s, when Spring Thunderstorm was painted, Burchfield was often overwhelmed with ideas and began painting without preparatory studies. Spring Thunderstorm is almost certainly one of Burchfield's many depictions of his backyard in Gardenville, a prosaic place that nevertheless excited the artist's imagination repeatedly during the last twenty years of his life: This tiny corner of the earth that is ours gives a feeling of deep content and security; this is the base to which we can always come back, and be ourselves, alone, completely free from the outside world. There is the sky, above the village housetops, so vast and mysterious . . . . Through it I have access to infinity. And down below, very tangible, is the yard and the garden and how good all the things in it seem.1 Like the literary romantics of the nineteenth century, Burchfield found in nature a manifestation of God’s divinity. External reality was inspirational to Burchfield but limited: "While I feel strongly the personality of a given scene, its ‘genius loci’ as it were, my chief aim in painting is the expression of a completely personal mood."2 He was devoted to the turn-of-the-century concept of "synesthesia," a belief that there are equivalents between the different senses. For example, colors, lines, or shapes could suggest specific emotions, states of mind, even sounds. He had special interests in storms, snow, and the passage from winter to spring, when nature's sounds, visual effects, and physical sensations are the strongest. “It almost seems as if the thunder-clap caused the peach tree to burst into bloom,” Burchfield wrote about this painting, in which he transforms a few daffodils, an awkwardly blossoming tree, and the naked branches of early spring into a celebration of life’s renewal.3 He seems to say that those white blossoms will ultimately drive away the rain clouds and the last blast of winter. Living on the outskirts of an industrial city in the harsh snowbelt of western New York State, Burchfield was at one with nature when extolling its evocative drama. - Mitchell D. Kahan, 2001 1. Journal entry, July 16, 1934. See Townsend, ed., 52. 2. Charles Burchfield, Monograph 13, Foreword by Charles Burchfield (New York: American Artists Group, 1945), not paginated. 3. The quotation and the work’s title were handwritten on a piece of paper glued to the back of the original frame. The painting has been published and, until recently, was listed in the museum’s records as Spring Shower. Research for this book revealed that the notes were probably written by Burchfield himself. Around the time that J. Frederick Seiberling bought this work from the Rehn Galleries, Burchfield mentioned the sale of a work titled Spring Thunderstorm in a letter dated January 7, 1957, Frank K. M. Rehn Galleries Records, Archives of American Art, Smithsonian Institution. Baur, John I. H. The Inlander: Life and Work of Charles Burchfield, 1893–1967. Newark: University of Delaware Press, 1982. Townsend, J. Benjamin, ed. Charles Burchfield's Journals: The Poetry of Place. Albany: State University of New York Press, 1993.