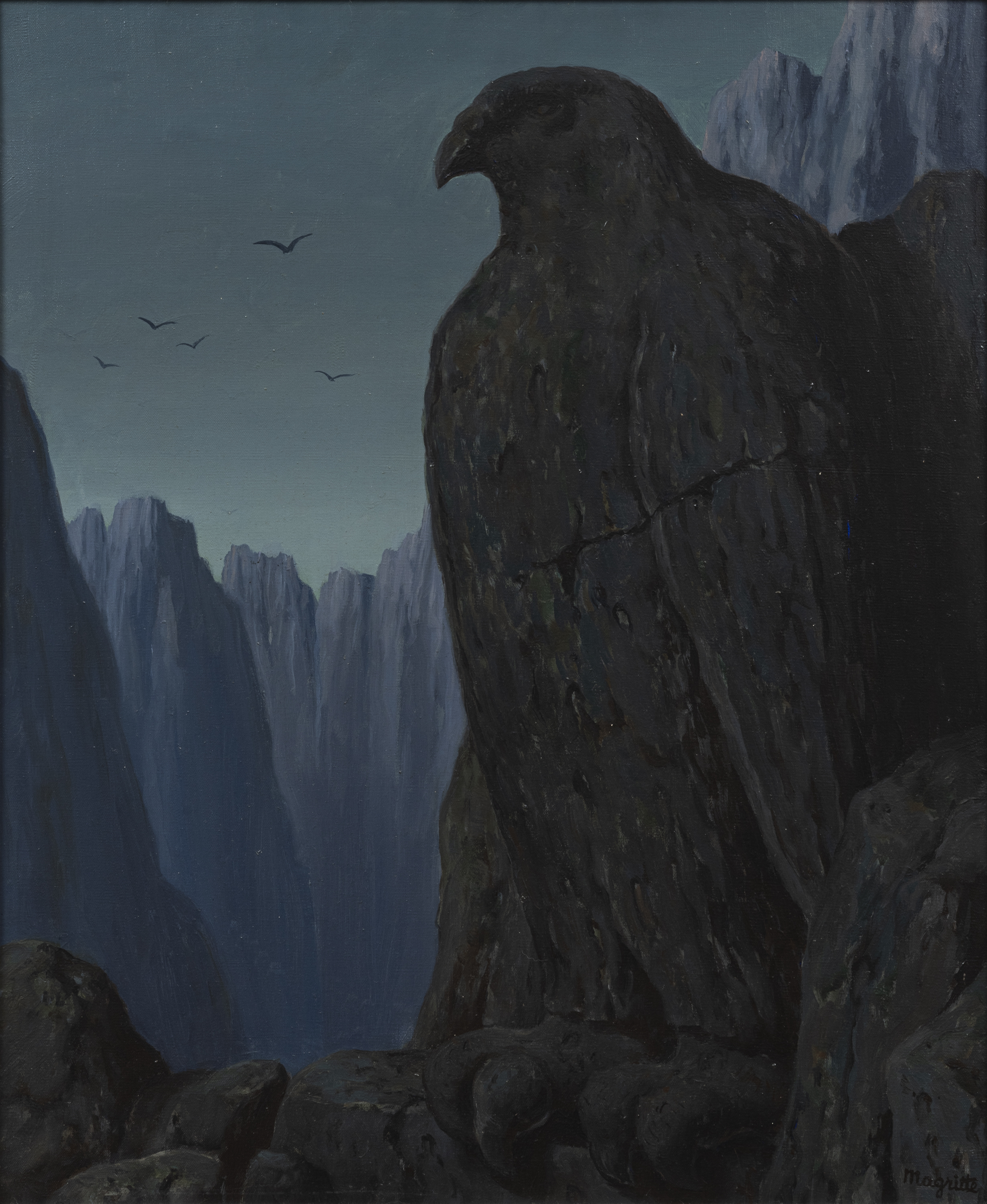 Purchased with funds from anonymous donors

Magritte was a leading practitioner of surrealism, a movement that explored the unconscious, dreams, sexuality and fantasy. In his paintings, he often transformed animate and inanimate objects into stone, heightening awareness of the passage from life to death and usefulness to uselessness. Magritte chose the title of this melancholy painting only after it was finished. It was meant to offer a poetic perspective, not describe the image. He claimed, “What I think about constantly and strikingly, is the mystery of life. That, you cannot represent. You can only evoke it.”

René Magritte Les Pas perdus (The Wasted Footsteps), 1950 Collection of the Akron Art Museum The family of René-François-Ghislain Magritte relocated numerous times during his childhood, but by far the most traumatic event of his youth was his mother’s drowning when he was thirteen. Perhaps these events added to his sense of the inexplicable and his preoccupation with the inconstancy of meaning. After studies at the Academy of Fine Arts in Brussels, Magritte married and worked for many years in advertising and commercial art. From 1927 to 1930 he lived outside Paris and was a key participant in the salons, publications, exhibitions, and intellectual life that centered around the new literary and artistic movement Surrealism. His canvases, however, are not voyages into Surrealism’s world of irrational dreams but are instead conscious subversions of reality that aim to reveal the mystery behind what is seen. Magritte explored le mystère with calm deliberation. Returning to Brussels, he cut the image of a bourgeois banker rather than an artist, dressing in the dark suit, tie, and bowler hat that appear in so many of his paintings. The man who painted methodically at a small easel placed on an oriental rug in his wife’s sitting room was preoccupied with images of the implausible and an often frustrated or violent eroticism. His paintings demonstrate that language is arbitrary and descriptions of reality are merely conventions with no basis in truth. Les Pas perdus dates from the latter part of Magritte’s career, when some of his most famous images were produced—the bowler-hatted men falling like raindrops, the giant rock suspended above the sea. Although these were fertile years for the artist, the title of Akron’s painting suggests a mood of melancholy and self-doubt. Perhaps it is relevant that Magritte had recently abandoned an experimental phase which was very poorly received by his wife and friends as well as critics. The title can be translated colloquially as a waiting room, and indeed the eagle appears to be waiting or guarding the vertiginous peaks surrounding some enchanted domain. Magritte frequently recycled his images into new configurations. Barren alpine vistas and petrified imagery appear throughout his later work. The stone eagle reappears often, most notably in the numerous versions of Le Domaine d’Arnheim, where a rocky mountain ridge takes the form of an eagle’s head. In another work, the eagle’s profile crowns a granite marker bearing the name of Coblenz, a German city that was bombed in World War II. In Magritte’s petrified world, both animate and inanimate objects can be transformed into stone, poignantly heightening awareness of the passage from life to death and from usefulness to uselessness. Magritte's titles were chosen after his canvases were completed. Sometimes suggested by writer friends, the titles do not directly describe what is seen but offer a poetic perspective on the image. Les Pas perdus was also the title of a collection of writings published in 1924 by Surrealist leader André Breton. One wonders whether the painting somehow refers to Breton, whom Magritte greatly respected but who had once asked Magritte's wife to remove the cross from around her neck when visiting his house, prompting the couple to leave. Despite these stabs at meaning, interpretation is always frustrated in Magritte’s work. He sought what he called “the poetic title,” not a descriptive title that “has nothing to teach us; instead, it should surprise and enchant us.”1 “What I think about constantly and strikingly, is the mystery of life. That, you cannot represent. You can only evoke it.”2 - Mitchell D. Kahan, 2001 1. René Magritte, unpublished paper; quoted in A. M. Hammacher, René Magritte (New York: Harry N. Abrams, 1973), 27. 2. René Magritte, quoted in “The Square Surrealist,” Newsweek (January 3, 1966): 57. Ottinger, Didier, ed. Magritte. Montreal: Montreal Museum of Fine Arts, 1996. Sylvester, David. Magritte: The Silence of the World. New York: Harry N. Abrams, 1992. Whitfield, Sarah, and Michael Raeburn. Oil Paintings, Objects and Bronzes. Vol. 3 of René Magritte: Catalogue Raisonné. Ed. David Sylvester. Antwerp: Mercatorfonds, Menil Foundation, and Philip Wilson, 1993. Distributed in the United States by Rizzoli International. Les Pas perdus is reproduced as no. 750, p. 174.