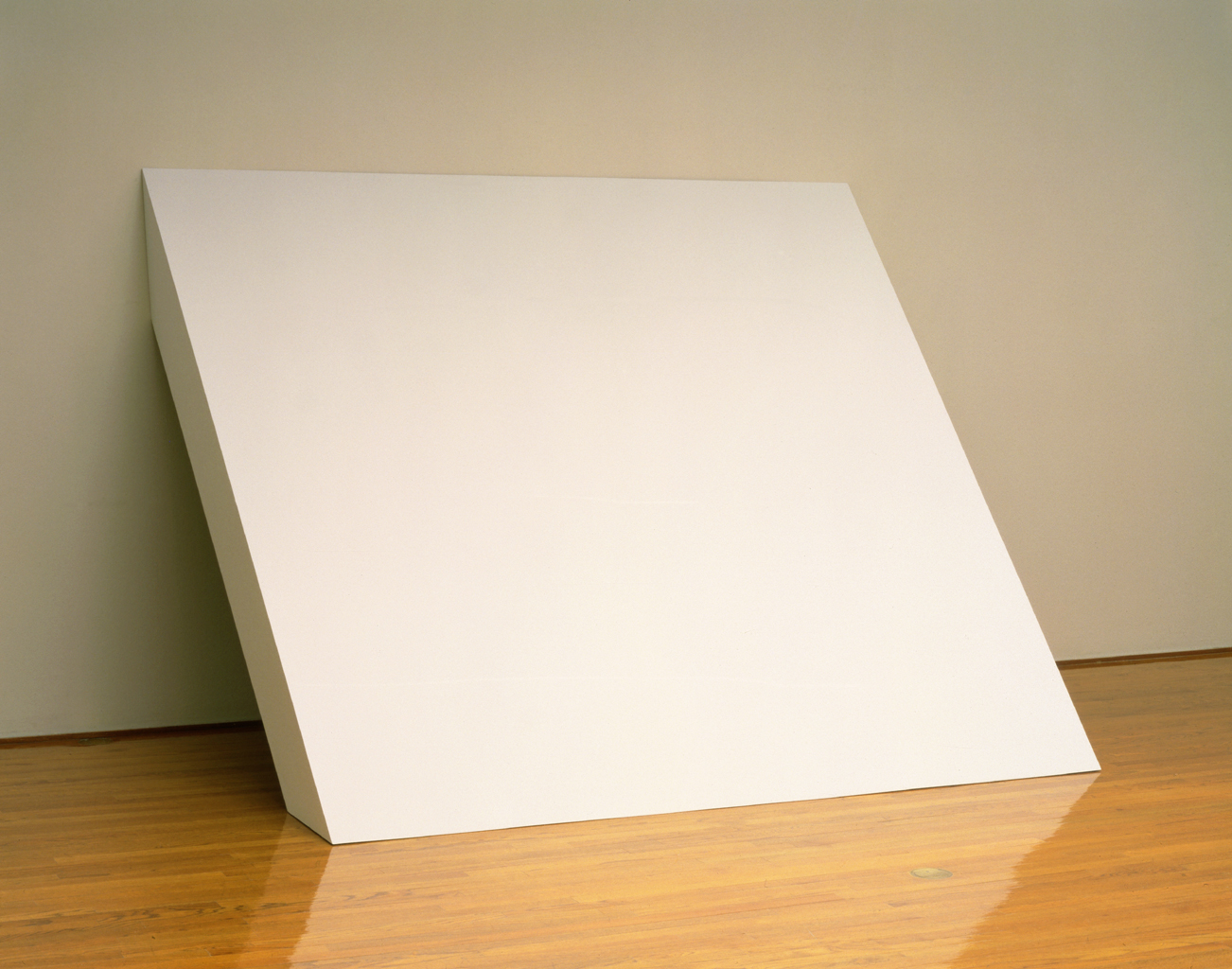 As a founder of Minimalism, a style of radical simplification that emerged in the 1960s, Robert Morris was one of the most controversial American sculptors of his time. The artist believed geometric shapes and industrial fabrication were means of reducing art to its most basic and universal components. This austere form leans heavily against the wall, relying on the architecture for its structure and highlighting the interdependence of art and its environment. An untitled monumental stone sculpture by Morris is located on the plaza behind the Seiberling Federal Building and U.S. Courthouse at Main and Market Streets.

Robert Morris Untitled, 1964 and 1979 Collection of the Akron Art Museum As a youth Robert Morris attended Saturday morning art classes at his hometown museum; later he studied engineering in college and then art at the Kansas City Art Institute. Following army service in Korea, he painted and worked with theater and film on the West Coast in the 1950s before turning to sculpture in 1959. In 1961 Morris moved to New York, where he earned a master's degree in art history. Throughout the 1960s and 1970s Morris made a major impact as a teacher, an artist, and an art critic as well as an activist on political issues ranging from artists' rights to the Vietnam War. He was a key theorist for the Minimalist movement (see Donald Judd, pp. 150–51, and Sol LeWitt, pp. 180¬¬–81), but after a few years' involvement with Minimalism, Morris restlessly moved on to new approaches, including outdoor environmental art and, much later, political paintings. In late 1964 the first version of Untitled was exhibited in a solo show at New York's Green Gallery. It was one of seven geometric painted plywood forms suspended from the ceiling, leaning against walls, or set freestanding in the gallery. Morris’s exhibition became a manifesto for Minimalism, one of the key international developments of the time. Although the exhibition was criticized for lacking aesthetic interest, the overall installation was subtly theatrical, like a Minimalist stage set, reflecting Morris’s involvement with dance and performance art. That first version of Untitled was destroyed. Another plywood version, now also destroyed, was exhibited at the Akron Art Institute in 1978, at which time the decision was made to acquire the work if it could be produced in a more durable material. In 1979, following the artist's specifications, the piece was reconstructed in aluminum by Lippincott Inc., an industrial fabricator. On arrival at the institute it was painted light gray.1 At that time Morris also created for Akron's Federal Building an outdoor work: a series of mammoth stone blocks that recall Stonehenge, but arranged in a straight line instead of a circle. The history of Akron's Untitled points to a primary characteristic of Minimalism: the artist's thought processes take precedence over personal touch or technical skill. The plywood versions were replaceable, easily refabricated for each new exhibition. The aluminum version was made at a factory. Thus, Untitled rejects the notion of art as a handmade treasure and celebrates its new status as a manufactured item. Although Untitled, when leaning against the wall at its prescribed angle, is about the height of a man, it hardly exudes intimacy. Instead, it offers an imposing physical encounter that invites visual examination rather than touching. In a widely discussed article from 1966, Morris memorably proclaimed: "The sensuous object . . . has had to be rejected."2 Sculpture would not represent things we know from life but would investigate aesthetic issues such as scale and the relation of the object to the viewer and to surrounding space. An art object would be seen as a single unit, a whole or Gestalt, that would explore basic elements such as volume, gravity, and shape. Multipart complex arrangements were to be banished. In Akron’s sculpture, the emphasis on concept and theory reflects a moment when art gazed not at life outside the studio but at itself. While some critics have extolled Morris’s intellectual vision for sculpture, others have chided him for advancing such an austere and intimidating vision of art. - Mitchell D. Kahan, 2001 1. The original color specified was Merkin Pilgrim gray, according to Robert Morris, 170. 2. Robert Morris, “Notes on Sculpture, Part II,” Artforum 5 (October 1966): 23. Berger, Maurice. Labyrinths: Robert Morris, Minimalism, and the 1960s. New York: Harper & Row, 1989. Robert Morris: The Mind/Body Problem. New York: Solomon R. Guggenheim Museum, 1994.