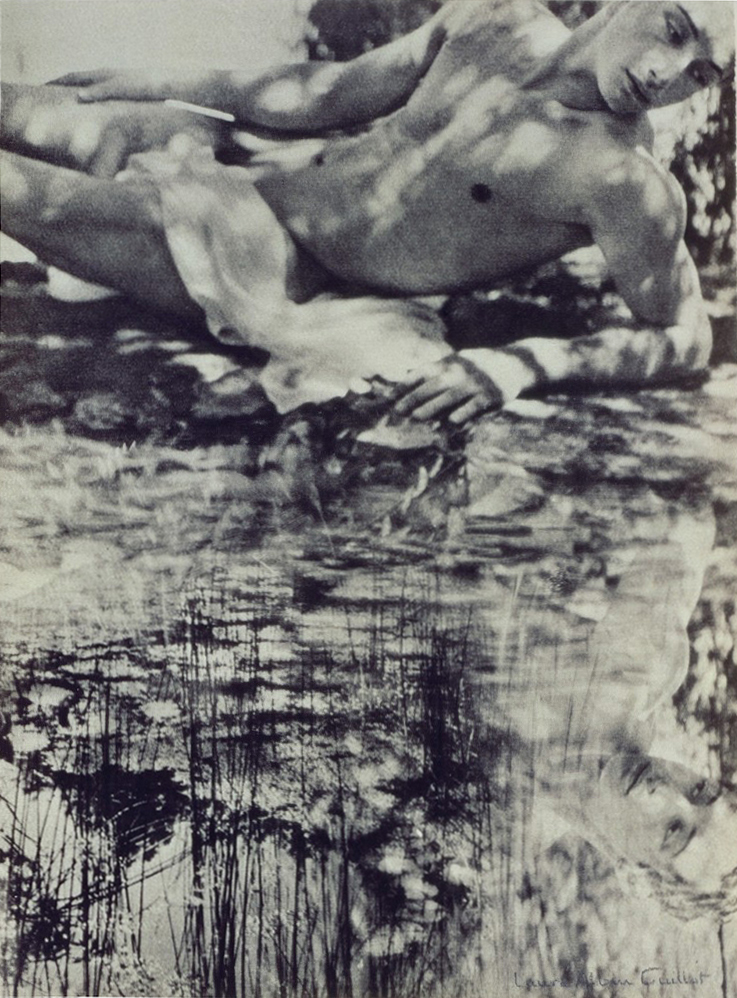 Narcissus, a character from Greek mythology, was a beautiful youth who spurned the affections of a nymph. In punishment, Aphrodite, the goddess of love, made him fall in love with his own reflection in a pool of water. He wasted away from unsatisfied desire and was transformed into the flower that now bears his name.

Laure Albin Guillot Narcisse (Narcissus), 1934 Collection of the Akron Art Museum "Photography," claimed Laure Albin Guillot, "must be true to life and sincere; it must likewise be beautiful."1 Working in Paris in the years when the New Realism (also called the New Vision) was replacing the Pictorialist style, Albin Guillot maintained an unabashedly romantic outlook, which can be seen in Narcisse. The image is based on the Greek myth of a beautiful male youth who spurned the love of a young girl, Echo, who then pined away until only her voice remained. In retribution, the goddess Nemesis caused Narcissus to gaze with everlasting love at his own reflected image until finally he was transformed into a flower. In the softness of the swirling forms and the languor of the pose, Albin Guillot created a dreamlike atmosphere that evokes beauty, love, and longing. Narcisse is one of a series of nudes and landscape photographs inspired by French author Paul Valéry's book of poems, Charmes. These images are not so much illustrations of the texts as they are poetic creations in themselves.2 Valéry, who was initially skeptical, praised Albin Guillot for having produced poetry equal to his own. The artist’s feeling for beauty remained constant during thirty years as a professional photographer, but her style showed considerable diversity, sometimes glorying in the blurred forms of Narcisse and other times assuming the crispness associated with the New Realism. Albin Guillot was active at a time when photography was only just becoming "the queen of illustration" both in Europe and the United States.3 With the perfection of halftone printing and the improvement in magazine paper stock, camera images became much more desirable as product illustration. Albin Guillot specialized in publicity portraits of well-known figures in French society, many of which appeared in periodicals, but she also did product photography for Omega, Renault, and the department store Bon Marché. For her own aesthetic satisfaction she produced landscapes, studies of nudes, narrative tableaux using dolls and figurines, and scientific images. The latter derived from her interest in microscopy, which she shared with her physician husband. The images were published under the title Micrographie décorative—a portfolio of twenty prints in a variety of colors and on unusual papers as well as metallic foil. The photographs appear to be abstract patterns but are in reality views of natural substances seen through a microscope.4 Unlike many of her contemporaries, for whom the image as seen through the camera lens was the single important aspect of the work, Albin Guillot regarded the mastery of photographic printing techniques as an integral part of the endeavor. "Few other photographers," it was said of her, "possess the knowledge and mastery . . . [and] take the same care with the execution of a work . . . as with the taking of the view."5 The sensual matte surface and unusual green hue of Narcisse are the result of Fresson printing, invented around 1899 by Théodore-Henri Fresson. The process was first employed by Pictorialists at the turn of the century and carried on by the inventor's descendants and others. In Fresson printing the use of pigment and carbon rather than silver provides greater permanence than gelatin silver printing and allows maximum control of effect in the print. Albin Guillot worked with Pierre Fresson (a descendant of Théodore-Henri) to master this relatively rare process, which she used primarily in her personal, rather than commercial, work. Despite her illustrious career in the forefront of French photography in the 1920s and 1930s, Albin Guillot's work was entirely forgotten very soon after her death. Only now is it receiving a deserved reappraisal. - Naomi Rosenblum, 2001 1. Quoted in the “Newsletter,” International Museum of Photography at George Eastman House (April 1992), 11. 2. See Bouqueret, 18. 3. Unsigned article, “La Photographie est aujourd'hui la reine de l'illustration," Photo Illustration 1 (1934), not paginated. 4. Albin Guillot, using the same subject and process, also produced decorative wall panels for the French luxury liner Normandie (later destroyed by fire). 5. Marcel Natkin, "La Nu en photographie," quoted in Bouqueret, 9 (author's translation). Bouqueret, Christian. Laure Albin Guillot ou La Volonté d'art. Paris: Marval, 1996. Rosenblum, Naomi. A History of Women Photographers. New York: Abbeville, 1994.